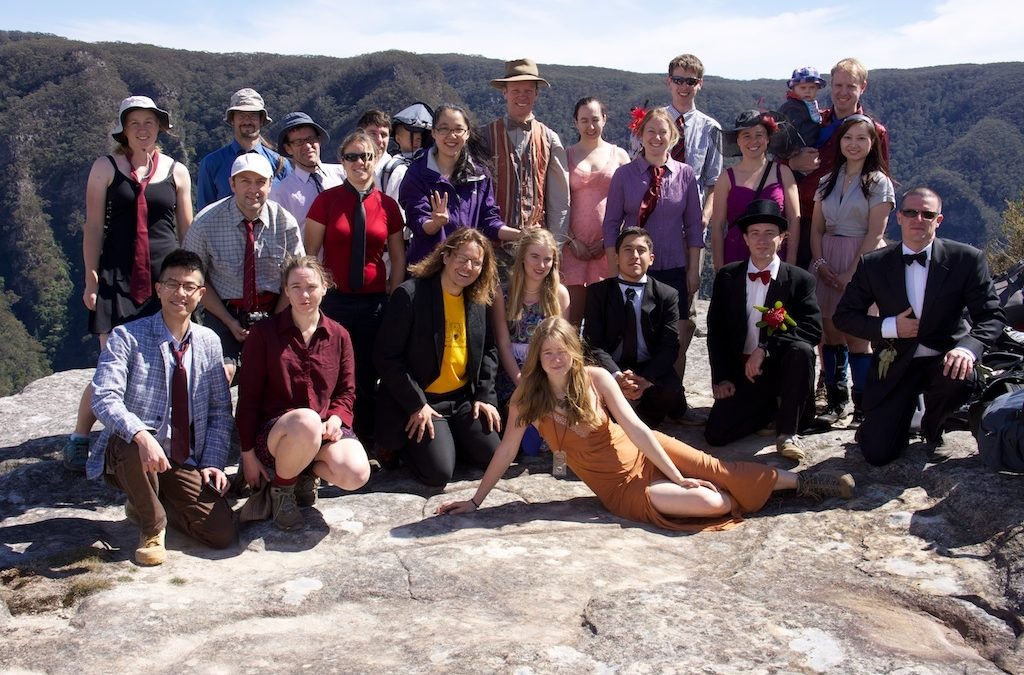 Ian’s Iphone has been lost to the icy depths of the Kowmung, Bec can’t find her car keys and there are tens of brown and black snakes lazing around in the dappled sunlight, forked tongues darting in and out, daring onlookers to move within striking range. And yet, there is a definite calm and peacefulness among the group of 30-odd bushwalkers. The afternoon light accentuates the vibrate greens and browns of the surrounding eucalypt and hanging cliffs, and hits the river water causing it to sparkle brilliantly. We are in Kanangra wilderness, witnessing an untamed beauty that stands in stark contrast against the backdrop of modern city living.

Whilst this is a realization that countless walkers have joyously made as they navigated this breathtaking landscape, it is unlikely that many have done so with 40 cans of beer weighing down their packs, or $100’s worth of whisky tucked safely into their sleeping bags. And there are fewer still, I would wager, that have done so while in formal dress and suit. But then this is the President’s Bludge Trip, or “PBT”, and it is not at all a typical bushwalking excursion.

The PBT is a SUBW tradition lead by the current president of the club and involves a two-night long walk along the Komung River, in Kanagra. And so, on the October long weekend, a small group gathered in the usual Kanagra campground. By mid morning the group had swelled dramatically until 29 walkers in total began to shuffle down the trailhead. After a brief delay, in which Helen decided to return to the cars to collect the forgotten (but necessary) volleyball net and ball, our group made steady progress across Bullhead range, stopping for lunch just before we reached Cambage Spire. As there were a few beginners on this trip, some of which had never been on an overnight walk before, descent from the Spire to the junction between the Kowmung and Christys Creek (our campsite for the night) was decidedly difficult and, therefore, slow. Needless to say, we eventually made it down with – it should be noted – little complaint, and there was plenty of afternoon sunlight to warrant a lazy set up of camp, and to enjoy a refreshing swim in the Kowmung.

As a young woman living in the heart of the inner west, I am familiar with the usual rowdiness that accompanies the consumption of copious amounts of alcohol. However, the older members of the Sydney Uni Bushwalkers are a rare breed of drinkers, and a combination of surprise nudity, wrestling, rude jokes and loud songs provided a interesting treat for the newer members of the club. After the hundredth verse of “the Wild West Show” and an extreme semi-naked wrestling match between T2 and Mr. Bean, we ended the night with the Bushwalkers National Anthem and a deliciously cold, nude dip in the Kowmung.

The next day had many of the beginner walkers questioning the term “Bludge”. Waking up before 10am and trundling through and along an endless (10km) stretch of river proved a bit much for some and was certainly not “an easy job or assignment”, as the dictionary of Google defines a “bludge” to be. Blisters were forming on blisters and legs were cramping, but again, little complaint was heard.

Early in the day a waterproofed Iphone was lost at a river crossing and the group split, several going on ahead and several staying behind to search for the lost item. But it was as if this place, so devoid of the technology we are use to, wanted to keep it that way, and the river refused to produce any sign of the phone.

Giving up the search, the second group continued on to meet with the leading walkers for a pleasant lunch by the banks of the Kowmung. But this journey was not without incident, as countless snakes – red-bellies, browns and pythons – were encountered, guarding the sunny spots by the river. Several close calls were realised as snakes struck at a few members of the party and thus all eyes flittered wearily about the vegetation, searching for potential threats. Once together again, the bushwalkers relaxed for a swim with lunch, only to be hit with another unfortunate occurrence in the form of a lost set of keys. The car to which these keys belonged held (apparently) important items and hence some of the group began to consider walking out early to retrieve the spares. After much discussion and only moments before Helen and Wilmo set off homeward bound, a second search of the bag in question produced the missing keys and the group rejoiced together. The walk to the campground at Orange Bluff was swift and we were rewarded with a rare sighting of a three-headed python.

Once at Orange Bluff, camp was set with the accompaniment of the volleyball net. A rather heated match ensued, and with the added entertainment of the ball shooting down wombat holes, all appeared to be having a good time. At this campground we were joined with another family-and-bub crew (Nicole, Dave and Ollie comprising the first crew), as well as the survivors of the winter safari kayaking trip in the snowies, Mitch and Chazza. This night was filled with Passion Pop, expensive whiskey, heated debates and massage trains, and ended with a rather awkward exchange between T2 and Monkey (seeing a trend here?). Thankfully no blows were shared and I could rest easy with the knowledge that despite all that had happened today, the required 80% attrition rate was maintained. For now…

In the morning, the group rose with much less faffing than the previous day, and the accent from the Kowmung via Brumbies’ Ridge was swift. More than halfway up the hill we stopped for lunch and a traditional jaffle on a 2-second campfire, trademark of the door sausage (seriously, how does he make fires so quick?), and then made good time up onto the top of the main range. We stopped for a longer break once at the top, many enjoying the view and some enjoying the feel of the cool wind across their exposed bodies, as they posed for the SUBW nude calendar. Some tourists arrived mid photo shoot and seemed to enjoy both views. Thank God for Europeans…

Donning clothes, we all made it back to the cars and with farewells to some of the group, headed back towards civilization for a meal at the Mount Vic pub. All in all it was a fantastic trip, which couldn’t have come together without the help of Tom Murtagh, who organized everything in my absence. Thanks go also to all those in attendance, who made it such a memorable experience. Even the shitty incident could not mare my admiration for the group, whom I hope to adventure with in walks to come.

The trip also proved a great opportunity to show off the beautiful, new SUBW t-shirts, which are not only comfortable, but are also quick drying and stylish *pulls a flashy salesperson smile* Why not order one here: https://www.subw.org.au/product/subw-t-shirt/