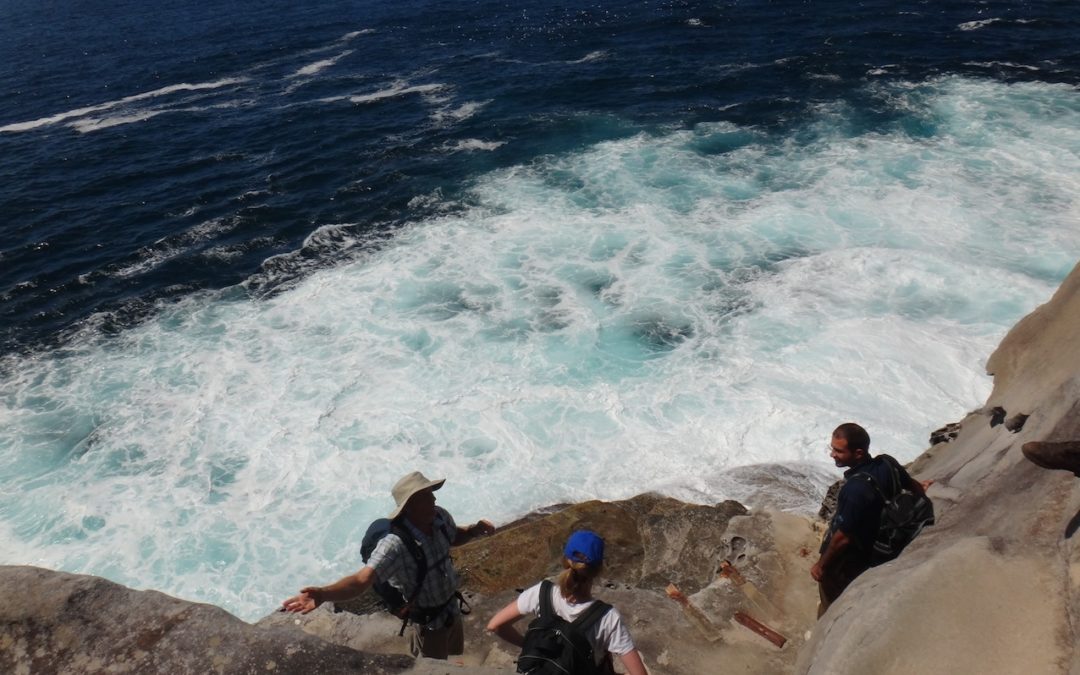 I grabbed two chocolate croissants on the way to Manly Wharf to meet everyone at 9.10am. Then it was off to the beach via the $2 shops to buy $5 hats for a couple of people in the group. Manly beach was already filling up with swimmers and we were in a for a great day.

We followed the foreshore footpath to Shelley Beach, up to the car park and then down the gully (near entrance of the car park) to the rock shelf below. Despite a 2-2.5m swell this first section of the walk was protected and tranquil as the swell was from the south and was not wrapping into this corner of the coast.

The rock hopping began straight away and the group spread out quickly as different paths through the maze were taken. Some took a little while to find their rock hopping legs (and these are really needed!), others bound on to explore the rock shelf ahead, find some shade under a big rock, try out a few bouldering moves and check out a rope that was hanging the full length of the cliff (this may be a good place for some abseiling).

Two whales were spotted nearby, a mother and a calf we guessed. The calf was in play mode with many tale splashes before they headed underwater and mostly out of view. We continued on to the corner where some steel rods had been put in place to act as hand holds in an area that can get quite slippery. Other forms of assistance on this walk include hand and foot holds carved into the rocks in steep places, 2 hand ropes, and the tell-tale marks from fishing shoe cleats (to help with grip on the slippery surfaces) letting you know the most common path, and of course the ladders at the end of the walk.

After the corner we headed to the top of the now not so high cliffs and walked an easier path to Bluefish Pt where we had a bite to eat and took time to assess the conditions ahead. It was now about 11.30am. Despite the eagerness of some, including me, to walk the second part of the bottom of the cliffs walk (Bluefish Pt to the entrance of the harbour), the large waves on this exposed part of the coast strongly suggested otherwise.

Phillipa decided she was well satisfied with her efforts so far and had a nap on the smooth rocks. The rest of us went down the down the access route, a several metre steep climb down but with many easy hand holds, a hand rope and the ever ready Kristian offering reassurance and tips for how to stay safe. The group were really supportive of each other and went about there own ways of calming their nerves when they felt unsure…. and then we were all down.

We headed round the corner to the majestic cliffs and a more open rock shelf that was clearly being pounded in places by the big waves! It was now very clear we weren’t going further! And then we spot 4 guys in bare feet and board shorts who had gone down to the rock pool for a swim – lucky they didn’t get swept out to sea!! We will have to go back when the ocean allows us to enjoy that rock pool and the bouldery path to North head.

Back on top of Bluefish Pt, we walked up the fairly steep slope, then around the fenced boundary of the sewage treament plant (this was not exactly a wilderness trip), and along various paths to the cafe at North Head. Several ice creams and an ice coffee later, and after finding Kristian and Almuth stretched out in the boughs of big trees, we continued on past the expansive views of Sydney Harbour to the main look outs.

The first lookout faced north and revealed the much more difficult second part of the walk, with all the large boulders that need to scrambled over and around. This is rock scrambling heaven. The big waves, however, were clearly making the path narrower than desired and it was clear we had made the right decision to not go there today!

A bit further round, just before we jumped the fence, Heidi, Lance and Phillipa (who was really keen to have a swim) headed off back to Manly, home and other friends. The remaining 7 took cautiously to the ladders and went down to the rock platform below…. we wandered around for some time, did a little climbing and exploring then came back towards the ladders to get out of the now cooler wind.

It was now time for Alice and Natalia to head off . I went with them up the ladders and farewelled them safely on top of the cliffs. When I got back Kristian, Almuth, Hossein and Luiz were all stretched out on the rocks taking it easy! We chatted for a while then headed back up the ladders and off to the North Steyne Hotel for some dinner.

On route back to Manly Wharf we were surprised to find the much talked about bakery near the Four Olives Deli was open but sadly out of chocolate croissants. I didn’t pay much attention to time in the afternoon so can’t really tell you how long the walk was….. Hopefully next time the ocean will be calmer and completing the second part of the walk will be possible.

It was a great day and many thanks to everyone for their relaxed approach and the general support we gave each other on what was a challenging rock hopping experience!

General information: The full walk is best done from September to May – this is when all sections of the walk get enough sun and so the rocks are not so slippery – and also best with a swell of 1m or less. The rock pool near Bluefish Pt is a great place to go swimming.