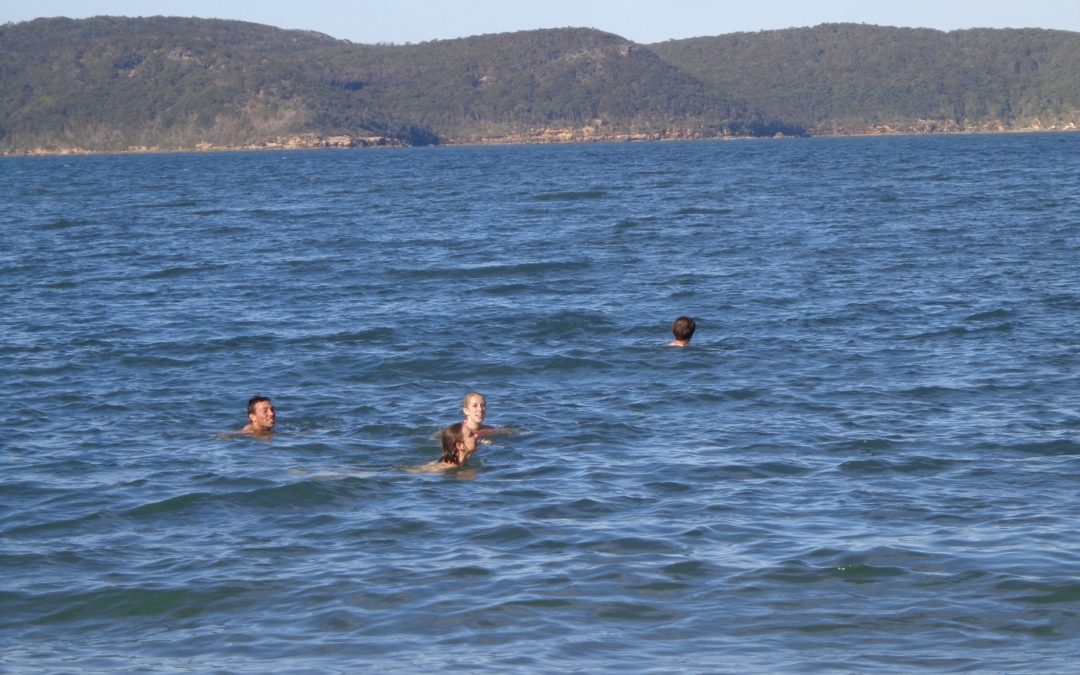 Again despite the weather forecast it turned out to be a nice fairly mild day for the walk. I met up with the walkers at Wondabyne Station and after the customary advice to look out for snakes, we immediately set off up the fairly steep climb to the top of the ridge above Wondabyne. This is the steepest climb of the walk and it is good to get it out of the way right at the start. This is part of the Great North Walk (GNW) which we follow as far as Warrah Lookout, about 18km further on. On the way I pointed out the tiny Sundews – carnivorous plants – which eke a living from the poor soils in a hanging swamp by snaring unwary insects. (see photo).

We continued down in the valley of Myron Brook, where a photostop was made, and then on over a small ridge to Kariong Falls. Here however we found a quite large group of teenagers having a break here; it turned out they were not scouts but students from Rouse Hill High School on a Duke of Edinburgh outing. So we didn’t stop here but continued up the next grade to the top of the ridge which carries a firetrail/railway access road, which we followed for a couple of km. The track then veered off this trail and cuts cross country to Tunnel trail via a series of very large slabs of rock – a feature of this area. On the way I pointed out the site of Aboriginal tool-sharpening grooves. A short way along Tunnel Trail the track branches off towards Mt Wondabyne, and as it climbs becomes rather stony underfoot. Along the way we signed the NPWS log book. Then it was up to the top of Mt Wondabyne to have luch, making it in good time shortly before midday.

During lunch we were visited by one of the only two reptiles we saw that day – a large Skink. The day was very clear and haze-free and we could see the Blue Mountains in the far distance. In the other direction was a great view of the sea.

After lunch we headed off along the GNW which crosses some even larger and massive rock slabs before going down to cross a small creek in a mini Palm Jungle. A crow objected to our presence here by saying Aaaaaaahhhhk, Aaaaaaahhhhk, Aaaaaaahhhk, which amused some of our company. After it climbed out of this creek the track levels out and becomes somewhat boring as it passes through scrubby country before reaching Patonga Road. We crossed Patonga Road and followed the road to Warrah Trig, being the only true road bash of the walk (apart from a bit at Pearl Beach). From Warrah Trig we walked to Warrah Lookout for the fine views over the Hawkesbury River and Pittwater. After Warrah Lookout we left the GNW (which goes to Patonga from here) and headed down to Pearl Beach, through much more pleasant forested country. Along the way a large cave was spotted and a brief stop was made to explore it. Then it was off to the end of the track at Crystal Street. We made a slight detour to check out the Crommelin Native Arboretum nearby, but as the afternoon shadows were starting to lengthen, and we still wanted a swim at the beach, exploration of the Arboretum was left for another day, and we headed for the Beach.

After some initial trepidation given the cold water, most of the party eventually went in. For Aussies it was still a bit early in the season to swim; there were plenty of family groups there but almost nobody in the water. Still, by European (and North American?) standards it was a normal summer’s day. After enjoying a swim, we made our way to the bus stop for the one and only afternoon bus to Woy Woy. Thanks to the driver making a wrong turn at Umina the bus’s arrival at Woy Woy was only 4 minutes before the express train to Sydney arrived, and despite the ticket machines refusing to allow purchases of concession tickets (had to get the concession tickets from the manned window – some silly recent rule), everyone made it to the platform about 30 seconds before the train arrived. I said goodbye to all while I waited for my own train going further north.

This was an enjoyable day enjoyed by all, especially some who were experiencing their first bushwalk.

There were no “no shows”. One person, however, got to Central on time but got on the wrong train! He simply noted that a train departing at 8.15am was stopping at Wyong and got on it. By the time he realised his mistake it was too late – the 7.46am train had just left. All I can say is – please read all your email instructions about walks carefully.