Helensburgh to Otford via Burning Palms 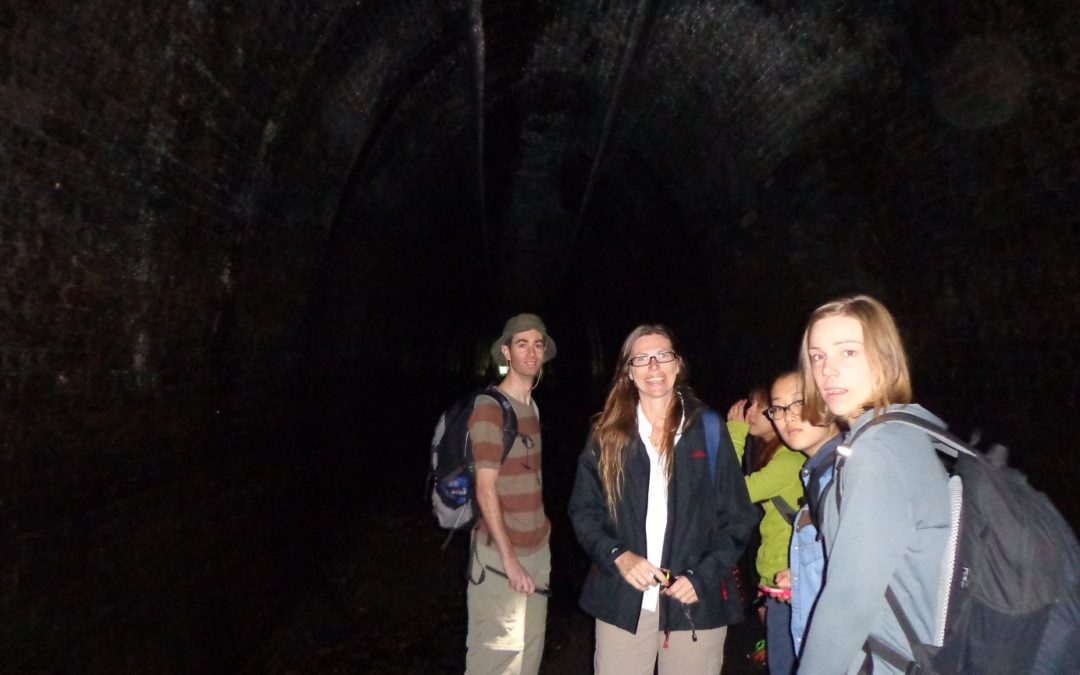 The original weather forecast for the day was for “occasional showers” which for me was a bit of a worry given that I was coming out of a bout of Bronchitis which had been difficult to shift. As it turned out, the rain fell the night prior, and the day turned out to be nice.

After meeting up at Central station we headed off by train to Helensburgh Station. From there we walked to the Metropolitan Tunnel which, thanks to the previous night’s rain, was rather muddy and slippery underfoot at the entrance. As we walked in, it became a bit further underfoot, and we turned on our lamps to guide the way. Headlamps are OK for cooking over campfires but don’t quite cut it in a full-sized railway tunnel – they barely penetrated the gloom. Steve couldn’t resist making loud ghost noises, and I asked for quiet as not only could the noise cause the glowworms to switch off, but I also detected a faint but distinct sound coming from the depths of this (presently) dead end tunnel. It was a “doom-boom, doom-boom” sound, which made me wonder if a Balrog had been awakened. Not only that, but Katya’s shoes were glowing bright pink at the edges – were there Orcs around? (It turns out that Katya’s shoes always glow bright pink). Anyway on switching off the lamps we spotted some glowworms on the ceiling but not in great numbers. Again we had the problem of a dead-straight tunnel letting lots of light in. So we left the tunnel, and headed up Tunnel Road, turning right into Foster Street as it was safe, having a footpath.

On this street we came across a London bus which looked liked it was 1950’s vintage. The it was off along the “service road”and then along the track skirting the Helensburgh garbage dump until we reached the start of the Burgh Track. It gradually went downhill into the valley of the Hacking River, with a luxuriant rainforest surround. Then it was off on a track marked just with an arrow by NPWS, which before it reaches the Hacking River peters out altogether. Anyway we reached the River which was up a bit, which required some balancing acts to avoid a dunking.

After the crossing we encountered the Lady Wakehurst Parkway and crossed it for the uphill slug to the Garawara Farm carpark. There we encountered a group heading back to Helensburgh and we advised them about the non-track at Hacking River. From there it was down hill to Burning Palms Beach, with fine views of the Illawarra Escarpment on the way. Down on the beach we found we had to get shelter from a quite strong SE wind, which also had made the surf unsuitable for swimming.

After lunch we headed towards Otford along the Coast Track, passing through Palm Jungle which delighted Almuth (no palm jungles in Germany). Passing through the open Lomandra we noted that construction is happening apace on a new walkway which will when completed eliminate the path which presently goes through the WW1-like trench. I suppose it was about time as the deep erosion on this popular track was threatening the ecosystem.
Anyway we eventually reached the Cliff track atop the escarpment, and from there it was an easy walk to the Otford Pie Shop, where wer had coffee and hot chocolate. Then it was off along the very short but steep track (the steepest part of the walk in fact) to Otford station for the train back to Sydney.