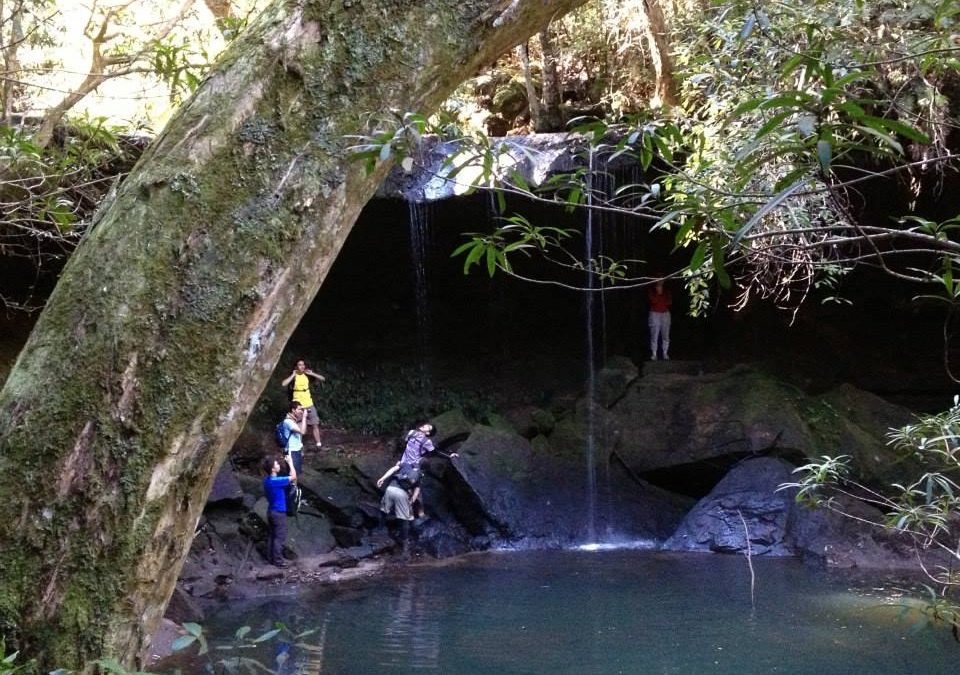 The group can be bigger, sadly Phillipa and Linjing was called in sick couldn’t made to join our clew, 12 people for my first time leading trip is already a good challenge for me.As the plan set up we meet at Stratfield station no later than 9:20am waited for the 9:31 train, except for Louise, Pedro and Christian, who were coming from Central station. I had a smart plan of letting them all stay in the last carriage of the train therefore we could all jump in to meet them when the train approached to stratfield. However, Pedro misunderstood the meaning of “the last carriage” which he actually sat at the first one, Louise just sat at somewhere middle of the train and only Christian sticked to my master plan stayed nicely at the last carriage. Reality always going opposite to my dream, I wasn’t prepared for tones of people squeezed in the train that we couldn’t actually stayed in a single carriage, we split up eventually.

There were a few easy turn around from springwood station to the walk entry, and I was assisted by google map, still pretty embarrassingly turned into the wrong street next to the entry, walked down to 200m until I found out it was something wrong, really bad started, we were not in the bush yet !!!

Finally we made to the entry, everybody tidy up and I revised 3 times of the track map on the guiding wall, we headed into the bush. At the first 1.5km was consistently steep walk down, some of us started getting worry if we need to climb up with the same steepness when we came back up, once we saw the sassafras creek, the track became flat and smooth, while we were start getting relief from the rough downhill and looking around the nice view taking pictures of the creek or the trees embellished by the dotting sunlight, challenge was shown up as some hundreds years old huge tree trunk had fallen down ages ago blocked right at the middle of the track, not only the big size but the slippery of the surface had increased the difficulty to climb over, good job for everyone had successfully made it although with a series of awkward position. 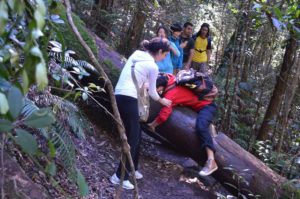 Continue down the track, we arrived the first campground which I believed was the perch pond, I was wrong again, well there was a dry surface of Sassafras creek right next to the campground but Louise pointed that there were nothing looked like a pond. We all walked out the the dried creek bed to chill out and took picture, poor Atoosa slipped as I told her to feel the chill mountain water, the rocky surface was so slippery she couldn’t stood back up until a few hard tried, luckily she didn’t get herself injured and it was only an almost dried out tiny creek, and the girl was strong enough to show her smile face to say such a good experience to swim in winter.

As we walked down kept the Sassafras Creek on our right, the path was still relatively flat and straight, we progressed quite fast people at the front leading (I think was Matthew) walked like wing as we were all quite energetic, on the way we saw quite a few people walked from another direction, kindly said hi to us. Soon we reached the next check point which was the REAL Perch Pond campsite, it signed that we were half way through the walk, everybody spotted a nice place to sit down comfortably and grabbed out their lunch to fill up the empty stomach, enjoy the time before we went for the gradual uphill walk. 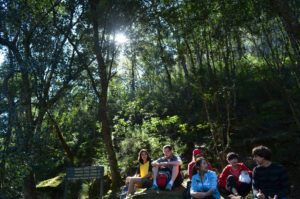 The lunch took about 30mins, while until everyone had recovered we started walking up to finish the rest of the trip. About 350m from the Perch Pond, a small waterfall call Martins Fall on the right hand side of the path, a fairly big chamber under the falls could fit few of us as we walked inside to look out, I think it is not the raining season now, I can’t even call it as “waterfalls”, more like a “water tap”. 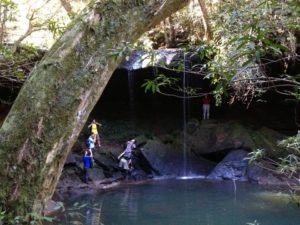 Time went more quickly on the way back, we didn’t even realized the walk almost finished until we saw the intersection with a sign pointing springwood station and the Lawson lookout, we all voted to go to see how was Lawson lookout like as we still had enough time to waste. Honestly, the lookout was quite disappointed, the platform was not high enough all the view was basically blocked by the trees around, nevertheless, we got a place to chill and took the group picture before we headed out the bush. 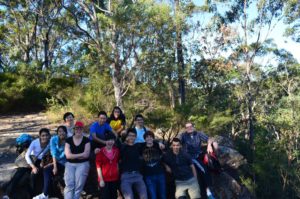 Everybody did extraordinary good job that day as the track note said this circuit would take about 4:30 hours, we only took 3:45 !! With such huge amount of people, and we did a side trip, plus plenty of time of resting, I am so proud of them as no one turned gas before we left the bush!!