Leura to Katoomba via Dardanelles Pass 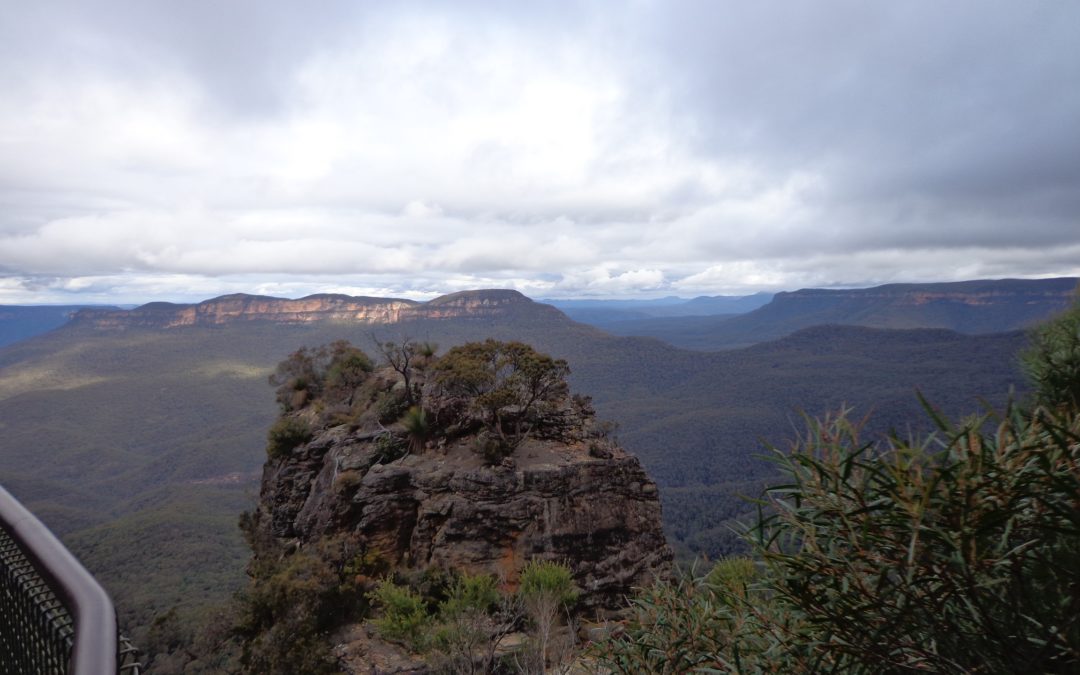 My run of luck with good weather on recent walks held up again as I left home on saturday morning under a clear starry sky, despite the radar showing a rain cell sitting on inner Sydney.

I met up with Anne at Central Station, and with one person calling in sick, and other with urgent family business, and unfortunately a couple of simply no-shows, we boarded the 8.18am train along with what seemed to be a coven of wicked witches heading to the Mid Winter Festival at Katoomba that day.

At Strathfield Nicola joined us and Conrad at Parramatta. Eventually we reached Leura to be greeted by very crisp air in sunshine. From there we walked down Leura Mall to Lone Pine Avenue. Instead of heading straight to Gordan Falls Picnic Area – the “official” start of the Leura to Katoomba tracks, we detoured to the left of Leura Oval to go via Lyrebird Dell and past the Pool of Siloam. We eventually reached Gordon Falls picnic area via a set of steps that never seemed to end. There we took in the view over Jamieson Valley, the Kings Tableland and Mt Solitary. From there we set off along the Prince Henry cliff-top track, with a slight detour to bypass a dodgy bridge which NPWS has declared “unsafe”. We were spoiled for views along this section, with a spectacular viewpoint every 100 metres or so. Soon we came to the junction of the Cliff track with the start of Federal Pass, which makes its was down into the valley via fern-lined mossy glens to Leura Cascades, were we stopped to enjoy the view of this feature. From there we continued along until reaching a track junction marked “Federal Pass”. There was a track going off straight ahead which must go deeper into Jamieson Valley – maybe to be explored another day.

Not far from that track junction we turned off on a “by=pass” top have lunch under a sheltering overhang. Lunch was kept short as we found that on stopping we soon started feeling the cold.

It needs to be remembered that Darnanelles Pass is actually a branch track off Federal Pass, not vice versa as some maps seem to imply. Therefore “Dardanelles Pass” will not be signposted until its actual start (more on that soon).

Anyway we reached Leura Forest with its picnic area and old pergola. This is where Dardanelles Pass actually starts, and is not well signposted. It is marked by a fading wooden sign that is not very obvious. This Pass is not in great condition but is easily graded, staying somewhat above the level of Federal Pass below. It also passes through cool shady rainforest. We frequently heard Lyrebirds close by but, as is normal with this bird, did not see them. Before we knew it we had arrived at the base of the Giant Stairway, which climbs steeply via over 800 steps to the top adjacent to the Three Sisters. At the base we came across three German girls (from Leipzig and Berlin), who, having just come down the stairs, asked about the cost of the trip back up on the Scenic Railway! So, up the stairs we went, stopping at very frequent intervals to catch our breath. But we made it and enjoyed a rest and another great view. The exertion of climbing the stairs was such that we could take off jumpers and walk around Echo Point in t-shirts for a while, despite the 8 degree temperature.

The last part of the walk consisted of a road bash along Lurline Street to Katoomba Street and the Mid Winter Festival. We found that the main street was closed off and filled with crowds attending the stalls, with lots more wicked witches and other sorts of fancy dress. By this time a very fine light rain had just started (I reckon it was melted snow), and we made our way through the throng to Katoomba Station, arriving just as the Steam trains was just leaving. We got on the 3.25pm train back to Sydney, arriving a bit late due to trackwork and also the steam train having priority at Westmead. On reaching Paramatta we were back into the rain cell. It was pouring at Strathfield and I hope Nicola didn’t get too wet on her bicycle trip back home from Ashfield, This was a very enjoyable trip with no shortage of views and waterfalls.