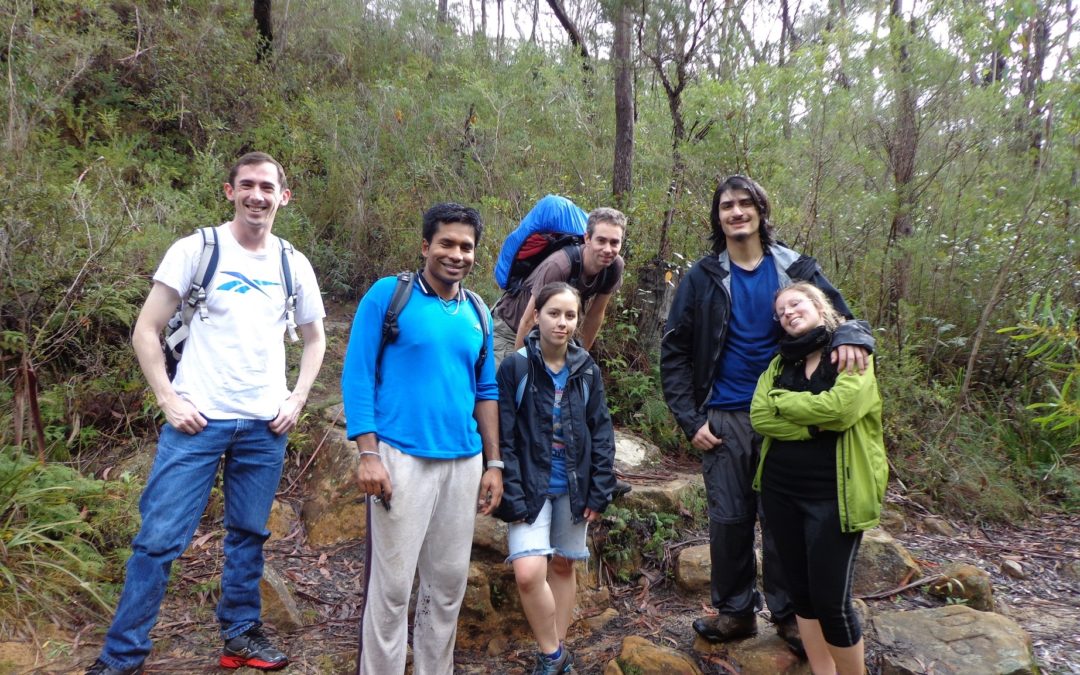 Having anxiously watched the weather development over the weekend, things were looking hopeful on saturday night when the radar showed an area of immunity to the rain around Katoomba and Lawson. Early on sunday morning it took an ominous development when the radar showed heavy rain in the same area. Still, we haven’t had yet to cancel a Blue Mountains walk due to rain, and I didn’t want to now. We lost one potential walker due to an unfinished assignment, and another called in sick. So five of us met up on Central station (with Siva having been initially misdirected to the wrong platform – bad, Cityrail) and set off on the 9.18am train to Lawson. We picked up Martin and Conrad along the way. Shortly before departure the rain had recommenced and in fact got heavier around Penrith. Near Werrington we saw our first (and only) wildlife, wallabies in the woodland of the UWS Campus there beside the line.

The rain continued all the way to Lawson, although it seemed to have become lighter by Hazelbrook. We got out at Lawson station with rain still falling, and also a cold south wind had come up. We briefly wondered if the 8km walk would need to be shortened to 80 metres – the distance from the railway to the pub. But we decided without too much thought to “press on regardless”. At the station we looked for an eighth potential walker who was coming by car to meet us there, but having checked out the cars in the car park (all three of them) we decided that the weather had deterred him and so we set off along St Bernard’s Drive to the start of the walk. On this road it had been so wet we encountered our first water crossing, and we were still on tar. Even so, while we stopped in the park for a loo break, and just 5 minutes into the walk, the rain stopped, and didn’t return. Thus my decision to start the walk an hour later than normal paid off, as otherwise we would have spent the first hour walking in rain.

The decision to follow the route taken by Tim Vollmer on a previous walk also proved to be the best (most internet guides suggest starting at Hughes Avenue). So we entered the Empire pass at Wilson Park, and from there it soon descended down many steps to Dante’s Glen, and impressive ampitheatre with a waterfall. From there we continued along the track following the creek, which was running full after the rain. We had two crossing points along this creek, and care had to be taken to avoid slipping on the slippery mossy rocks. Not only that, but rocks which would normally be stepping stones were submerged. The creek itself runs through a gully with steep sides (almost a canyon) and with lush vegetation which glistened in the wet. It also provided shelter from the cold south wind. After one tricky crossing requiring care and holding onto tree branches, we started to ascend along a track taking us through a fern-lined gully until we eventually reached Frederica Falls, which are actually a cascade rather than falls. Still it was running full and mad a fine sight. Below the falls is a deep waterhole suitable for swimming in summer. At this point the sun at last came out to warm us, and we could now see patches on blue sky.

At that point there was some initial confusion caused by someone putting extra comments in Textra pen on NPWS signs about the best direction to Echo Point, our lunch destination. We got the right track, which was in fact the fire trail going fairly steeply uphill until a locked gate and then a track to the right which led to Echo Point. The name is optimistic as it would better be described as “Echo Bluff”. Here we stopped for lunch. Also, some of us took the opportunity to remove leeches collected along the way through the damp gully. One almost became my lunch as it inexplicably was on my had heading towards my sandwich! As Echo Point is high up we started getting the cold wind again, so after a while we moved off again along the “high” section of Empire Pass until we reached Fairy Falls, with its curiously yellow coloured rock. It was also running quite full. Then it was onto the last leg of the walk back to our start point near Wilson Park, where we encountered some locals who had been encouraged out by the appearance of the sun. Then it was the final leg of the walk to Lawson town. At the station we made a decision to spend an hour in the pub and local cafes instead of catching the next train back, which had in fact appearing approaching the station. So it was off to the heritage-listed Blue Mountain Hotel, where we instantly tripled the patronage in the bar; it seemed many tourists had been deterred by a Mountains visit by the earlier rain. After beer, and a coffee later, we arrived back at the Railway for the 3.44pm train back to Sydney, which we reached slightly late at 5.40pm.

It was a very interesting walk in an area which is often overlooked by walkers but which has much to offer. It certainly rewarded those who took a chance on the rainy weather and persevered to come along. For Rachael it was her first ever bushwalking trip and we hope to see her on more.

Empire pass is no touristy pushover walk; there are dodgy creek crossings along the way even in dry weather. Care needs to be taken at several spots. Even so it would be a great walk for summer, providing cool air and shade on a hot day as well as swimming opportunities.

Also, I would mention that if a walk is to be cancelled at short notice, I always try to contact people individually by SMS. So if you don’t get one, you can always assume the walk is on. The member who was driving to Lawson actually did get there and waited in his car, but apparently missed us during the very short time we walked along Loftus Street before turning off into St Bernard’s Drive. I recommend that if you are driving to a station to meet other walkers, it is best to go onto the platform to meet the train.