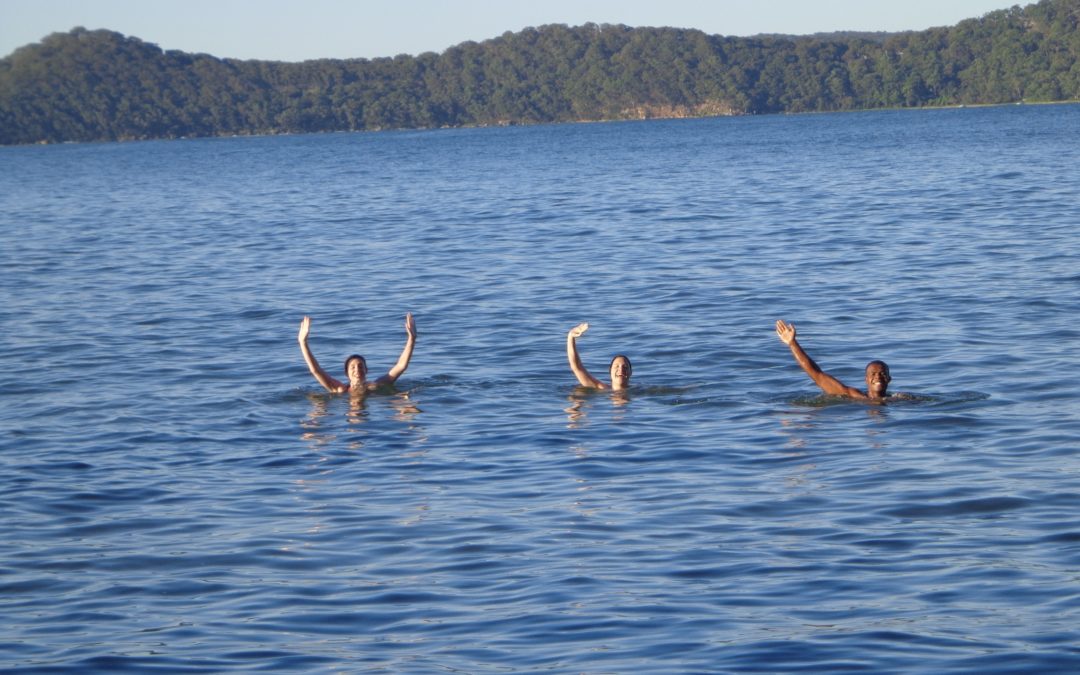 We were minus one person who sent his apologies, and another who realised too late that she was supposed to be a Wondabyne by 9am, not at Central by 9!

We all met up at the little Wondabyne Station around 9am, and proceeded up the steep hill to the top of the ridge, then along the local section of the Great North Walk, reaching the track junction with the Girrakool track. It promised to be a fine sunny day under a cloudless blue sky. The earlier than usual start also meant that we heard lots of birds which were out getting their breakfast of nectar. Hardly saw any though.

Then it was on to Kariong Brook via Myron Brook, stopping to admire the tiny carnivorous Sundews growing beside the track in a swampy area. We had a brief halt near Myron Brook while a Certain Person back-tracked to find the phone which had dropped out of her pack. Fortunately she didn’t have to go too far. We stopped briefly to admire Kariong Falls, with my advice that despite its use by locals it’s not a great swimming spot because there is a Scout camp upstream! After the steep climb out of Kariong Brook we stopped to sample the nectar from Banksia flowers, which also explained the presence of so many birds all along the way.

Eventually we came to the fire trail/railway access road from Staples Lookout, and continued along it for a while through forested country, then turned off on a cross-country track through the scrub to Tunnel trail, stopping en route to look at the Aboriginal tool sharpening grooves on a large rock platform. We turned off Tunnel trail onto the rather stony track to Mt Wondabyne, signing the track log book on the way (this is still part of the Great North walk). Then it was up to the summit of Mount Wondabyne, which is the highest point along the Coast between Sydney and Port Stephens. On such a fine day it was possible to see the Blue Mountains. There we settled down to lunch, having made it to the top just before noon – good timing. Also the wind, which had up to then been blowing rather cool from the south, died down just as we started lunch, so we had a good lie down in the sun.

After lunch we the set off along the section of the Great North Walk which goes to Patonga, although we were not going that far. This section crosses several very large rock platforms which are in fact just a single massive rock. After a series of these it then dropped down to cross a stream in a little valley of Cabbage Tree palms. before then going onto a road which passes through scrubland to eventually reach Patonga Road.

Then it was along the boring dirt road to Warrah Lookout where we were rewarded by great views across Pittwater, Palm Beach and the Hawkesbury River. Here we left the Great North Walk to go down the track to Pearl Beach, which we eventually reached at 3.20pm, exactly an hour before the bus was due (the one and only bus in the afternoon from Pearl Beach). This left plenty of time for coffee and a swim, and 5 of our walkers actually did so. Even though the beach was starting to go into shadow they braved the water, which as I had predicted was not all that cold; in fact as they went further off the shore, the water got warmer. Still, Johan made the observation that it was warmer in Norway at present than it was in Sydney. Meanwhile a flock of Lorikeets arrived in the tree directly above where we were sitting and some packs (and people) got “bombed”.

After our break at Pearl Beach it was onto the bus to Woy Woy (we doubtless improved the passenger statistics for this normally lightly patronised service). We made it there needing a wait of only 5-6 minutes for our trains. Mine came in first and I said goodbye to the others, and we all hope to meet again on future walks.

This was a very enjoyable walk, under open skies in good weather. No leeches, no snakes, no bull ants either!