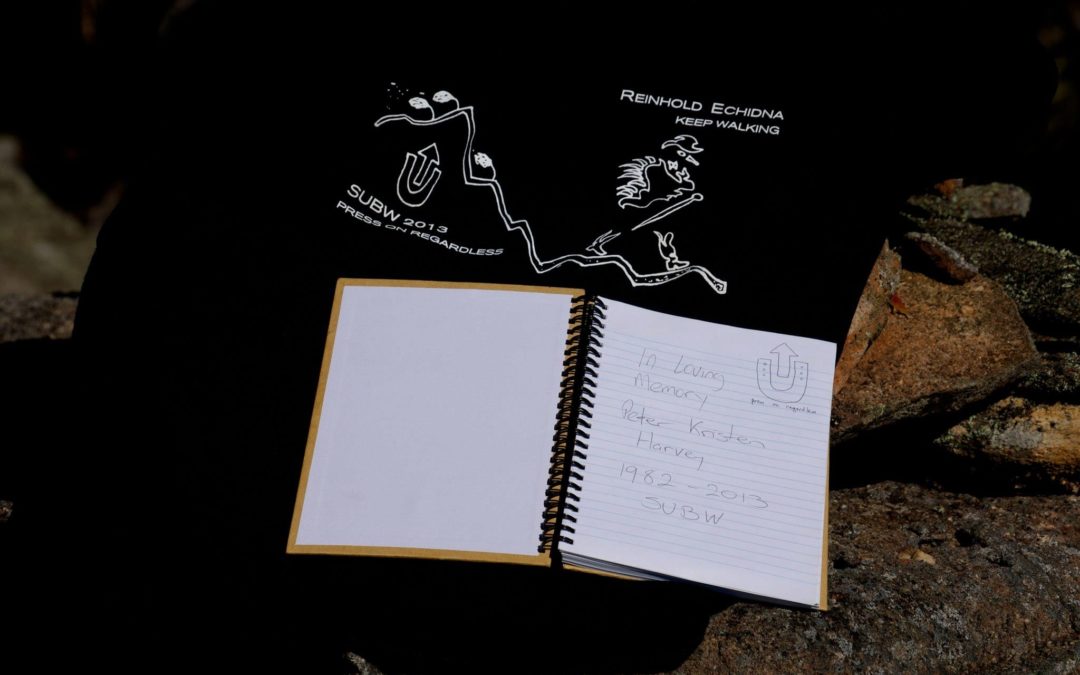 Mount Harvey is an unassuming local high point in the Capertee Valley somewhere between the Red Rocks and Pantoneys Crown. Many’s the time we looked out from Mt Dawson or over the Ben Bullen sheet and fingered it as a weekend target for a walk with Pete Harvey, but in his absence it seemed a suitable tribute. There was an astonishing response, I’ve never organised a walk so quickly with so many people, so many walkers who have shared trips with Pete over the years.

A few of us had been to the area last year for an excellent walk from Cape Horn through to Newnes (entailing a complicated multi-party car shuffle), so I knew the walk as far as Hughes Defile at least was open with some minor scrambling in places, albeit slow going, with tricky route-finding. Fortunately we had our secret weapon — Fritz — who has a prodigious memory for such routes. The main group set off about ten in the morning along the Great Dividing Range, and followed the easiest possible path between the pagodas and miscellaneous ironstone labyrinths that mark the area. The party was assured of an easy path as Oliver Lee (aged 6 months) was in attendance on his first overnight trip, and there had apparently been very little preparation in the way of baby-sized rapel harnesses and climbing shoes. C’mon people. Do your homework!

James and I, though, got a late start, some three hours behind the rest, and so he was subjected to my increasingly hasty, nasty “navigation” as the rough pad over the tops ducked, weaved and vanished, and sunset’s threat came upon us. There were a few shortcuts of dubious efficacy, more than a couple of longcuts quickly handwaved away, and very many vocalisations that can never make it to print, not least or uncommon of which wishing that we had Fritz in our group.

With exceptionally heavy bludge packs we pulled some fine bushwalking out of our fundaments and made it to a plateau overlooking Pantoneys Crown for a gorgeous crimson sunset. A trio of jackets at the far end tempted us down what the map assured us was the wrong spur (who is to believe cartographers anyway?) but we found the rest of the group at camp, basking in the last rays and toasting Pete. There was a lot of toasting that night. There was even a Wild West Show and a half-hearted performance of Gangnam Style from the new songbooks! It was like a PBT writ small, high and dry, a hundred miles away from the Kowmung.

In the morning we struck out early for Mt Harvey but due to the large group size, pathological pagodas, and a misplaced scrambling rope, we made it only so far as the large rock structure at about MGA231346. This is a sublime spot with magnificent views not only of Mt Harvey, but of the Red Rocks, the Crown, Tayan Pic and the Capertee to the north. We held a quick group discussion and unanimously decreed the point as Peak Harvey, named after the man whom we chased up so many a peak.

We installed a logbook and shared a terrible sombre too-early farewell to our dear friend, in a beautiful beautiful part of the world.

The walk back over the tops was a more organised affair and we made great time, even with a (successful) detour to locate water in one of the canyons off to the side of the Harvey plateau. We reached the cars with plenty of daylight to burn, and two-dozen-odd walkers shook hands and hugged and went our separate exhausted ways; back to the mountains, Sydney, and well beyond (I am given to understand that it takes even longer to get back to Wellington than it does to Arncliffe, though I’ve not seen any numbers confirming this). It will be quite some time before we leave Peak Harvey completely though. This was a bittersweet experience. It brought me great joy to see so many old friends and great bushwalkers come together in this magical place. But it is hard, so very very painful, to imagine a lifetime of such walks without Pete.

So, we still haven’t made it to Mt Harvey. Obviously more walking is required. A reversible way from the south looks tricky; there is tell of a pass of some lesser quality near Mt Dawson which may be a better shot. We’ll probably try that next. We have burly bushwalkers. We have scribbles on map sheets. We have overlapping free weekends, we have vague tactics, and we have an iron resolve to get up that blasted peak. We’ll press on regardless, even if we have the time of our lives doing it.