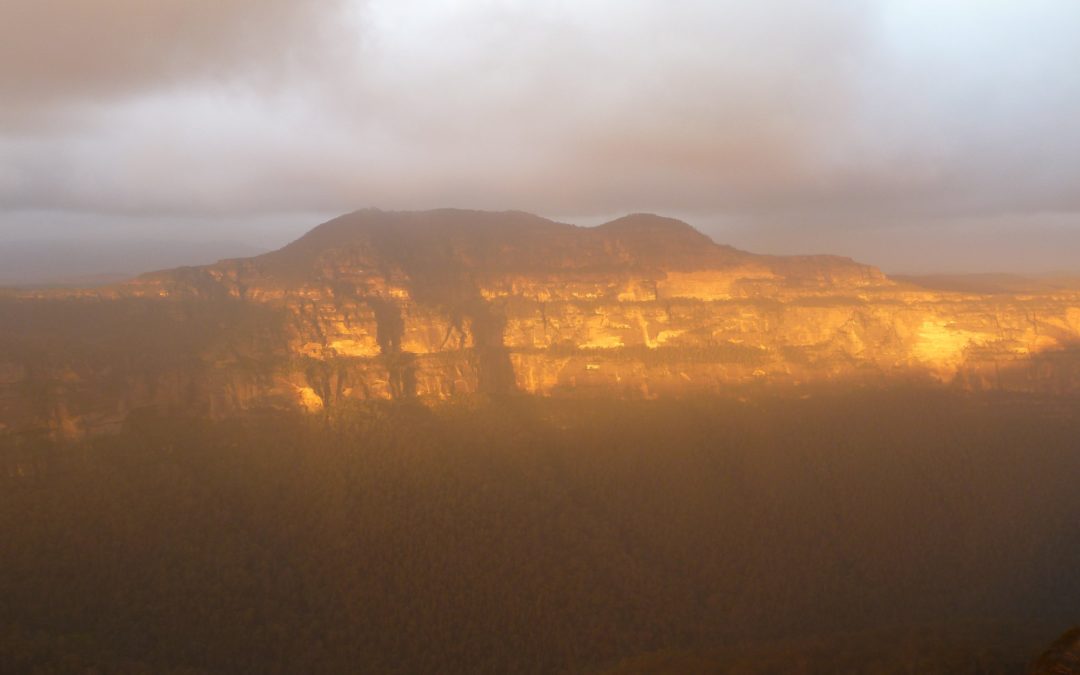 Following the rule of thumb that the epicness of a trip is inversely proportional to the rate of piking in the 24 hours preceding its start I was anticipating great things from this day out. By the time we met at the Mt Banks carpark on Saturday morning we were only 3 with some other club members feigning various illnesses (read hangovers) and injuries ranging from broken ankles to far worse to stay in Sydney.

Mt Banks, this trip took the lowest ledge to the steep ramp (on the right in this photo). Photo Dave Noble

Undeterred, we paused only briefly to giggle at T2’s ponytail and for a brief discussion of the beta I had been gleaned for the trip. This beta consisted of my minds recollections of an excited conversation I had had a week earlier at The Ledge climbing center, aided by google maps and a picture on flickr. What’s more, the info had been passed on second hand, from someone who had not himself been out there. Others also warned me that although the original source was the highly reputable Dave Roots, that I should keep in mind that “sandbagging was nothing new in the climbing world…”. (Dave Roots was an active member of the “second generation” of Bluies climbers who amongst many other classics of the 1960’s put the “original route” up Mt Banks —  still considered a formidable adventurous outing — with the aid of little more than a hemp rope.) 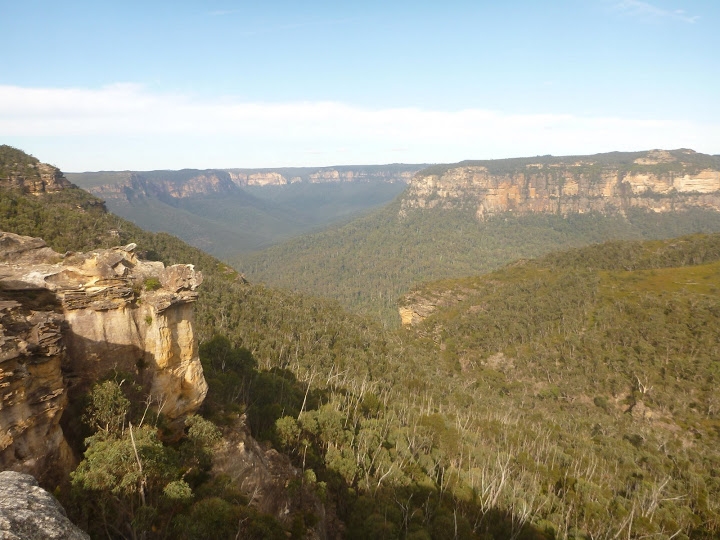 The Grose Valley as seen from the walking track.

The Grose, as seen from the ledge.

The scrub bash out to the cliff edge on the northern side of Mt Banks proved pleasant, although there were many kerfuffles working out what height we needed to be at to hit the lower ledge system that ran all the way across Mt Banks 100 meters from the Grose Valley floor.

Given the company, the conversation had already become highly animated, hilarious and obscene. 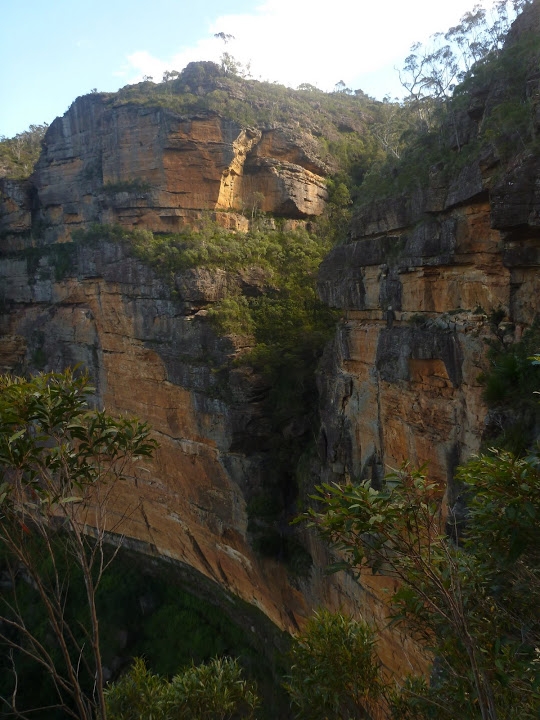 A small waterfall into the Grose. 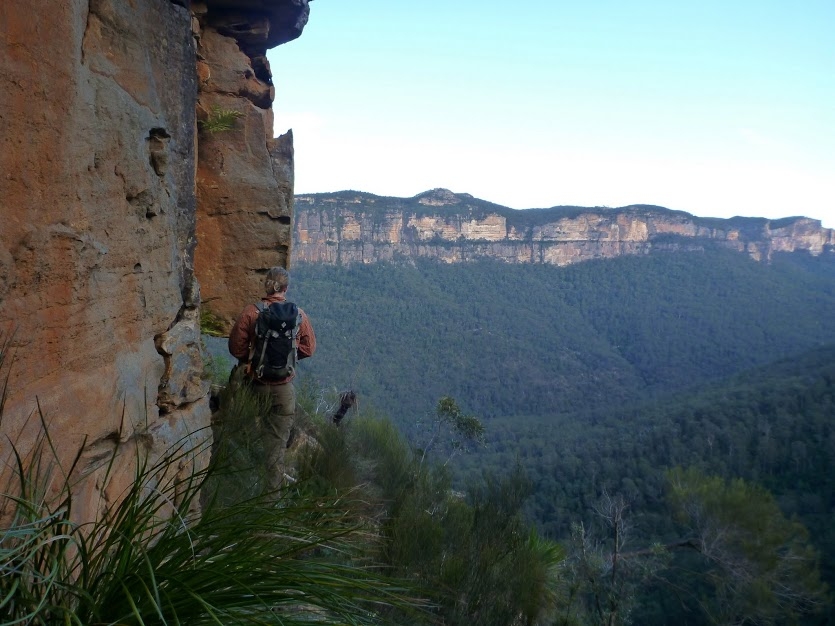 After not too much time we found our way onto the ledge, where we were immediately faced with a gut wrenching step over a corner in the cliff face that had thankfully had a rope fixed across as a handline (without which we would have probably been denied).

Whilst we waited for Tom to put on his rock shoes (as his street shoes with melted soles felt a little out of their depths on the exposed terrain) we wondered what climbers, who had obviously fixed the bolts and safety line, were doing out this way. And I was again inspired to go hunting for a copy of Warwick Williams’ classic guide to rock routes in the Grose Valley. 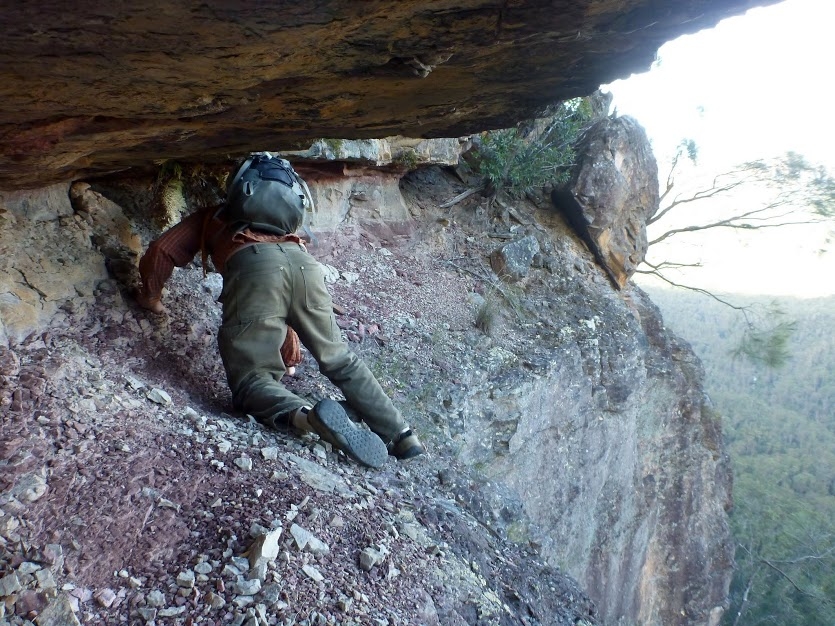 The following 100 meters were absolutely terrifying, being made up mostly of crawling along the ledge which was now less than 1 m high and wide and covered in a thick angled layer of shale scree.

It later became apparent that we had each thought of piking at this point but had stayed shush… good ol’ peer pressure! God it was appalling! 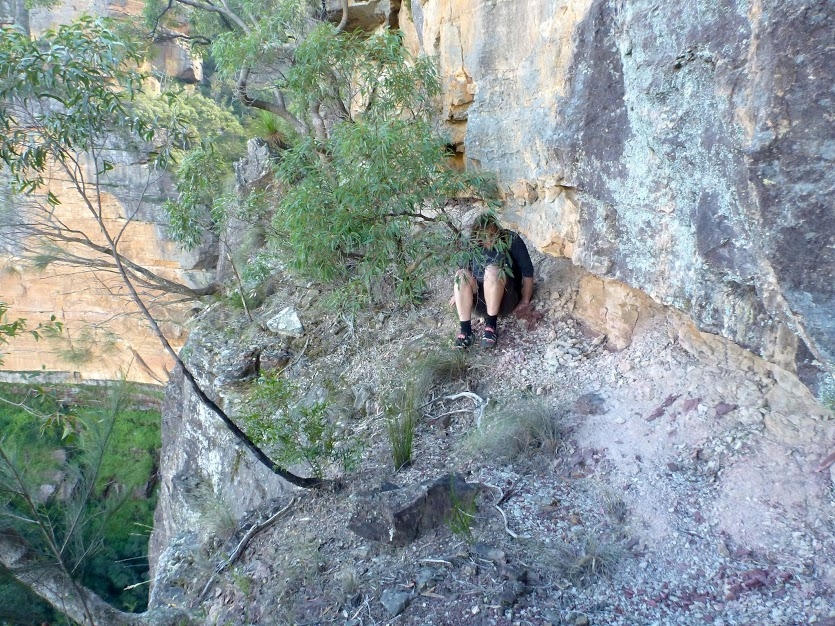 Thankfully this section turned out, for me at least, to be the crux (fear wise). (Edit: T2 has raised the contention that the exit climb is the fear crux. I guess it comes down to personal preference and confidence on technical terrain.)

Once the ledge opened up the going was easy, yet still interesting. 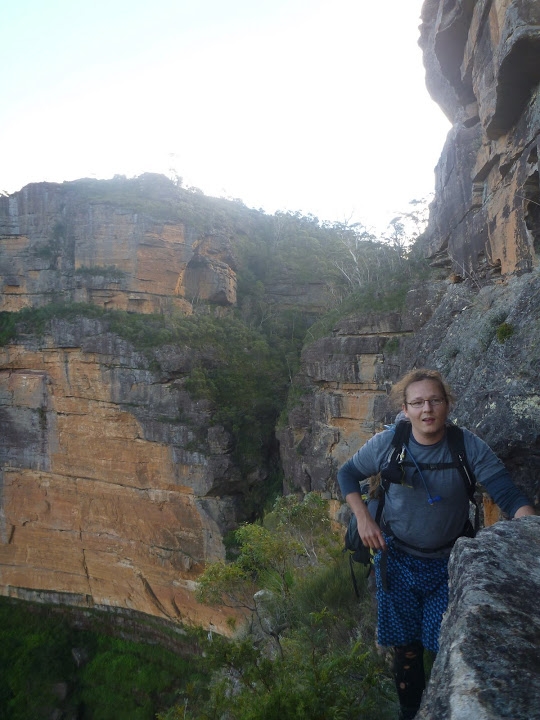 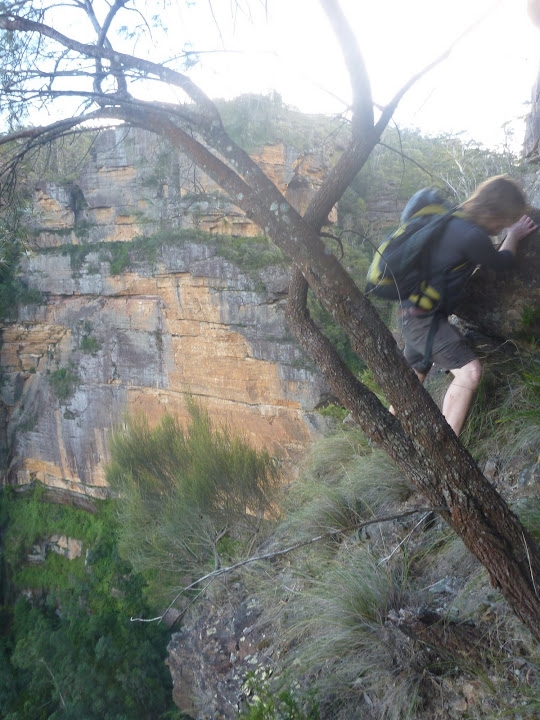 Tom on an exposed move

We crossed some swampy miniature gullies and by elevensies had stumbled upon the climbers bivy.

After only a short break we pressed on, driven by the constant uncertainties of whether / how the exit would ‘go’. 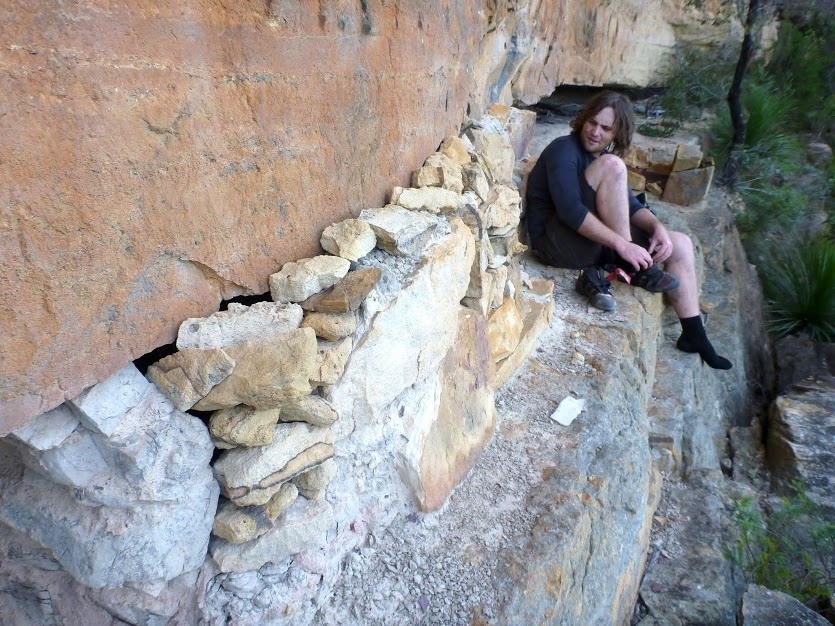 Wishing not to take from the adventures of future trips I won’t say much about the exit. The ramp is impossible to miss. “If you miss it, give the game away” (see Wade Stevens’ fantastic guide to the climbs of the Wolgan Valley). 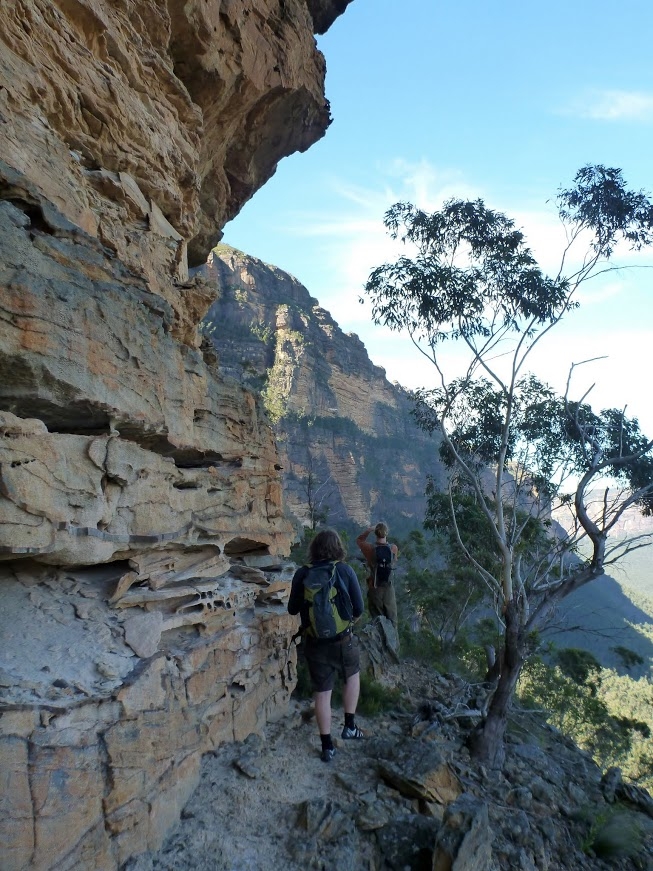 As is clear from the picture, the ramp doesn’t quite make it to the next ledge. The link-up here is what Dave Roots had called “a bushwalking boulder problem”…

Well, as much as I love this phrase, I would be lying if I didn’t admit that I lead this with my half rope and a few (average) gear placements.

The moves are easy enough, but the rock quality leaves something to be desired and the position is stunningly exposed — a few hundred meters above the Grose with only a small pillar directly below you. 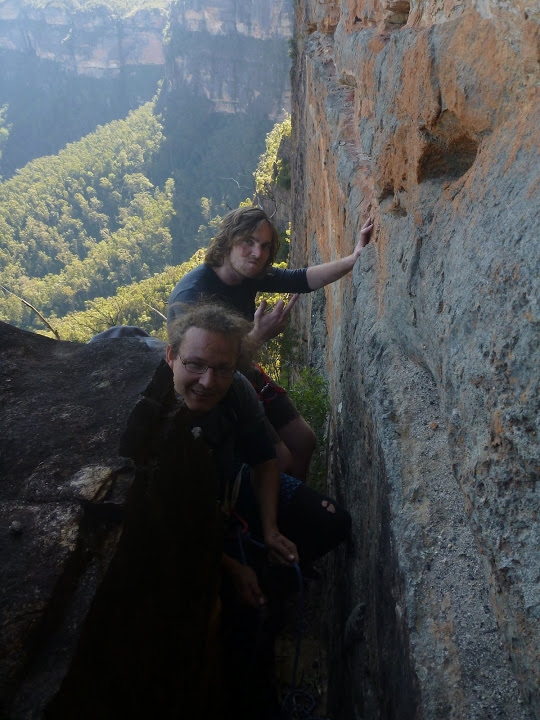 The narrow ramp climbed next to this sheer face

I would have liked to have underlined this point with a picture of Tom and Tim’s faces as they reached the ledge above, but I was too busy belaying attentively (more so than usually).

Let me just say that T2 didn’t spend a second longer on the face than absolutely necessary, sending Tom up first to clean the gear and then racing up at a pace that defiles the Fat Canyoners’ general approach to vertical metres. 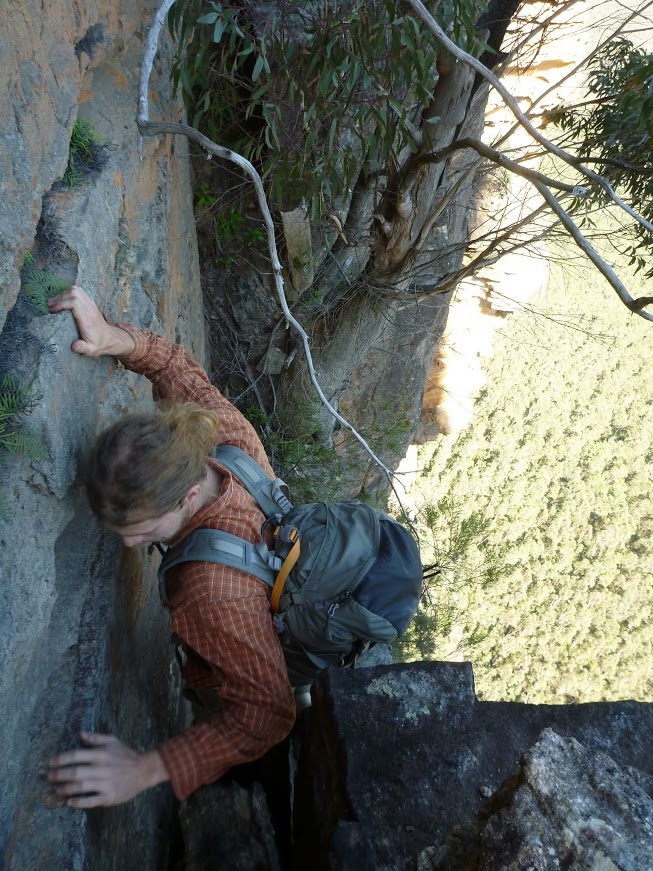 By early afternoon we were on the tops, bathing in the Autumn sun and the satisfaction of having completed another excellent trip that sits in the obscure niche of being too exposed and technically difficult for bushwalkers and requiring way too long a walk for climbers. That said the exit ramp is know to climbers, forming part of the Coronation Crack route.

Far removed from the edge of the abyss of the Grose Valley for the first time in many hours we relaxed and feasted our eyes on more of the stunning views (and our stomachs on Tom’s gourmet lunch). 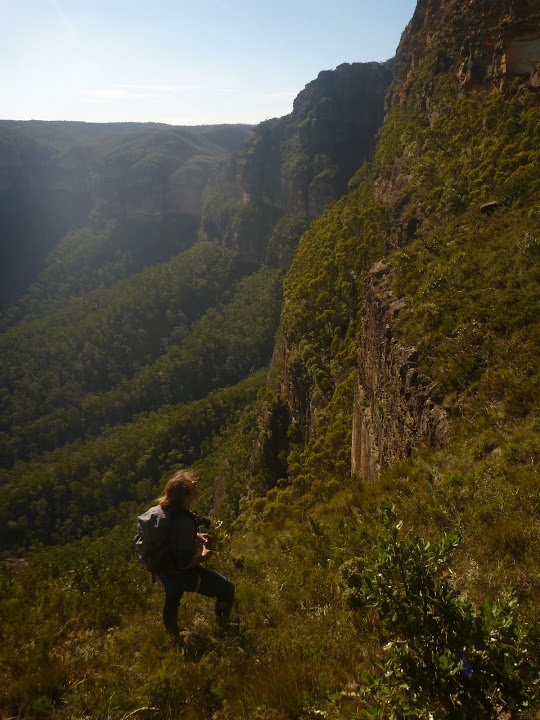 Safely at the top 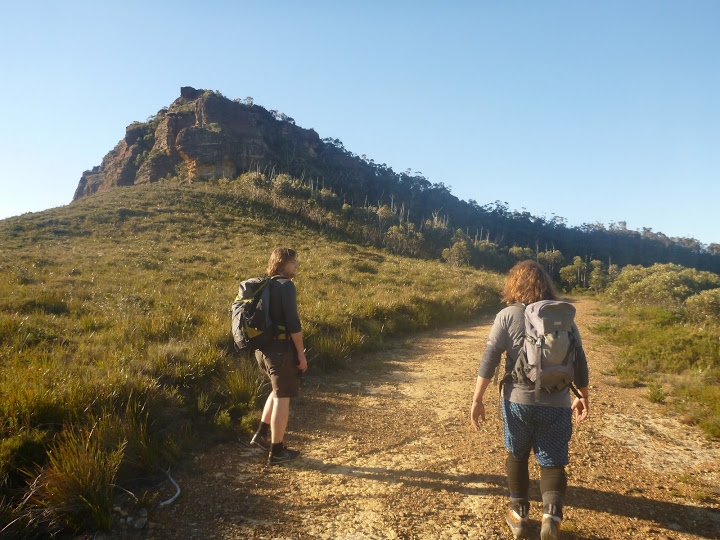 Setting off on the fire trail back to the cars

After a quick scoot back to the cars we watched the sun set in some peculiar atmospheric conditions from Perry’s lookdown.

Directly facing Mt Banks we were reminded of the true scale of its face towering over the Grose, where we had dared to tread. 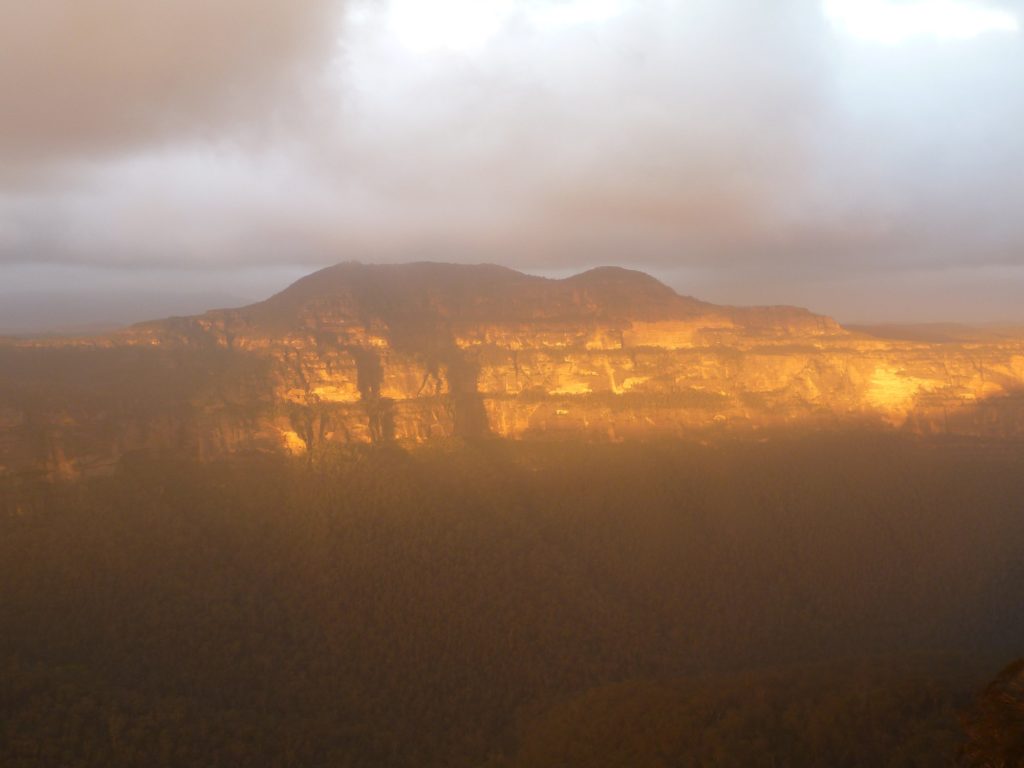 As has become tradition on trips with these two, the journey back to the city was broken up with a dinner stop at the lovely warm home of Tom’s mum Heather.

Sun sets over the Bluies.