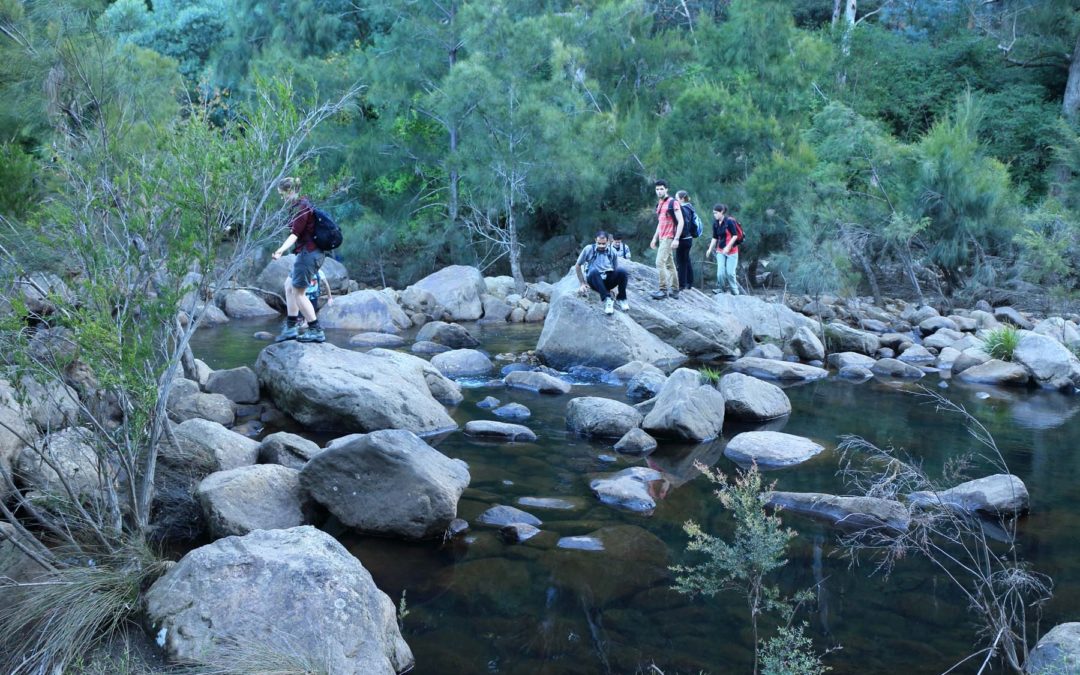 The weather was perfect for this day trip down Glenbrook Creek. After a long train ride from the big-smoke, 9 walkers alighted from a Blue Mountains train at Glenbrook station at 9:23, where we were meet by George and Kate.

After 1km or so of walking in the back streets of Glenbrook, we left the sealed road and found a track leading down to the rail corridor. We followed the train tracks for a few hundred metres and crossed over to climb a ridge on the other (south-west) side. From here we found the old road (completely over grown now and just a walking/MTBing track) heading west towards Glenbrook Creek. After a few switch backs and small down climb we reached Duck Hole. This was the first of many creek crossing we would complete today. Most people took their shoes off for this short crossing onto a large sandy beach where some people were camping. We regathered and started following Glenbrook Creek downstream. We found a walking track and our progress was good along the scrubby banks of the creek.

After a few kms and a few bends in the creek, we reached the start of Blue Pool. On the right hand bend in Blue Pool we encountered the first day trippers, enjoying the sandy banks of Glenbrook Creek. We crossed over to the east side of the creek and followed the well-formed track to the road. After 250m of road, we reached the causeway and continued along the east bank. It was almost 1PM and everyone was ready for a lunchtime stop. We continued along the creek looking for a nice shady spot for some lunch. We reached Jellybean Pool in no time and crossed over to find a nice spot on a sandy beach. There were quite a few day trippers about enjoyed the cool waters of the creek and the spectacular autumn weather. After some food and a snooze, we crossed over again and continued walking down Glenbrook Creek towards the impressive gorge section.

The next section of the creek is the most impressive, with huge towering cliffs dominating the scenery. We continued down the creek mainly following and the south bank and crossing over to the other bank when needed.  This section has many large flat rock platforms which made the going reasonably easy. These were separated by sections of scrub. We found a nice sandstone cave for an afternoon break and to enjoy the golden reflections on the water from the afternoon sun. Time was getting on and we were getting close to the end and the sun was setting fast. Soon we reached the end of Glenbrook Creek were it flows into the Nepean River. We crossed over to the north bank and then followed the west bank of the Nepean River towards Lapstone. We eventually found a good track and made good progress back to Lapstone. As we walked along the Nepean River the almost full moon rose from the east. It was about 5:20PM and the next train heading to Central was due to arrive at 5:26PM. We still had 500m of walking to go before we would reach the station. I’d thought that we wouldn’t get there in time, so we continued at a leisurely place. Just was we reached Lapstone Station, we saw the train which was running 5min late. Unfortunately we were on the other side of the tracks and had to climb the stairs to catch this train. But, before we had a chance to the reach the train, the doors closed and the train departed for Penrith.  The next train was in 25 minutes, so we didn’t have to wait too long. We farewelled George and Kate who were heading back to Glenbrook station.

A fantastic walk through a magnificent section of Glenbrook Creek. We had perfect sunny weather and completed the walk just on sunset. Thanks to everyone who came along.

My photos can be found here.