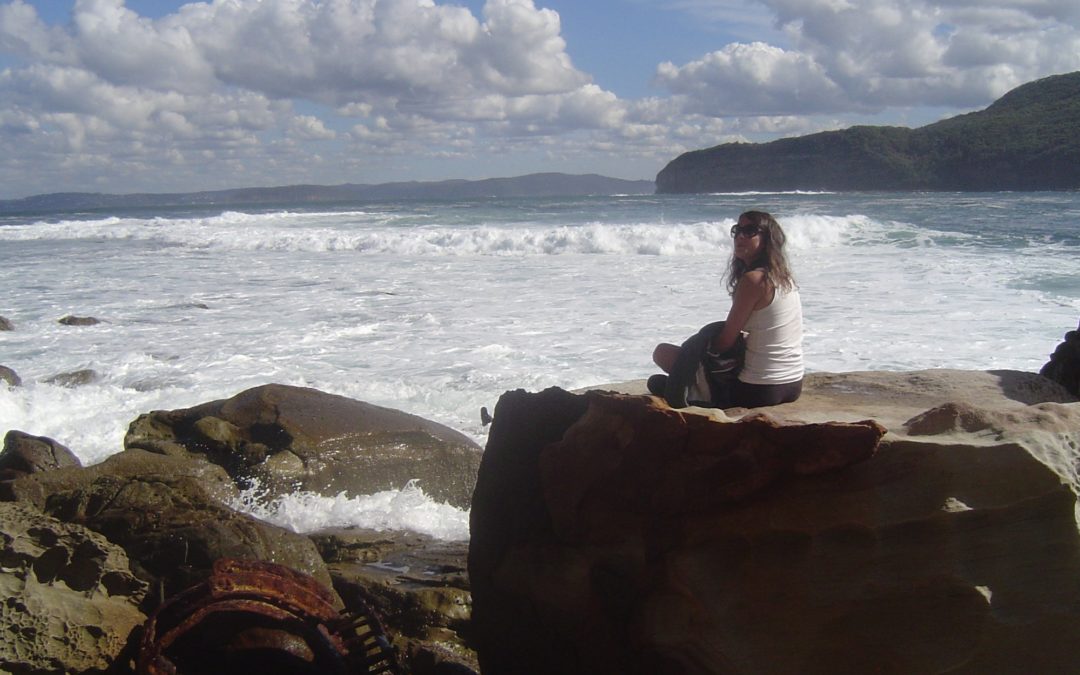 It seemed a miracle after the heavy rain of the day before the walk, that it should turn out to be a bright sunny day, but that’s how it was.

With a Cityrail foul-up on the Eastern Suburbs Line meaning 3 people couldn’t get to the walk, one more who got caught up in slow buses, and, well, a couple of simply no-shows, the remaining eight of us met together at Woy Woy Station. The it was off to Macmaster’s Beach (the suburb that is, not the actual beach), and Leah and I did a car shuffle to leave one at the other end at Kilcare Beach. Meanwhile the remaining six were sent on a short “self-directed” walk along a dead-end track to one of the headlands of Cape Three Points, so named by captain Cook in 1770, where there are views north over Copacabana Beach.

By the time Leah and I had returned, the six had come back to the start and we all proceeded to the first beach, Little beach. The normally dry track was, after the heavy rain, quite muddy and waterlogged in many parts along the whole way to Kilcare; in addition there were fast flowing streams where there is normally just a trickle. Thus two unexpected “creek” crossings were encountered.

After Little Beach, then it was off along the Coastal Track to Maitland Bay, passing Caves Bay, where unfortunately no less than 3 walkers were bitten by a Bull Ant, requiring a stop for First Aid. (Still, we didn’t see at any stage those other two residents, leeches and snakes). We observed the Bombora off Maitland Bay, where the steamer S.S. Maitland was wrecked in 1899, giving the Bay its name. Then down to Maitland Bay Beach where we had lunch. After lunch three intrepid people went swimming while the rest of us went for a walk along the rocks at the Eastern end of the beach. We observed the unusual rock formations, and also the last bits of the SS Maitland wreck, being the boiler jacket. The seas crashed onto the rocks around us. (Normally Maitland Bay is placid, but on this day of heavy seas there were some decent breakers at the beach. Be aware though that this beach has no lifeguards). While we were all away from our packs, a raven discovered the chocolate Swiss Roll in mine, and made a determined effort to steal it. Not only that, it found the tinned herrings in my bag and had stripped the outer wrapper from it before Andrez intervened and shooed it away. After lunch we crossed the “creek” leading from the lagoon there – caused by the heavy rain – noting its tea-coloured water (comes from the tannin from plant matter falling in it). We then proceeded up the track to the car park, turning left to go along the Bullimah track to Kilcare Beach. For long sections the track was very waterlogged, and a paddle in many places was unavoidable. Eventually we reached the shore near Bullimah Beach and noted the heavy seas breaking onto the rocks. Then we reached Putty beach, with another instant “creek” crossing. From there it was the 1.5km walk along the beach to kilcare, where we found that the surf club’s café had only just closed.

So we then did the car shuffle again, and drove back to Woy Woy Station, with just minutes to spare before the next train back to Sydney – very lucky timing.

it was a great day enjoyed by all, especially the sunny weather which was not too hot (“just like a normal summer’s day in Europe”, Ja?).