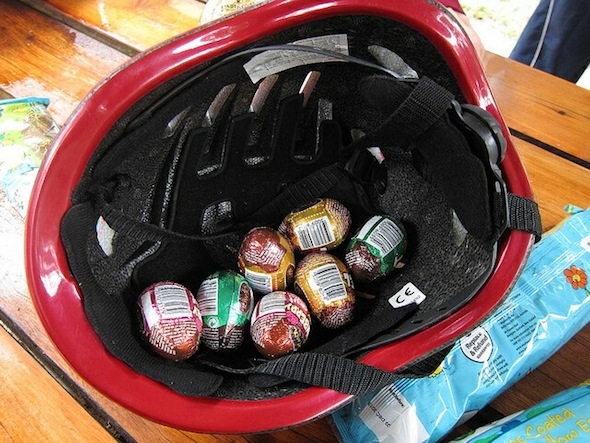 Following the huge success of last year’s SUBW New Members Welcome I thought I’d organize another one at Girrahween Park (part of Wolli Creek Regional Park). The aim of this trip was to provide an opportunity for the new members of the club to meet other newbies as well as learning more about the club and bushwalking in general from more experienced walkers. To sweeten the experience, I combined it with an Easter egg hunt and a short easy day walk.

With a week to go, this trip was full with 30 members signing up, however the rain turned many people away. This trip probably holds the record for the biggest pike ever! A few days before the trip about five people contacted me with various reasons why they couldn’t make it anymore, but on the day we only had eight people turn up (including myself)!

That morning (as with every trip that lands on a rainy morning) I received a flood of calls, texts and emails asking me if the trip was still on. I confirmed with everyone that the trip would still be on the day before, so I wasn’t going to change the plan now. Despite the rain, we would press on regardless.

Easter eggs made for some tasty trivia prizes

The forecast predicted rain in the morning that may clear in the afternoon, so I made some adjustments to the trip. Initially, an Easter egg hunt was planned, but it’s never a good idea to leave chocolate out in the rain, so I changed that to Easter Egg Trivia.

The participants really enjoyed this game and they especially liked the fact that they could win chocolate for answering a variety of questions related to SUBW, bushwalking and canyoning. Especially because I let them use their smart phones to look for the answer on the SUBW and Fat Canyoners websites.

I had initially brought several kilograms of chocolates (as I was expecting 30 people), but with only six new members playing the trivia, each person was extremely happy to take home at least 15 medium sized Easter eggs. 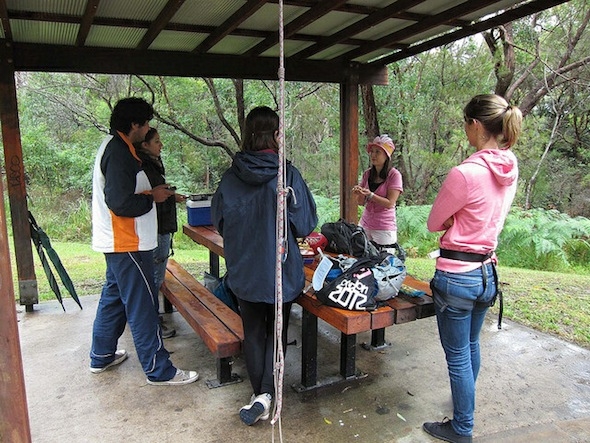 Going through bushwalking and canyoning gear for the new SUBW members

After the trivia game the rain was still coming on and off, so I held more activities under the shelter. There were many members interested in learning more about bushwalking and camping gear. I brought all my overnight camping gear and did a demo on packing equipment for a weekend trip.

We covered many topics, such as the difference between travel packs and hiking packs and the pros and cons of a down sleeping bag verses a synthetic sleeping bag.

After going through camping gear, I went through abseiling and canyoning gear. The new members also had a go at prusiking up a rope attached to the picnic shelter. 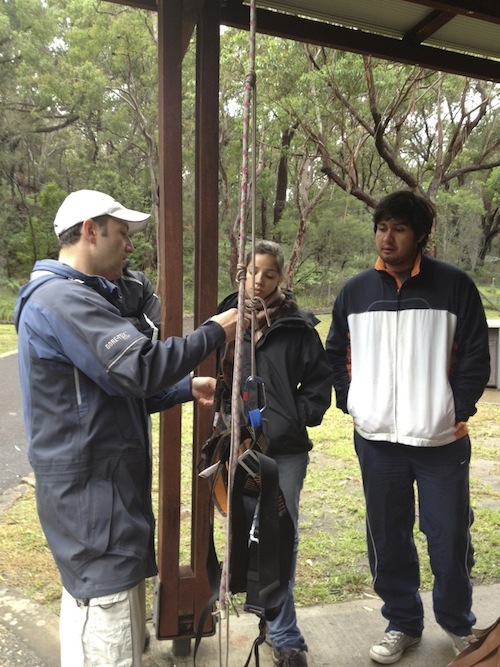 When we finished these activities, it was still raining outside the shelter. The last activity planned for the day was the short easy walk, but with the cold wet weather, there weren’t many takers.

This left Albert and myself for the walk. Ironically, about 15 minutes after everyone had left the rain totally cleared, revealing a beautiful bright blue sky.

Overall, it was an entertaining day. It was also great to see some new faces of the club getting involved in a relaxed weekend social event.