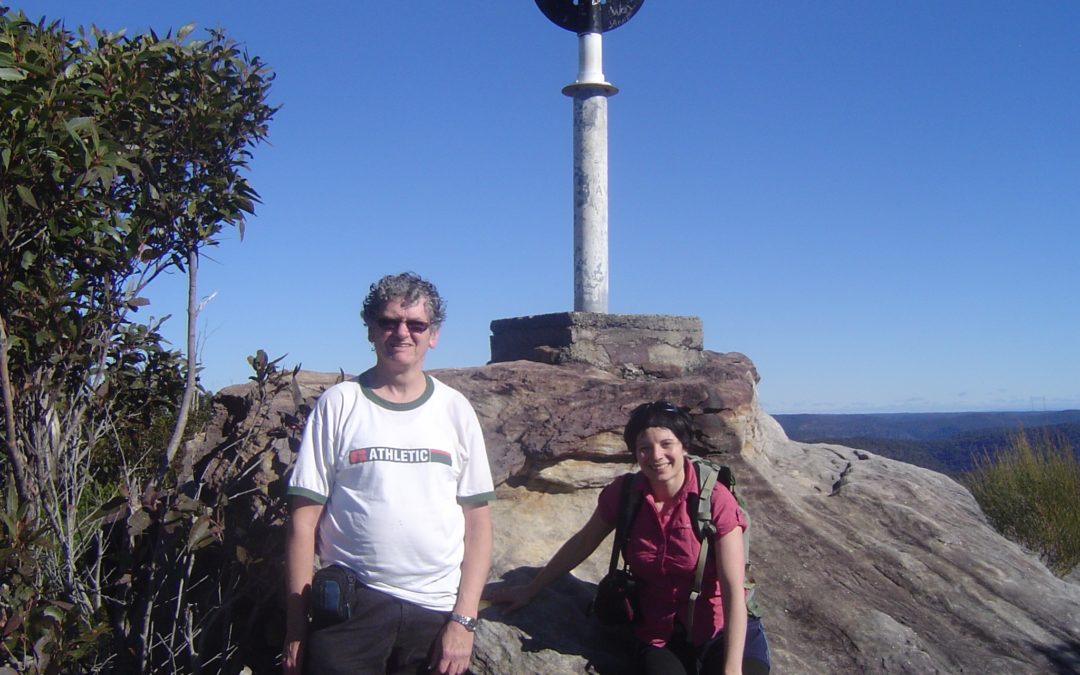 After meeting most people at Central Station we caught the train up to Wentworth Falls, picking up Trang at Parramatta and Charu was waiting at the Station. We noticed the clear blue sky from about Emu Plains to Linden, but after that the fabled “mountain clouds” came along, but it looked like we would get away without having any rain. At the Wentworth Falls shops there was a short loo break and an opportunity to buy extra fuel for the walk; Trang got a banana and Marko got his supply of that essential bushwalkign fluid – water (bet you thought I was going to say beer). Then it was off to Falls Park where the Darwin’s Walk starts.

This walk follows Jamison Creek from the Highway to the top of Wentworth Falls, with Queen’s Cascades on the way. It passes through a lightly wooded dale, which is undergoing bush regeneration. On the way we spotted a large Yabbie (crayfish) in the creek. After a short photostop at Queen’s Cascades we continued to the top of Wentworth Falls where there were lots of tourists enjoying the views which encompass the Kings Tableland and Jamison Valley. From there it was down the fairly steep Pass to the bottom of the first drop of Wentworth Falls where there were more tourists including a guided tour (wonder how much they paid?). After more photos we set out for a short distance along the National Pass until we came to the track junction leading down to Wentworth Pass. Although it was not originally planned to go that way, we opted for the “fun” section of going down the steep ladders which are “Slacks Stairs”. There are actually seven of these steel ladders, three in cages and 4 uncaged. And they are quite steep – close to vertical. From there we walked to the bottom of the last drop of Wentworth Falls where we had a photostop, and Marko  took a break to check emails and tweet (I can see this becoming a common activity by many on bushwalks in the future!). Then we followed Wentworth Pass, crossing Dan Danella Creek, until we reached the Valley of The Waters Creek, which is crossed on little rickety metal bridges (one so rickedly it has fallen apart). At this point Wentworth Pass meets the Vera Falls Track which originates at the Conservation Hut way above on the Plateau. We turned left to head along to Vera Falls, the track becoming slightly more vague and steep. Charu had a couiple of slips and decided to stop for a rest just near the crossing of the creek. Given that we didn’t want to get too far from Charu, and also sensing that for a coiuple of people the track firther on would be tricky, I decided to end the walk along the track at the Creek crossing and have lunch there. It proved to be a fortuitous location, as in the large pool there, we spotted several quite large Yabbies (and a small one) and some fish. (The pool there would be OK for a swim on a hot day although Vera Falls pool is better). After lunch we headed back towards the Conservation Track up the steep climb to the Plateau above. Onn the way we heard thunder gradually getting closer, and it was not helpful that for several sections we had to go along steel steps. At last after much puffing we reachedvthe top just as the rain had started and fortunately the full storm hit just as we got inside the Conservation Hut. There we had refreshments (coffe and ice cream) before setting off down Fletcher Street and Falls Road for a road bash to the Station, which took about 25 minutes. There we said farewell to Charu and the rest got on the 4.05pm train back to Sydney. At Emu Plains we saw and photographed a double rainbow.

It was an enjoyable day for all and gave a couple of people a tryout on some of our “medium” walks.