Nude yoga on the banks of the Colo 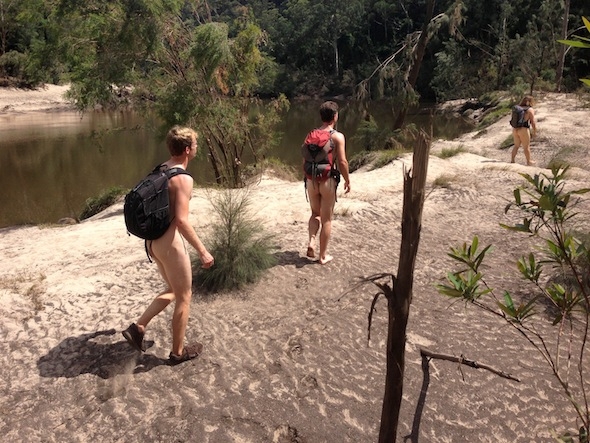 With the sun baking down on our naked flesh, it was almost too hot, despite the dappled shade. So much for the ominous weather forecasts that has promised light showers and plenty of clouds.

The sky was almost completely blue, the air still, and the autumn sun unseasonably warm as our yoga session progressed.

We were sprawled, all eight of us, in a rough circle on the flat sandy bank of the Colo River.

May slowly worked her way through the session — with her soothing, relaxing voice balancing out my screaming muscles as they complained about being forced to stretch in ways they’d never tried before. It was only my second yoga session, and my body could feel it, but the surroundings made it perfect. 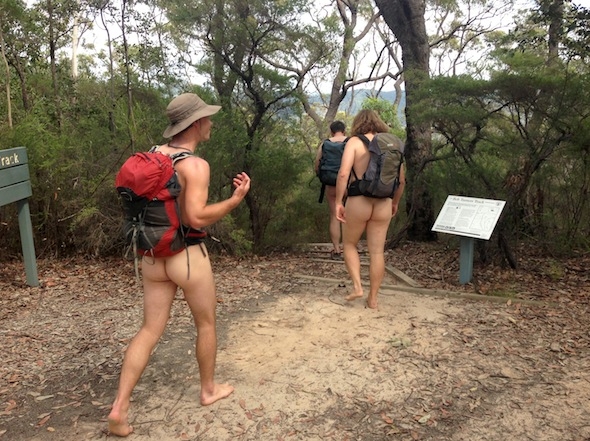 Setting off from Colo Heights down Bob Turners Track

My first yoga session, also on a nude bushwalk, had been a far chillier affair. We’d even started a small fire that time to warm ourselves back up after a chilly swim. But this time conditions were ideal.

We’d met up at a reasonable hour, combining from far and wide. Jeremy was over from Adelaide, May was briefly back from New Zealand, and Joshua had driven all the way from Orange. With that kind of sprawl some slight delays were inevitable, and so it was that late trains and roadworks pushed back our start time a little.

We piled into a couple cars and drove north from Windsor to Colo Heights. Our planned walk, down Bob Turners Track, is about seven kilometre return on a signposted track. Despite being such an easy, accessible track, I figured that being a Monday we’d have the place to ourselves. Unfortunately, as we reached the end of the dirt road we found several cars already at the track head.

We piled out, and undeterred by the cars most of us stripped off. This was planned as a nude bushwalk after all! 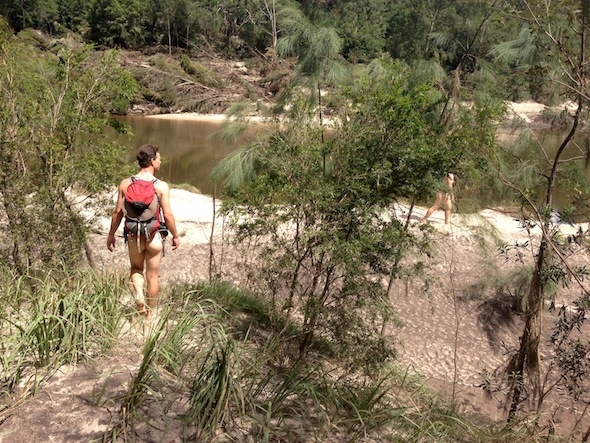 Reaching the sandy banks of the Colo River

Mike took his shoes off too, which inspired me. They’re always the one thing I keep on, but I figured why not.

Into our packs went our clothes — just in case the cars belonged to a group that was unimpressed with our state of dress. Into my pack also went some shoes — just in case my feet decided they didn’t like being so directly in touch with nature.

Then off we went. The surface felt wonderful between my toes. High up there was plenty of leaf litter, and in places it was nice and sandy. There were grippy sandstone slabs, and some more challenging patches of sharper pebbles, but overall it felt wonderful. Our track was well maintained, with only light brushes from the surrounding plants, and nothing too spiky.

About a third of the way along, as we were deep in conversation, we suddenly heard voices coming from below. Looking around a bend in the track we saw an older couple coming towards us. She couldn’t hide her smirk when she saw us. He was more forthright, dryly stating “I wouldn’t be showing off my dick if it was that small” before continuing on his way. At least that explained one of the cars!

There were some obvious signs of the recent flooding

The rest of the walk was uneventful, and soon we were down by the river. Recent massive floods had scoured the banks, with debris almost 10 metres above the river level and trees snapped in half. As we walked along the bank looking for a good spot to plonk down we even found two canoes, or possibly two halves of the one canoe, wedged into large piles of broken trees and sticks.

Thanks to the warm still air, and the streaming sunshine, we were all nicely warmed up, so it didn’t take long for everyone to dive into the deep, wide stretch of river.

The water flow was flowing quite reasonably, with several of us racing down some small rapids while the others sunbaked on the sand.

After a while we suddenly saw four fancy packrafts come floating into view. I gave them a wave, then noticed a woman on one of them was staring at me. Then, with a questioning voice, she called out. “Tim?” 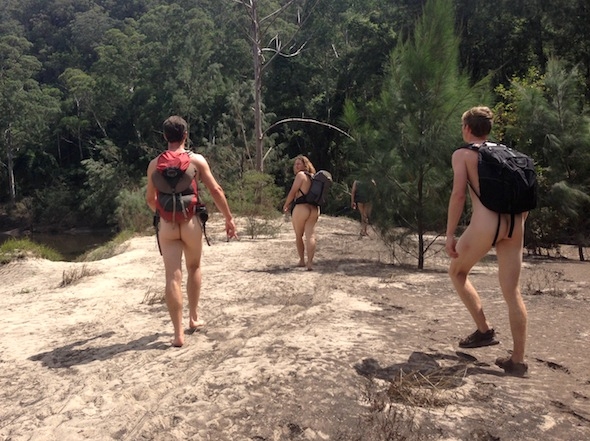 Sure enough, despite being in the middle of nowhere, I’d managed to run into someone I knew. Her group were just finishing up a three day paddle down a beautiful stretch of the river, and were responsible for the remaining cars we’d seen up top.

After a bit of a catchup, and a play about in the raft (apparently it was the first time it had been used nude), we all ended up back on the riverbank for lunch.

We said our goodbyes and then it was time for the yoga. As someone who has absolutely no interest in healthy living, it was strange that I’d been looking forward to this part so much. Down went the towels, and the session began. 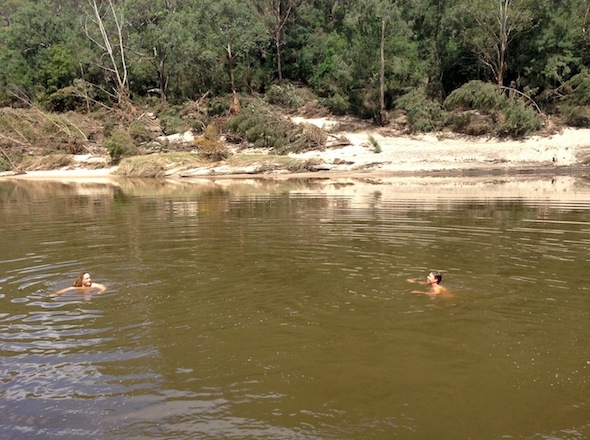 I don’t have any empirical evidence for this, but I can’t help but think that being unencumbered by clothing, by being in a completely open and exposed position with others, and by having your skin in direct contact with nature, the whole experience is that much more amazing.

At the end, with us all feeling completely relaxed, May offered to run a healing circle. Laying in the middle of that circle, surrounded by gentle, hypnotic chanting, it was easy to start believing that there is indeed some primitive resonance linking us all together, man and nature.

At the end it was time for the girls to leave, so Leah could make it to uni on time, but the rest of us decided to stay put and enjoy a little more swimming.

After another float down the rapids we found a wonderful sandstone boulder, towering over the water. It was a perfect spot for some climbing, with our bare feet really connecting with the rock. 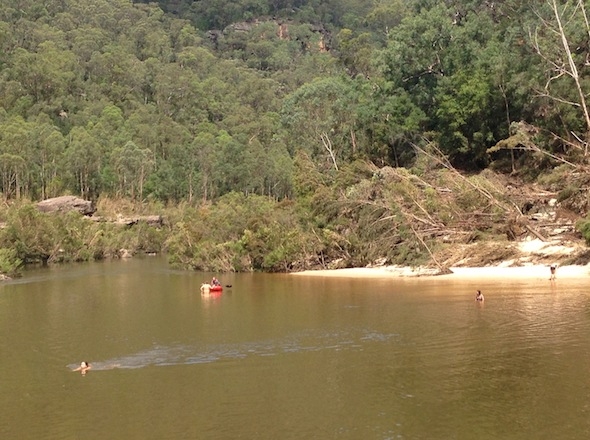 What are the odds of running into someone you know?

There seemed to be dozens of bouldering problems to solve, with easy stuff for me, and some quite challenging bits to keep an actual climber like Mike entertained.

Eventually it was time for us all to set off.

The walk out was almost as pleasant as the walk in, although it did feel a little more humid ( perhaps I was just sweating more going uphill).

Back at the cars it was time to get dressed and head home. We bid Joshua farewell, as he had a long drive ahead of him, while the rest of us popped back into Windsor for a nice pub dinner. A perfect end to the perfect day.