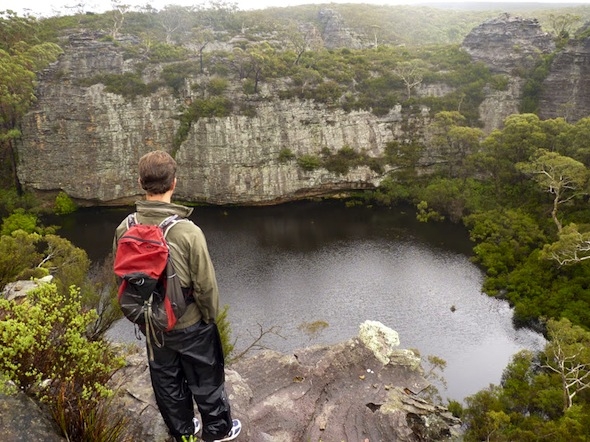 Last Saturday was one of those days you wouldn’t get out of bed unless it was to lay on the couch with a warm blanket, a hot chocolate and a good book. It had been raining for the previous two days, with temperature dropping well below the 20’s, and the weather forecast was promising more of the same.

Given the rather unappealing weather situation, I was expecting some massive piking action for this farewell walk. Surprisingly, only two dropped out. So 71 emails and 12 text later (I kid you not), eight brave — or just mad — SUBWers met up at Bell station just after lunch on what seemed like a perfect winter day: misty, cold and wet. Really wet. 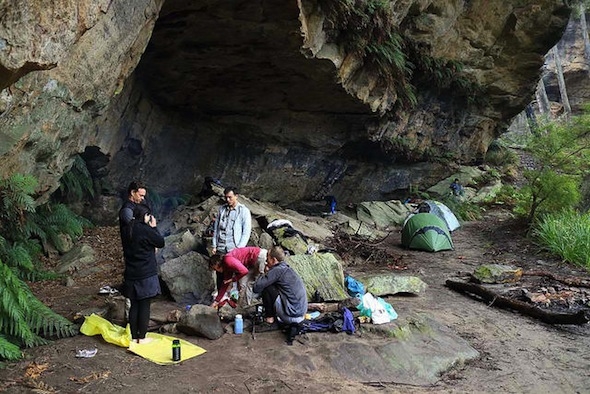 The plan for this walk changed about a million times. Originally it was to be a short and easy walk to Wollangambe Crater to allow plenty of time for a serious bush-bludge, followed by a canyon on the Sunday. Then it took the shape of a liloing trip. Eventually it just became a short bushwalk with a change of location as well! Talk about flexibility.

Our main concern was, of course, the level of water in the Wollangambe: too high and any wet option would have been potentially dangerous. Looking back, I’m so glad we didn’t go for any of those!

So here we were, nice and soaked and ready to set off to Goochs Crater and the dry shelter of its nearby cave. We took turns navigating the easy way along the ridge, stopping here and there to admire the rugged country before us. Even in misty weather this area is spectacular. 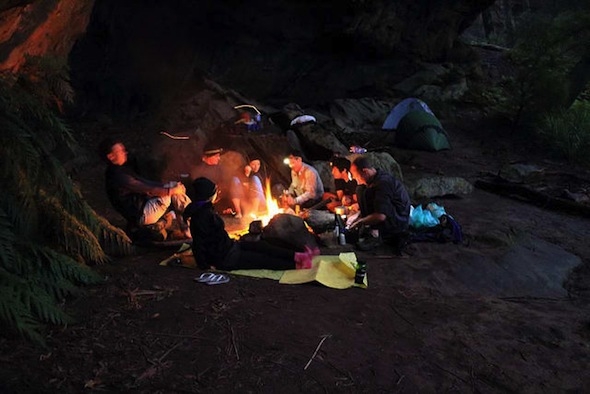 Drying off around the camp fire (photo Albert Chetcuti)

After negotiating a river crossing and a little pass through the cliff line, we got to the cave where we met up with Ashley, who had come in via the super short way. We quickly got the fire going and put dry clothes on. Ahhh, now we can relax!

As you would expect from a bludge trip, all sort of goodies — dips, cheese and generally yummy stuff — popped out of the packs as we sat around the warmth of the campfire. Did I forget to mention the booze?!?!? Of course there was plenty of it: wine, port, apple schnapps, absinthe, and even a mysterious Indian thing that Ulla brought back from her recent trip. I will only tell you that a few drops of that stuff took some nail polish off my nails! Unfortunately we only found that out when the bottle was almost empty. Well, we are all still alive. 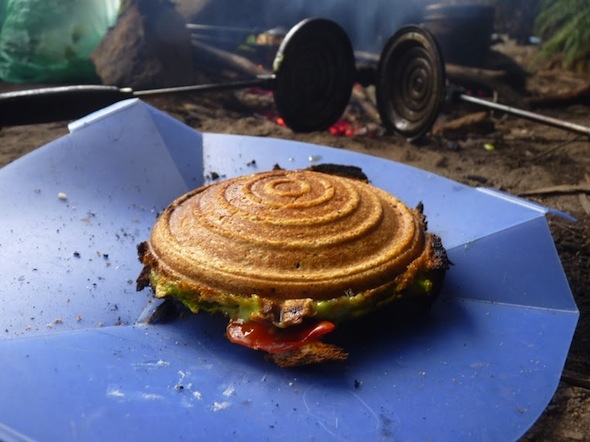 The topic of the night was finding a way for me to stay in Australia. Chee gently volunteered to marry me, but after not even 10 minutes of being married we were already arguing over the campfire cake baking system, so we figured it wasn’t going to work. Effort greatly appreciated anyway!

As the night went on more talking, laughing and food and drink sharing kept us busy — in the best tradition of a SUBW trip. We eventually snuggled into our sleeping bags and fell asleep with the sound of the rain falling quietly outside the cave.

The following morning was the feast of jaffles, with Ashley having three perfectly cooked ones in preparation for his last training session before the Six Foot Track Marathon next weekend (good luck!!).

Interestingly, some of us could barely walk and so stayed back at the cave to look after the fire (a little hungover?!) whereas the rest of the party walked up to the top to have a look at the crater. We simply could not believe our eyes: Ladies and gentlemen, welcome to Goochs Lake! It was completely flooded!!!

It doesn’t happen every day that you get to see Goochs Crater in flood (apparently the last time was in the early 80s), so in the end our change of location turned out to be a really good move! 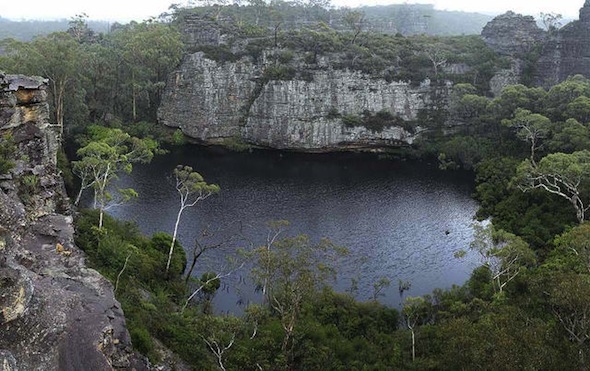 As you can imagine, we could not resist, we had to have a swim! Whilst most of us only dipped in for a few seconds, Andres floated in the icy water for nearly half an hour!

We then explored a nearby canyon — just from above though — as the waterfall was pumping way too much water for a hand over hand descent into it.

Back at the cave the fire was awaiting us and more tea and jaffles were had. 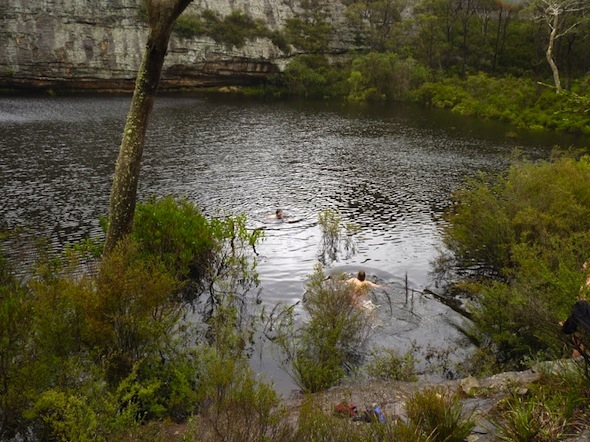 It was then time to get back into the rain and start the walk out. We easily back-tracked our steps and in no time we were at the ‘Gambe crossing point. As soon as we saw the rushing waters we all had the same thought: it would have been mad to lilo it today!

A short climb took us to the top of the ridge for the last nice stretch of the walk. There is something special about bushwalking in the rain and, as weird as it may sound, I really like it. The rain makes the colours stand out so much with all their different shades of greens and browns, the smell is a lot stronger, the wet leaves on the skin awaken a deeper sense of connection to the surrounding, the whole bush seems more alive. 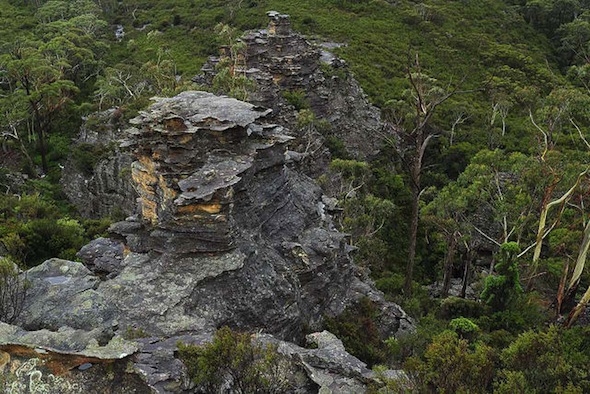 We made good time back to the cars so we decided to stop for a beer and a feed at the pub in Mt Victoria. Sure enough, as we left the pub the sky started to clear up — a little too late Huey!

A big thank you to these brave guys for coming along despite the miserable weather, I really appreciated it. And a super huge thank you to all the beautiful SUBW people that took me bushwalking and canyoning with them for the last 6 years — getting to know and deeply enjoy the Australian bush is the best gift I could have received. So thank you, thank you, thank you!

Well, it looks like it’s really time for me to head back home, but hey, don’t worry folks, I’ll be back… one day. In the meantime I will run some trips in the beautiful Italian Dolomites, anyone want to join?! 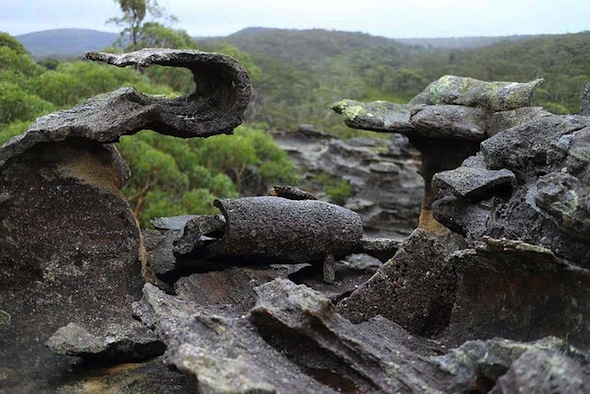 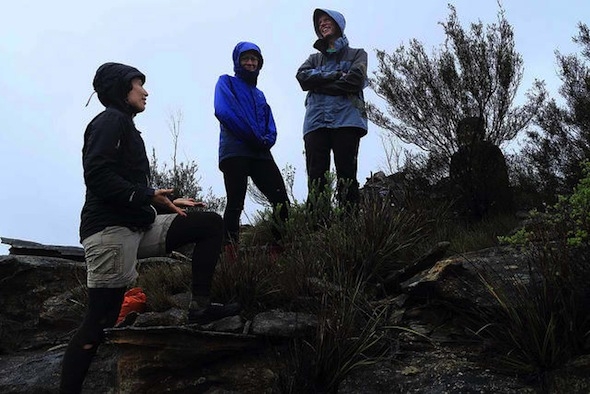 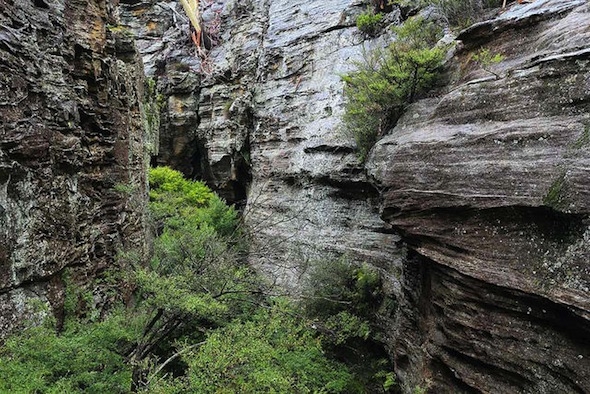 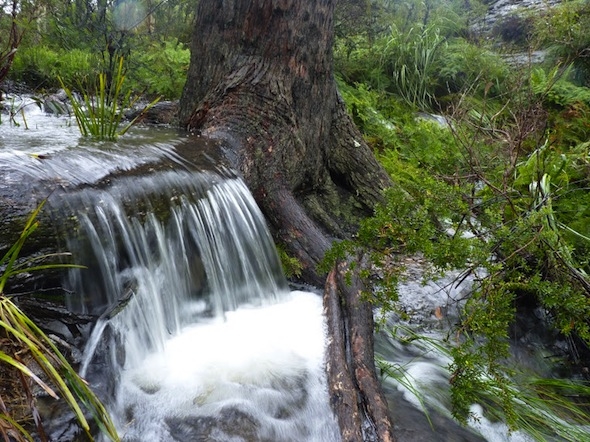 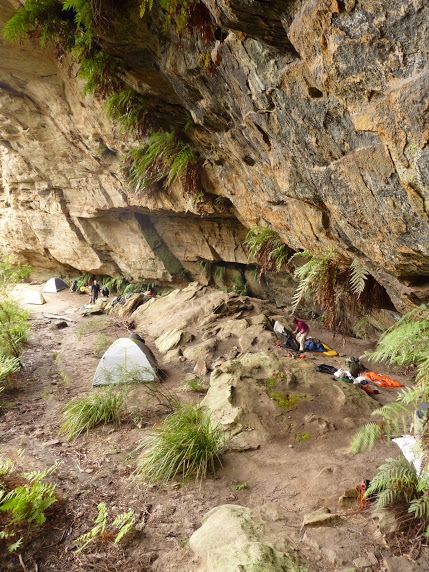 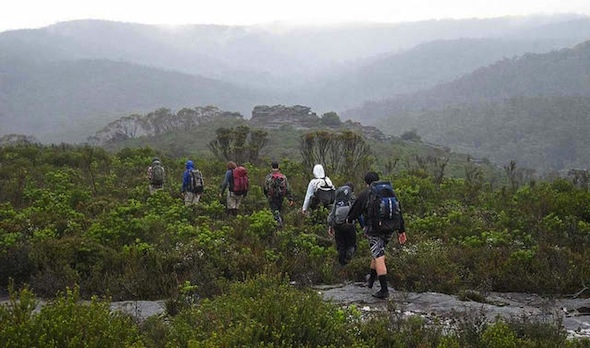 Walking out in the rain (photo Albert Chetcuti)