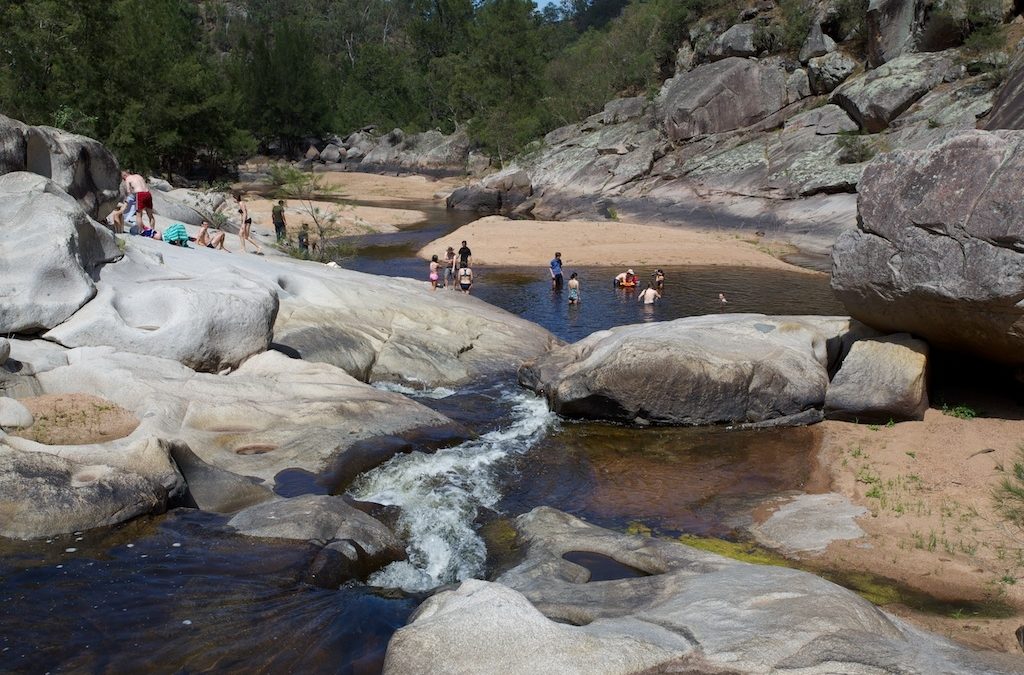 It was a late start – and I was the last to arrive (blaming CityRail) – at the Neates Glen car park near Blackheath on Saturday morning (well, almost afternoon actually). About 15 canyoners were waiting expectantly. It was a perfect day for a beginner’s canyon, very warm and slightly overcast. As soon as everyone was ready we headed down the path into the damp coolness of tree ferns and wet sandstone slabs. Many in the group hadn’t abseiled before so we setup a practise abseil in the gorge before the canyon proper. Peggy ran through the ABC (and DEF, and maybe she got as far as G) of abseiling so that everyone was in no doubt about what abseiling was all about, I did a demo, and then all the beginners took turns walking backwards off a cliff. It was all pretty straightforward (well, backward and in mid-air actually).

So everyone was ready for the canyon proper and wetsuits and  helmets were on so we walked a bit further to the start of the canyon proper and here we all abseiled about 10m down into the world of deep dark walls and rushing water. The soft hazy lighting was perfect and the canyon was beautiful lush and cool. The water was freezing cold and despite the wetsuits, many people went to great lengths to avoid having to swim. A bit further downstream we met up with Dave Noble’s group who had come up the canyon from the bottom, and they had with them young Jasper, a 6 month old baby – perhaps the youngest person ever to do Grand Canyon? Then there was a compulsory 10m swim which everyone had to do (except Jasper who had the luxury of a lilo). And then a little further downstream we rejoined the Grand Canyon track which led easily back up to the cars. So it was a very pleasant little trip down Grand Canyon as a prelude to our Christmas Dinner Walk.

Unfortunately we were running later than I had anticipated and Adrien had been patiently waiting for us at Blackheath station for about an hour and had left 6 messages on my phone. So we went and picked him up along with one other, and then the convoy of cars headed down to Megalong Valley and the Six Foot Track car park. From here it was an easy 1 hour walk to our campsite on the Coxs River.

It was now that finally the serious matter of bludging by the river began in earnest. Here was a grassy campsite, rapids through a little granite gorge, a natural swimming hole, sandy beach, and smooth granite slabs for lazing around. What better place to be on a hot summer’s evening. We sat around on the granite slabs, went for swims, photo faffed, cooked jaffles, setup tents, ate, drank, talked and did – well – not very much at all. Some more people arrived just before dark and we all sat around the fire long into the evening. Midnight came and went, the National Anthem and the Wild West Show were sung in an uncharacteristically lacklustre manner, but everyone by then was replete with wine, smoked cheese and single malt, so weren’t up to much at all anyway really.

The next day began much as the previous one had ended, with people lazing around the campfire eating and sipping tea, and the occasional migration to the river to cool off. By midday most people had at least begun the process of packing up and walking out and by mid-afternoon this special little spot by the Coxs River was left by itself once more. It will be there next year, like it has always been, maybe changed slightly, the sands shifted, the water up or down, the grass tall or short, the bullants here or there,  but this little spot will always be there, as the place where SUBW goes every year, just before Christmas, to bludge and socialize on a summer afternoon enjoying everyone’s company at the end of another year.