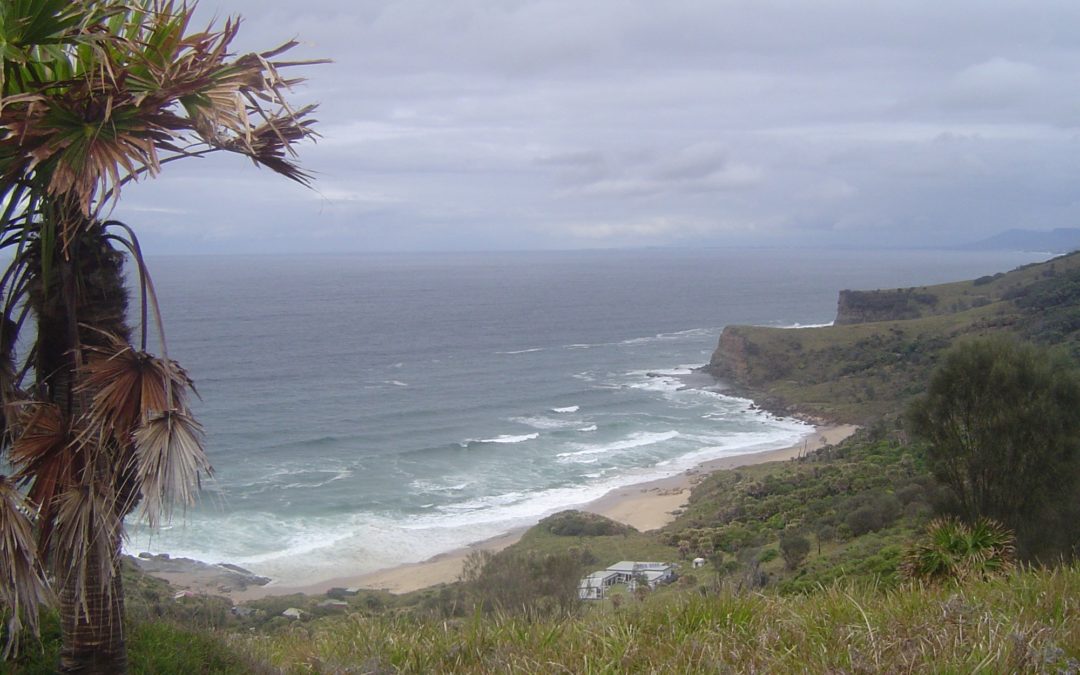 Eleven of us got together at Central Station and headed off in the train to Helensburgh Station, where Tran was waiting for us. I got some confirmation for the direction to Metropolitan Tunnel from the station staff, which was where I thought it was – underneath the aptly named Tunnel Road, and we all headed off there. At first we spotted the entrance to Old Helensburgh Tunnel, closed off by a formidable iron grille, and it was thus simple enough to turn right along the old track and we found the northern entrance to Metropolitan Tunnel. This is one of the 5 Illawarra Tunnels bypassed by the present line in 1915. We walked along a rather waterlogged section of the formation and headed inside the tunnel. There is a short section of track the sleepers of which provided stepping “stones” above the mire, and where the track ends there was a fairly solid track which continues further on into the tunnel. We went in a fair way but unfortunately we didn’t have enough torches for everyone to see, and turned back. But not before seeing a few glowworms in the roof above. They didn’t put on a very good show; part of the problem is that the tunnel is dead straight for a distance and aligned almost direct north-south; it lets a lot of light in from the entrance. I would say though that a visit at night would be more rewarding.

Anyway, our detour into Metropolitan Tunnel over, we headed off on the walk proper. I recalled the accidental short cut that Nathan had discovered on the walk we did (in the opposite direction) in March this year. We thus walked up Tunnel Road until we came to a “service road” to the left. We went along this gravel road which passes behind some houses (complete with yapping Scottie dogs) until eventually coming to a tar road. This lead straight to the gates of Helenburgh Tip, from which a hard-to-see track starts left from the road and skirts the wire fence of the Tip for some distance before becoming the Burgh Track proper. “Nathan’s Shortcut” (we will call it) cuts about 1.5km off the walk as it’s described in “Wildwalks” notes. Anyway, the Burgh track headed off level and after a while we started to descend into the Valley of the Hacking River. The Vegetation changed from open woodland to a jungle of Cabbage Tree palms and vines. After a while we came to a simple NPWS sign with an arrow which took us deeper into the “Jungle”. At one place a sign pointed to Garawarra Farm, but as for track – well there was none! The ground here was covered with leaves showing no hint of a track, so it was just a matter of heading in when seemed the right direction and eventually we came to the crossing over the Hacking River. The river was quite low compared to the March trip and the stepping stones provided a dry and easy crossing. From there is was only 100 m to Sir Bertram Stevens Drive, which we crossed and proceeded on the path up the other side of the Hacking R valley to Garawarra Farm car park. On the reverse trip in March this section seemed so easy, since it was downhill on that walk. This time though it proved to be quite a slog climbing up it. Mathilde and Claire helped ease their climb by singing the Seven Dwarves song in French (Hi ho, hi ho,….). The terrain though is quite pleasant with open grassy woodland. Eventually we reached the Garawarra Farm car park and then continued on the the path down to Burning Palms Beach. A short way along this track we came across a Wallaby grazing, and a photostop was called for. After admiring the animal (which didn’t seem to be worried by our presence) we went on down the track which opens up into Lomandra-covered terrain, and for the first time felt some warmth from the sun.

Upon reaching the beach it was clear that the surf was far too rough for swimming and so we settled down on a sheltered rock for lunch. It seems that a Python had had the same idea as it was spotted by Claire sunning itself on the rock, but it quickly took off before it could be photographed. Meanwhile we closely watched the dark cloud stretching out over the sea and looking very like it was going to form a waterspout, but to our disappointment it didn’t.  After 30 minutes the same cloud started giving us a very fine rain, and we decided to head off along the Coast Track toward Otford. We passed through the Lomandra and the Palm Jungle (the track this time being quite dry). Again this track seems easy when walking downhill from Otford, but going UP to Otford it can be a slog in places. Eventually we reached the top of the Escarpment, and admired the view which stretches as far as Shellharbour in the south and Garie Head in the north.  Then it was off to the Otford Pie Shop, where we had refreshments including a “Chocolate Chaud” for Claire. Marta fed the parrots that were hanging around – with feed supplied by the Shop owners.

After refreshments it was off down the hill to Otford Station – which is actually the steepest part of the whole walk. The onto the 3.15pm train back to Central. Well not quite; Tran got off at Helensburgh for her drive back to Liverpool, and the rest of us had an improptu train change at Hurstville due to problems with the “State of the art” OSCAR set we were in (That’s Cityrails term for an OSCAR set, not mine!).

This was a pleasant walk in mild weather with (almost) no rain, and enjoyed by all.  What is more, no one reported picking up any leeches – surprising giving the history of this path. A couple of us, however, picked up a much more unwelcome hitchhiker; both myself and Jeffrey found a Tick on us. So beware if you walk this track in Spring, which tends to be Tick season.

Oh, and we didn’t encounter any ducks asking for money (ask Claire about that!).