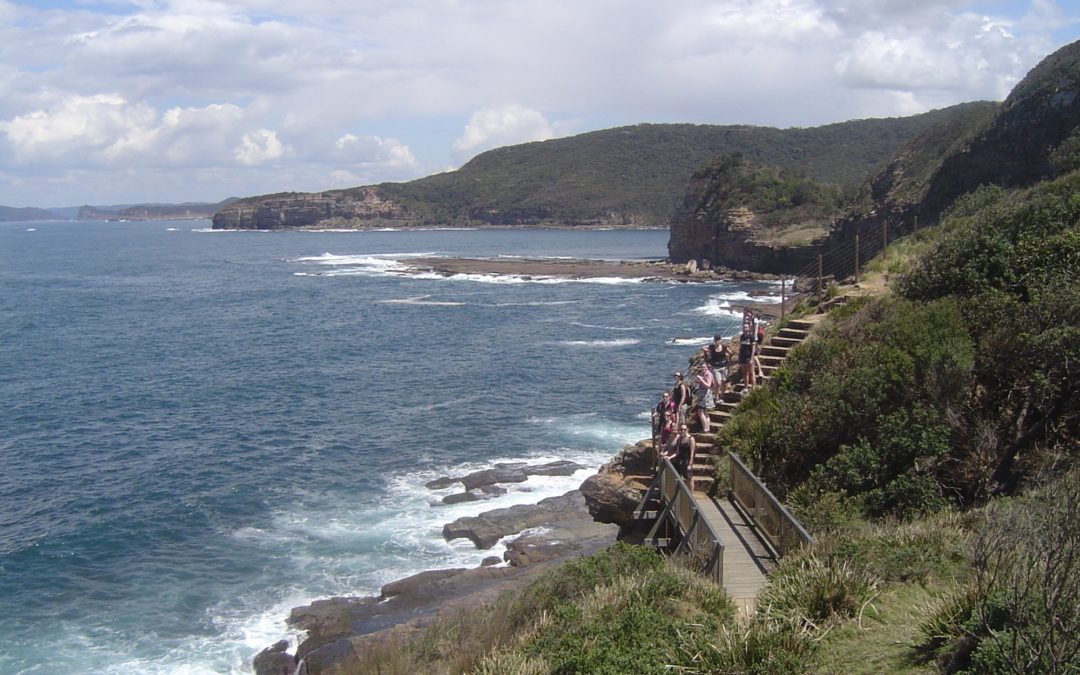 We gathered everyone together at Woy Woy Station and set out in the three cars (with just enough seats for everyone), for the 20 minute drive to the Little Beach Car Park, the start of the walk. Then a car shuffle was made, leaving my car at Killcare Beach.

The walk took us initially towards Little Beach, and then branched off to become the Bouddi Coast Track. Starting in fairly dense woodland, it eventually opened up into tall heathland dominated with Banksia trees. We walked in pleasant sunlight and the sand on the track was a brilliant white (see photos). At the same time as we headed south towards Maitland Bay, a very large Cumulus cloud appeared in the distance, looking very like it was going to give us a heavy dump of rain. Eventually it went to the west and for the rest of the walk we were fortunate to have sunshine, a nice change from the wet conditions of the previous 2 days.

The walk proceeded at a fairly quick pace and by 12noon we arrived at Maitland Bay, to find that we had the beach more or less to ourselves – it seems that the cool weather had deterred most people as there were only two other family groups there. We had lunch at Maitland Bay, and then we walked around the rocks under the northern headland to see what remains of the wreck of the S.S. “Maitland”, which ran onto the rocks there in 1901. Not much remains now, just part of the boiler and some iron plating. But there was a lot of marine life in and around the rock pools, with lots of Cunjevoi (Sea Squirts), lots of crabs that scurried into crevices when they saw us, and little fish. The Cunjevoi responded to our touches with squirts of water, but Elisabeth said that they might get dehydrated and they won’t be happy. (Cunjevoi by the way are regarded as being the most primitive of the vertebrate animals). After the rock hopping we then continued along the coast towards Bullimah Beach and Killcare. There were fields full of Flannel flowers at some places, and one walker reported seeing a small Brown Snake dash across the path in front of her. We passed by Bullimah Beach, then along the boardwalk (put in to stop severe erosion along this almost desert-like section) to Putty Beach, which is actually the northern part of Killcare Beach. We continued along the beach for another 1.5 km until reaching the surf club. While waiting for the cars to return from the car shuffle, some of our group braved the cold water for a dip in the surf (water was 17deg C but felt like 7 deg C). Some also had coffee and icecreams from the surf club kiosk (and they make a quite reasonable Cappucino!). Then it was off to Woy Woy Station for some for the 4.23pm train, and home by car for the others.

This was a pleasant walk under sunny skies although a bit cool for the time of year. Along almost the whole walk there are extensive views across the ocean and as far south as North Head (Manly). Ec=veryone seemed to have a good time.