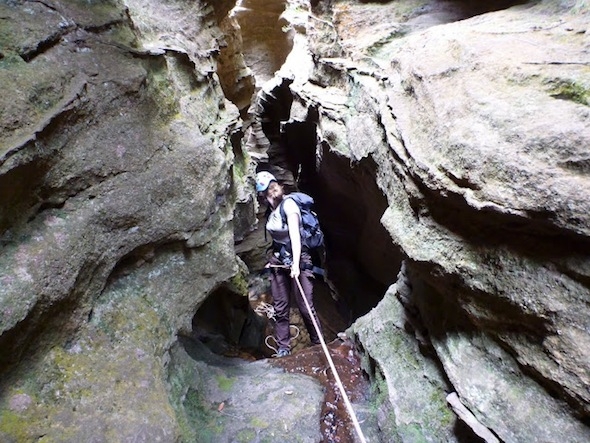 EDIT: FYI, the canyon called Penrose Gully in this trip report should actually be named “Crooked Crevice”, which is the name it was given by the first descent party.

There’s no better inspiration for revisiting a canyon than the chance to show it to someone new, and be able to rediscover it through their eyes.

I’d organised this trip after Dave and Thelma put a shout-out on the OzCanyons group, asking if anyone was willing to take a pair of Irish canyoners out on a trip while they were in Sydney. Given they come from a nation that has the grand total of two canyons — located at opposite ends of the country — I figured they had a serious level of commitment that needed rewarding! 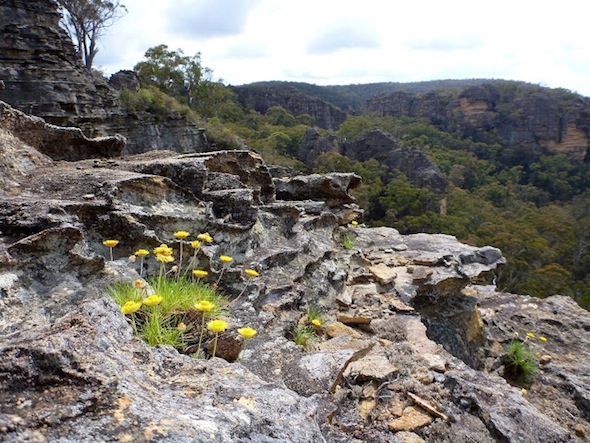 Unfortunately our stunning early spring weather (with temperatures climbing into the mid-30’s just a month after winter!) came to an end the day of their arrival, with clouds, cold winds and the chance of light rain turning up instead. Given the weather was against us, I decided on a classic dry canyoning double: Tiger Snake and Penrose Gully Canyons.

The choice of canyons seemed particularly smart as we met up at Zig Zag, with even the visitor shivering away in the chilly conditions. We drove out the Newnes Plateau and found we had the carpark, and therefore the canyon, completely to ourselves.

We made short work of the walk in as I was keen to move fast and keep the option of Wolgan View Canyon open for a late afternoon detour. 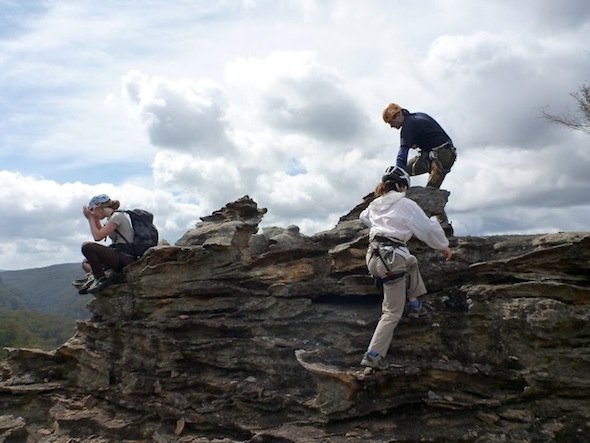 Climbing up a pagoda overlooking the valley

Before long we were at the upper constriction of Tiger Snake, and for the first time I decided to climb up the pagodas above and check out the view. There were some beautiful little pagoda daisies growing there, and the vista was well worth the short detour. We also had a look down the slot (you realise just how short this upper canyon section is when you see it from above) and checked out the alternate anchor for the first drop.

We climbed back down, with most of the group scrambling the first, awkward drop, rather the doing the little abseil that lands you in a pool of water.

This upper section of the canyon is short but attractive, with several abseils and a jump over a shallow pool. There were some interesting climbing techniques used to avoid the water, while Dave’s attempt to jump a pool left him over-ballanced, causing him to topple in and end up soaking wet. So much for a dry canyon! 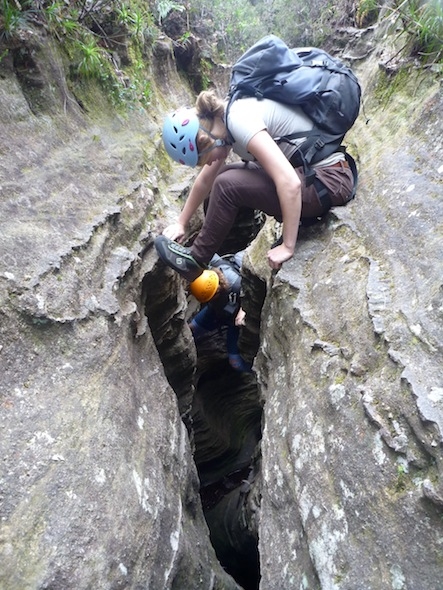 The climb-down into the upper canyon section (photo Tony Ruzek)

Through the final squeezy section, where you have to lose your pack, then a down-climb on some tree roots, and we were at the nice clean abseil down a 20m waterfall that finishes this section.

From here there was some more pleasant creek walking — with a couple little scrambles — before we reached the lower canyon section. As usual, I nearly walked past the turnoff where you scramble up above the slot.

We chose the big 30m abseil that takes you down through the dark, winding constriction, rather than the short upstream drop. This section is magnificent — it’s one of the best canyon abseils around in my opinion — and everyone enjoyed scraping their way down the curves of the rock into the inky darkness below. 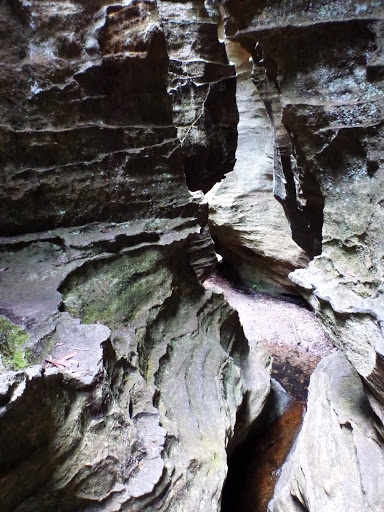 It’s so dark in this section that the old point and shoot camera became useless — especially on an overcast day — so we gave up on the photography and just had an explore. We climbed up a slippery little waterfall, and admired the impressive rock arch, before continuing on down the narrow canyon.

Sadly it all finished far too soon — I’d forgotten how short and easy this canyon actually is — so we decided to explore the glow worm cave just downstream. We found a couple, but there seemed to be less than usual and they weren’t very bright.

We climbed up the steep exit, and right as we were checking out the view from the top we heard some voices. Sure enough, two people came wondering down the hill. That seemed odd enough, until Em started talking to one of them who she knew from rock climbing. Talk about killing the wilderness vibe when you can stumble upon acquaintances as if you’re down at the shops! 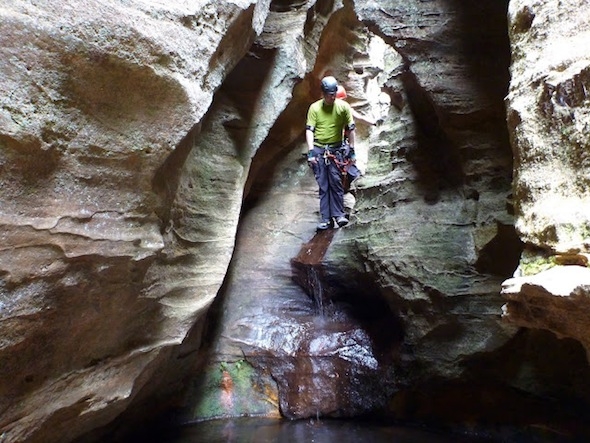 Dave moments before his failed jump over the pool

They’d been planning to do the canyon too, but had accidentally missed the entry and been walking the exit track. We offered to point them in the right direction, so they walked with us back up the hill.

Not long after we sent them on their way we arrived at the turn off for our next canyon. We paused here for lunch on the rocky outcrop, which was actually quite pleasant, as the day had warmed up far more than predicted.

The next canyon is very short, but incredibly tight, and taking packs through isn’t recommended. Given that, we stashed all our excess gear — just metres off the track — before setting off. For the European canyoners the idea of being able to leave valuables so close to a popular canyon seemed bizarre, but I’m yet to have something pinched in the bush (probably because most canyoners are lazy and don’t want to lug out extra weight on the exits!)

Em abseiling in the upper constriction of Tiger Snake

Penrose Gully has become much more popular in recent years. When I first did it, four or five years ago, there was no track. Now a clear foot pad was visible in places. The bolt at the top of the first abseil is also a blight on the canyon, and it’s completely unnecessary!

We all dropped in, and were quickly at the second abseil, which is by far my favourite spot in this canyon. The anchor looks terrifyingly dodgy, the start is awkward, the constriction is so tight your body gets jammed, and the slot winds attractively below you.

We all squeezed our way through the remaining section, which involves a few tricky wiggles and some bridging here and there to keep above the tightest sections, and before long were at the final drop. 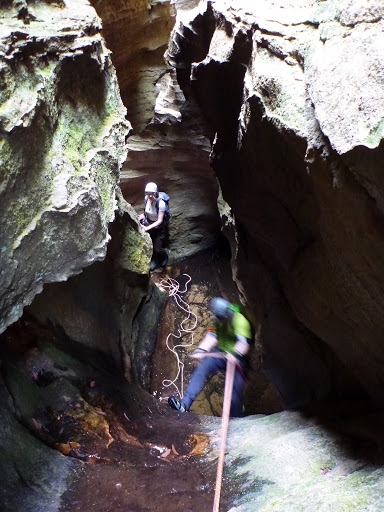 Dave on the same abseil

Even the exit to this canyon in nice, with some great views going up, and a spectacular lookout at the top.

Our visitors got a little taste of Aussie scrub, with the exit track fairly indistinct, and as usual I took us slightly off course, requiring a short hand-over-hand back into the creek.

Soon we were back at the packs and charging along the track. Our only pause came when Em excitedly spotted some wild dog poo, which she picked up gleefully before asking if anyone had a plastic bag she could use to take them home in (looking at scats through a microscope is apparently good fun…) 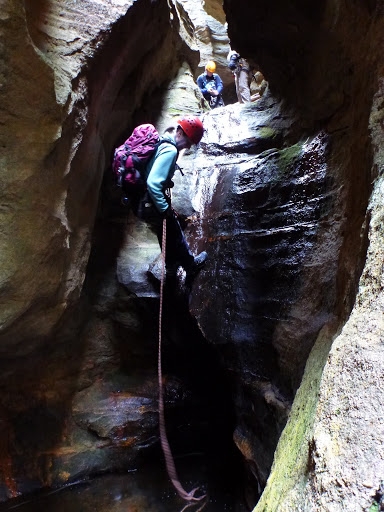 Back at the cars we briefly tossed up the detour to the Dry Canyon, but when Dave and Thelma pulled out some cold beers from their camper-van there was a unanimous vote to enjoy a cold drink and an early finish to the day.

It was great to meet a couple keen international canyoners, and their stories really inspired a desire to make it over to Europe for some canyoning one day (although probably not to Ireland’s two canyons!)

And while it was a nice day of canyoning, having now visited Tiger Snake and Penrose Gully four times in five years I think I’ll give them a bit of a rest before I next return… 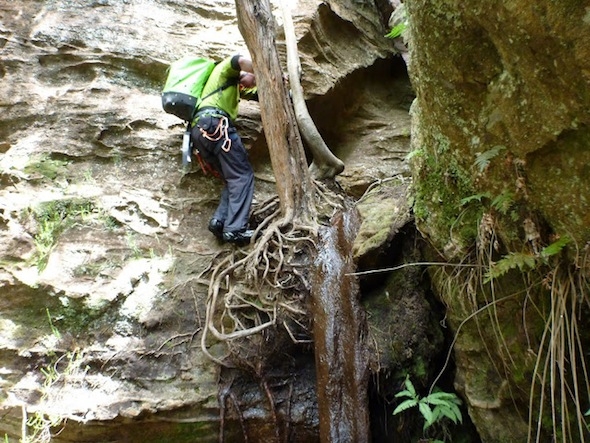 Dave climbing down the tree roots 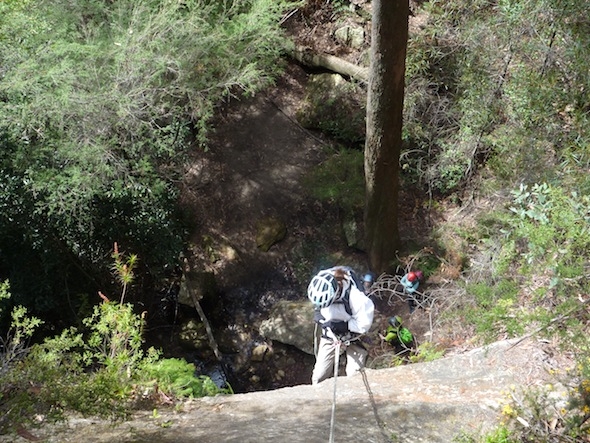 Julie abseiling the waterfall at the end of the upper constriction 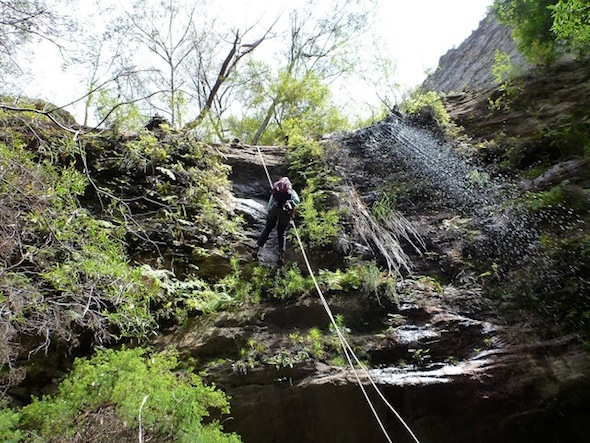 Not much water flowing over the waterfall! 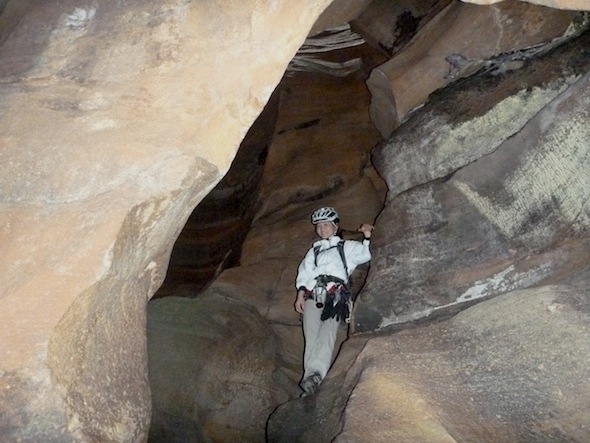 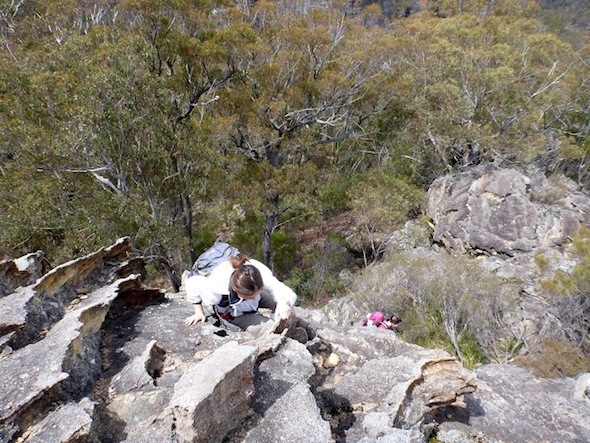 Scrambling up a pagoda on the exit 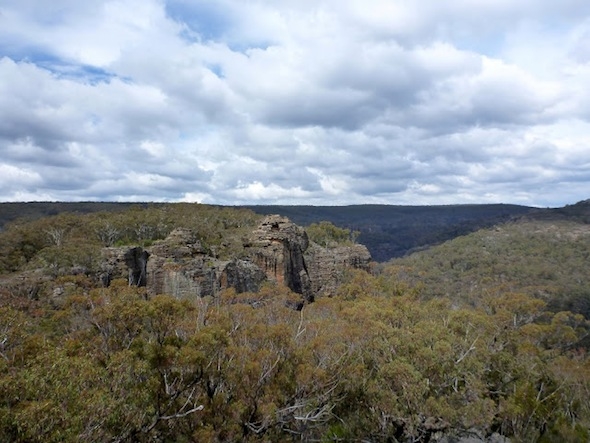 The beautiful canyon country on the Newnes Plateau