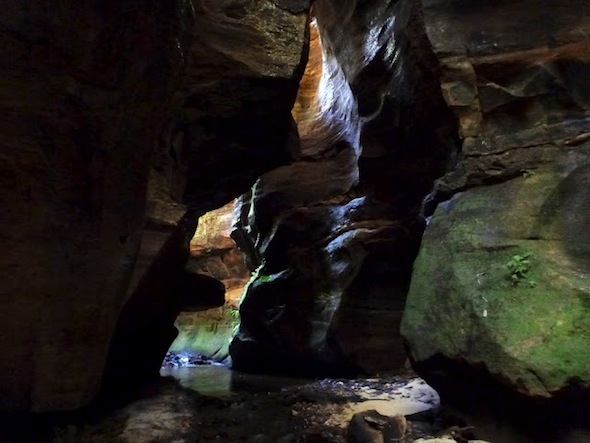 Dargans Creek Canyon is one of those easy day trips that had been left on the back-burner for ages: too short to be worth spending a full day on; a far enough drive to make it an slightly impractical half day; and no abseils, so no good for teaching beginners rope work.

I’d been to the area as a kid — nearly 20 years ago I worked out — and leaped off the water jump into the lower dam (a somewhat terrifying rite of passage for local kids for decades). I’d even played around on the old metal stairs that lead into the creek below, with no idea what else was hidden in its depths.

We spotted a young Eastern Water Dragon in the creek

This inspiration for this trip was simple: a weather forecast promising three 30+ degree days in Sydney, which is pretty good for just a month into Spring. I hedged my bets, picked the middle day, and decided on a canyon that was wet, but short.

Public transport delivered big time, with all four fellow canyoners arriving at Penrith Station on time, while I was a couple minutes late with the car. We set off north, basking in what was promising to be a stellar day.

At North Richmond we paused for a bakery breakfast (My Dad’s, not the North Richmond Bakehouse!) before hitting the road again. We got a great run up the mountains, except for a patch of traffic caused by an incredibly slow moving truck. 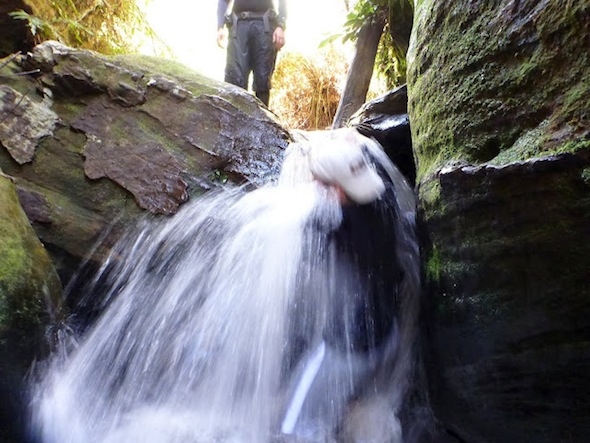 Adam getting dunked on the first down-climb

It wasn’t much after 9am when we pulled off the tar and onto the short dirt road to our destination. After a couple pauses to double check where to go in the maze of tracks we drove as close to the lower dam as my 2wd would allow.

The plan was just to pull on our wetsuits here (well, those of us who had them), so we could carry the bare minimum of gear with us. The warmth of the day made us question that decision almost immediately!

From the dam we had a quick look around for the old stairs, eventually spotting the faint footpad that leads to them. Once there, we discovered a gate had been installed to discourage their use. I say discourage, because it is easy to climb around and has the vibe of something placed there as a legal arse-covering technique, rather than as a genuine deterrent to prevent access. 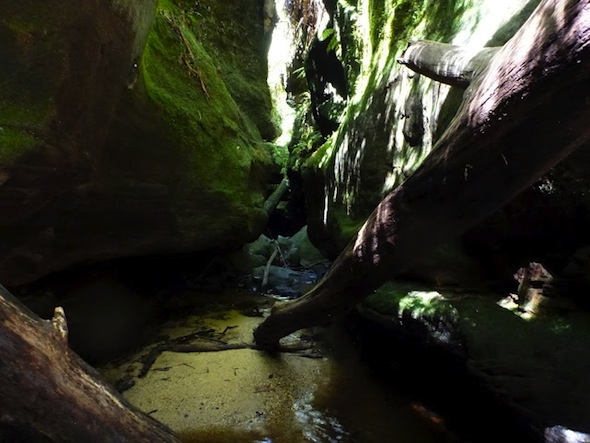 Down in the creek we found the remains of the old pumping station, as well as the interesting brick and concrete piers that support a massive arch of rock which has part of the dam wall built on one side of it.

This area isn’t particularly pleasant, with the rusting hulk of a car dumped off the cliff above long ago and a fair amount of rubbish that has clearly been thrown off more recently by those visiting the dam for a swim. There’s also a huge amount of sludgy orange clay, which seemed unusual for sandstone country and made us sink in a little with each step.

Once across the creek the scenery improved, and we soon lost any trace of people, other than the small track above the bank. This section seemed to go on for a while, with a scramble between boulders and then a small canyon-looking section beneath a giant chockstone getting my hopes up before it turned back into plain old creek walking.

Eventually we got to a nice short climb down into a narrow canyon section that gave Freddy and Adam their first taste of what they’d gotten themselves in for. Most of us managed to cop a dunking here, with a good flow of water hitting us as we landed at the bottom.

Soon enough we were at the proper canyon constriction, and it was amazing. A couple climb downs — one with a fixed rope and another down a slippery log jam — took us deeper into the earth. This is always one of my favourite moments in any canyon, when the creek slices a narrow gash through the earth’s skin and lets you drop inside. 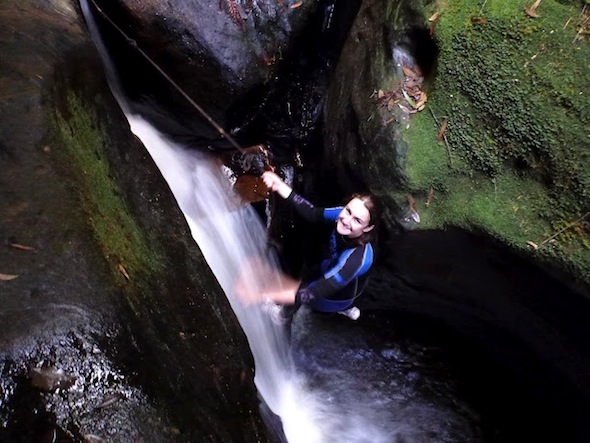 Louisa towards the bottom of the final down climb, using a fixed rope

While the canyon constriction isn’t long, probably only a few hundred metres, it was spectacular. In places it got so dark it was almost cave-like, making it impossible to photograph. The walls swirled above us, letting in just enough light to give that incredible green glow.

It was here that the two Yanks — Freddy and Adam — really started to regret their decision not to wear wetsuits, with the icy water making the two swims pretty tough.

Almost immediately after the great canyon section ends, our exit appeared on the right, but with the creek still looking so nice I decided to push on a short way. We enjoyed some log-walking along a very old, very big big and very slippery fallen tree, scrambled along the creek bed, and admired the still-towering cliffs on either side of us. 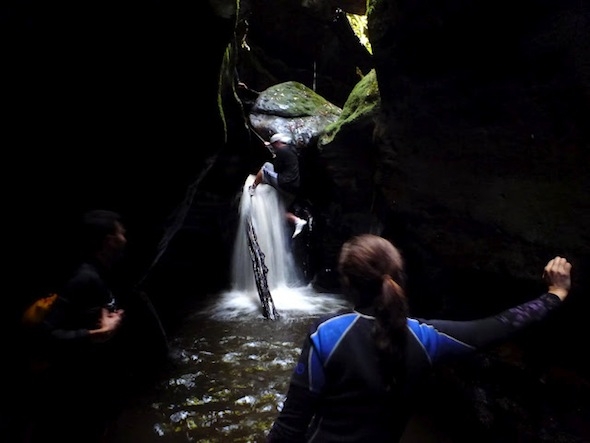 Before long it looked like things were really opening out, so we headed back to the exit. This heads up a small waterfall, with the help of a fixed rope, to a large coachwood tree with metal spikes embedded in it to allow you to climb to the top of the cliffs.

Here we were reminded of just how important helmets are, even in easy, non technical canyons, when an extremely loud expletive shot up from below. Louisa had been hit with a rock, which while thankfully quite small, left her with quite a sore head! 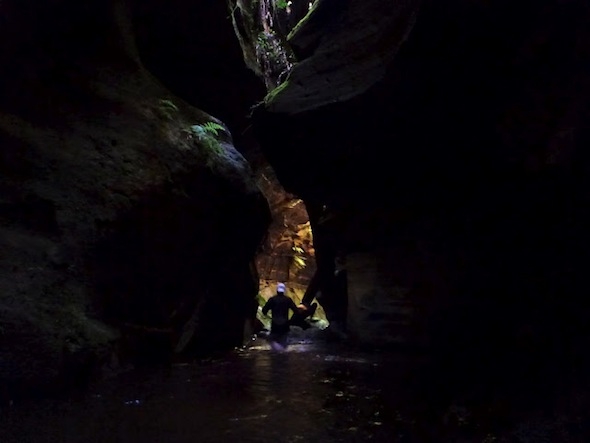 Dark constriction in the canyon

Soon enough we were all up, and after following the pleasant side creek a short way we made our way onto a rocky ridge.

The canyon has to have the shortest loop walks of any I know, because it couldn’t have been more than 15 minutes before we were back at the dam wall.
While we were all up for a swim, it was only a quick dip, as being so soon after winter the water was still quite cold.

We made our way across to the other side where the impressive water-jump is, scrambling up to the flat top of the 10m cliff.

From down below it didn’t look much, but once up on top the water seemed a very long way away. We all had a leap, eventually, while one person decided to show off with a proper dive!

A quick chat to some local airforce blokes who’d dropped in while scoping out places to run adventure training (they asked for any ideas of trips to scare the crap out of people, so I suggested our 200m abseils) and a quick look at the waterside and rope swings that locals have put in, and we were ready to head back to the car.

Best of all, we’d made such good time that we still had enough up our sleeve for a visit to Leura for some greasy food, sitting on the grass under the flowering trees that run down the centre of town.

Walking along a huge slippery log that crosses the creek 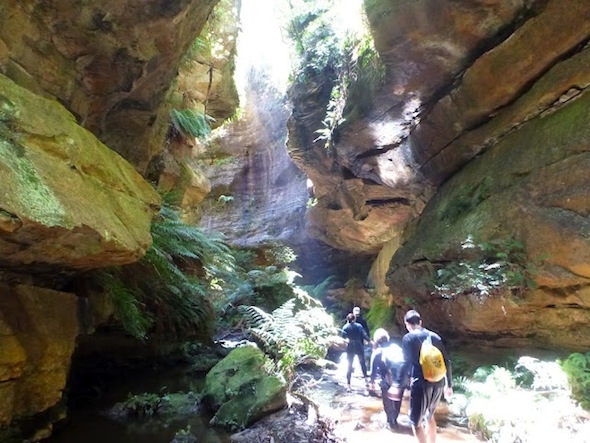 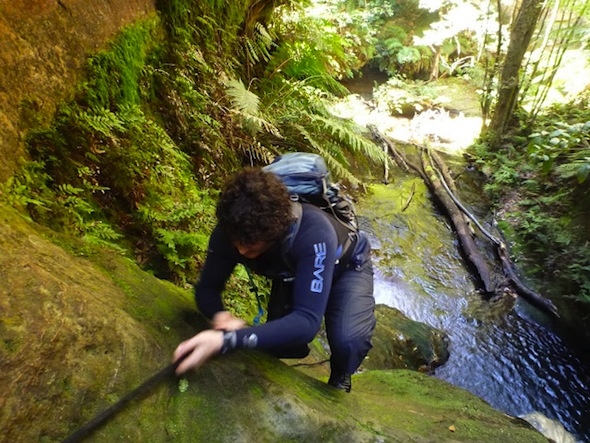 Matt climbing up the exit waterfall with a fixed rope 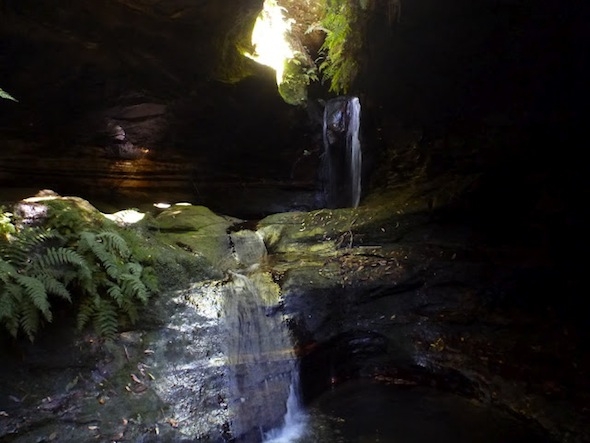 An attractive little grotto in the exit creek 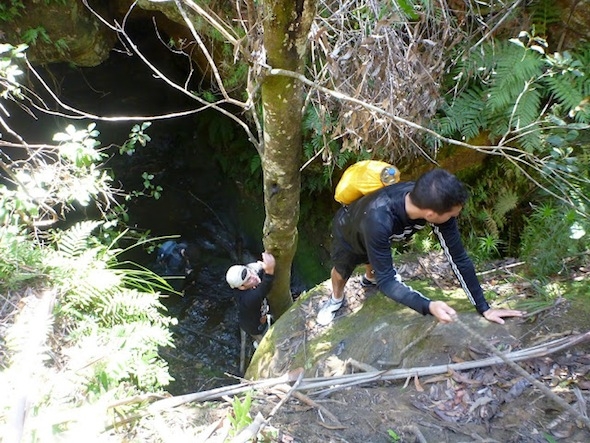 Making our way up the spiked Coachwood tree 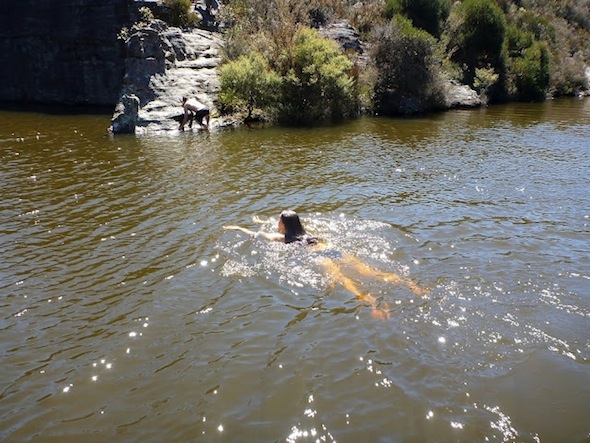 Swimming across the lower dam 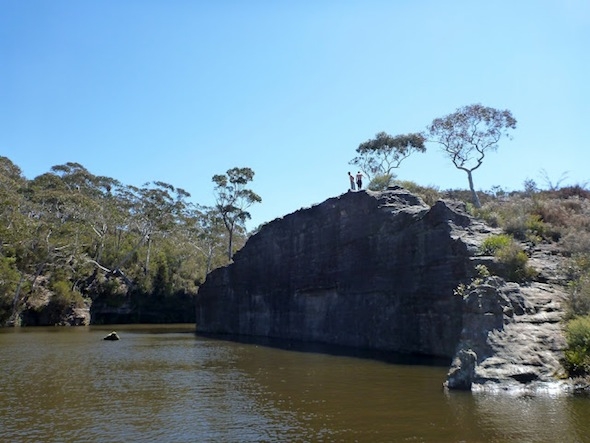 Looking down from the impressive water jump