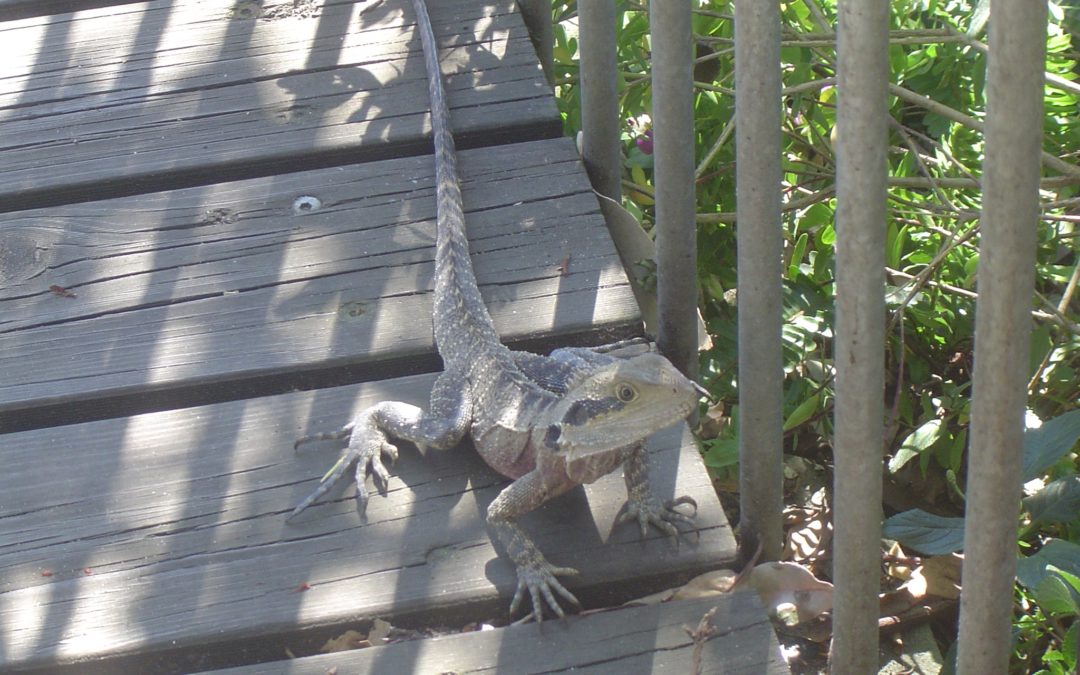 Everyone turned up at Circular Quay (not a single piker!), and off we went by ferry across to Taronga Athol Wharf. On the way Scott pointed out Fort Denison and I explained that it had been built in the 1830s to keep out the Russians. Essi from Finland (Russia’s next door neighbour) found it interesting that the Russians would want to come here!

Once at Athol Wharf we set off along the path to the HMAS Sydney memorial at Bradley’s Head. Here we saw our first dragon, a Common Bearded Dragon (Pogona Barbata). (see photos). The it was off the Chowder Bay which was fast filling up with picnickers on this very fine sunny day. Then on to Middle Head with its historic fortifications and cannon (again to keep out the Russians), and continued on along George’s Head Road and Gordon St to reach Laurie Plunkett Reserve, which is actually the old Balmoral tramline right-of-way. There is a deep cutting in this reserve; in it you would never know you were in the middle of suburbia.

Then on to Balmoral Beach for an Ice Cream break; Balmoral Beach was fast willing up with crowds and we were glad to leave them behind as we headed for the exit at the north end of the beach. There was momentary confusion here as Mosman Council had blocked off the usual pathway up the hill for repairs, but the alternative pathway was soon found. From then it was an unavoidable road bash to Chinamans Beach, along which we walked, and then another road bash uphill to Parriwi Road; this is the steepest part of the walk.

WEe walked down Parriwi Road and passed an historic lighthouse which had a pathway beside it leading down to the foreshore. Of great interest was the new sign attached stating that at low tide it would be possible to walk along the rocks on the shore edge to either Chinamans Beach or The Spit. This was filed away for future reference, but on this walk we couldn’t access the foreshore as it was a high spring tide. So it was back up the track to Parriwi Road.

EWe crossed the Spit Bridge and stopped for lunch in the shade in the park on the northern side. Then it was on to Clontarf partly via another old tramline. At Clontarf we had ouir first and only water crossing as the houses at the eastern end of the beach have their fences right up against the high water mark, and as it was high tide, there was no choice but to wade through this 100m of water. We had a brief stop after the water wade to put socks and shoes back on, and we had a visit by a local mammal, a Burmese cat. We continued on and took a look at Castle Rock Beach, but decided not to stay there for a swim because it had become exposed to a cool breeze which had come up. So we continued on the track, which by now was becoming a normal bush track, stopping at a lookout to admire the view, and eventually to Forty Baskets Beach, where we did some rock-hopping above the high tide. The same tide required another short road bash to bypass the normal walk across the mudflats at North Harbour inlet.

We eventually reach Fairlight Beach which we found was sheltered from the wind and also has a rock pool in which the water would be warm. Therefore we stopped for 30 minutes while Essi and I had a swim, and the others rested their weary feet after walking 19km so far.

Then it was on to Manly Pier where we arrived 20 minutes before the departure of the next ferry. But we were in for a disappointment. When we entered the queue for the ferry the last 200 or so people – including us – couldn’t board as the freey had reached its 1000 pasenegr capacity. there was nothing to do then but wait for the next ferry 30 minutes later in croweded conditions. I had a letter published in the “Manly Daily”newpaper today about this; link: http://digitaledition.manlydaily.com.au/#folio=27

Antway we eventually got back to Circular Quay and we went our own way back home.

This was an enjoyable day for all in very fine weather.