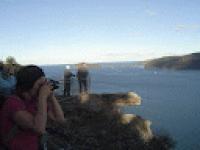 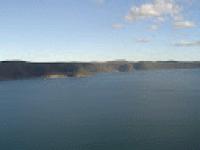 With some dropouts due to illness and misadventure, the walk was reduced to just the two of us, and it was easy to make a decision to walk to Pearl Beach instead of doubling back to Wondabyne as originally planned.

I met Mariacristina off the train at Wondabyne, and we proceeded to Mt Wondabyne via Kariong Brook. The falls there were running fairly full after the recent rains and were quite picturesque.
Then on to Mt Wondabyne itself, making an entry in the NPWS logbook on the way. We also found the Aboriginal tool-sharpening grooves on a rock platform – they were well hidden by a luxuriant algae growth and you had to know they were there to spot them. The algae turned out to be very slippery as we both almost went for a slide.
We were disappointed though that we didn’t see any pythons on the way.

There were plently of Boronia bushes in bloom – the photo does not do justice to their beautiful purple hue.

On top of Mt Wondabyne we had lunch and enjoyed the 360 degree view which extends out to the Blue Mountains, as well as to Whale Beach and out to sea. Unfortunately the view of the Woy Woy garbage tip was also prominent.
It was a brilliantly blue sky with no haze to obsure the views.

Then it was on to Pearl Beach via Warrah Lookout, which provided yet more extensive views over the mouth of the Hawkesbury River.

We arrived at Pearl Beach just on 4pm, making the trip of 20km in just over 6 hours including luch break. We were there in time for the one and only afternoon bus (4.24pm) from Pearl Beach to Woy Woy Station. there it was only a 6 minute wait for Mariacristina’s express train home, and mine going a bit futher north.

This was an enjoyable day with beautiful clear winter skies. But be warned: this is not a trip for summertime. The track has little shade, crosses extensive exposed rock platforms, and no backup water sources of any worth between Mt Wondabyne and Warrah Lookout. Even in winter we could feel the heat coming off those rock platforms.