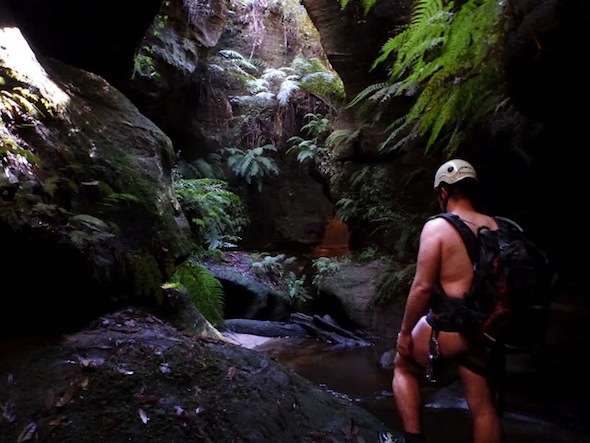 The gauntlet had been thrown down, and the challenge had been accepted by a handful of hardy souls — to go wet canyoning in the absolute depths of winter — and so Aussie FreezeFest was born.

Julie had been trying for a while to get some interest in a local version of what has become an institution in the US, but for some reason people kept coming back with silly comments like “canyoning is a summer sport” and “you’ll all freeze to death”. Valid points, I suppose, but the story of human evolution has always been about pushing the boundaries, (what doesn’t kill you only makes you stronger and all that jazz). And so the date was set — the weekend in the very middle of winter. 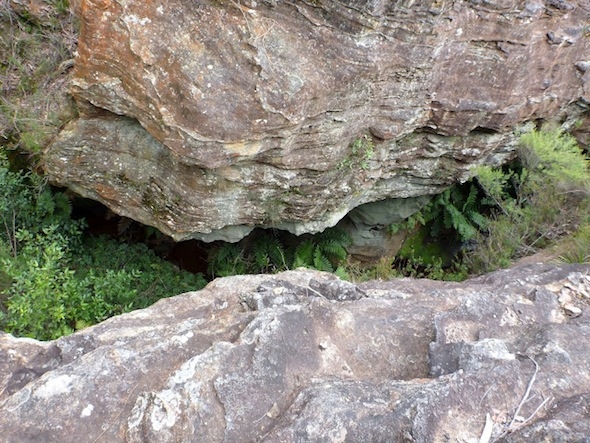 Despite the invitation being put out far and wide, in the end there was only one club keen (or stupid) enough to take part, with a total of seven hardy canyoners entering the icy slots over the two days.

FreezeFest has become huge in the states, where the “bad idea that caught on” has grown in a decade from four people in its first year to 78 participants this time round. And sure, the Yanks might get snow and ice in their canyons, but we had a trick or two up our sleeves to up the ante and claim some national pride.

Our plan was to ease ourselves into it, spending the Saturday doing a couple canyons with deep but short wades to get acclimatised, before going for a fully wet canyon, involving multiple icy swims, on the Sunday. 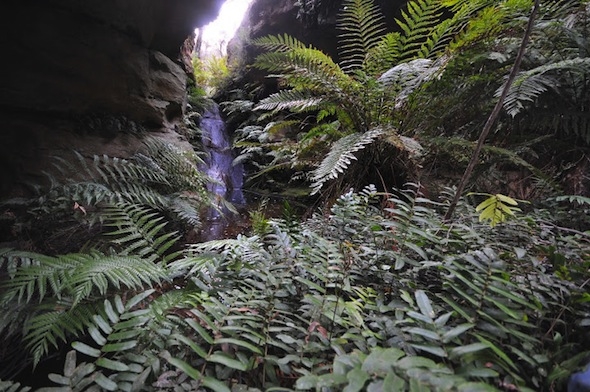 As we drove up to Mt Wilson on the Saturday morning we were met with clear blue skies and radiant sunshine. So much for FreezeFest I thought to myself. More like Luke-warmFest. Of course when we got out of the car, and the first icy blast of wind hit us, I started to lose some of the cockiness.

We set off towards Wotta Canyon, a tributary of Birrabang Canyon, through attractive bush and open mountain heathland. Eventually we turned off into the valley — a little past the proper point — bashing our way down to the creek. Shortly it began to drop, carving a waterfall between two rock pagodas.

We scrambled around this first obstacle, making our way down into the narrowing creek. Soon we were at the first drop that had to be abseiled. It was only short, a couple metres, but it went straight into a deep pool. 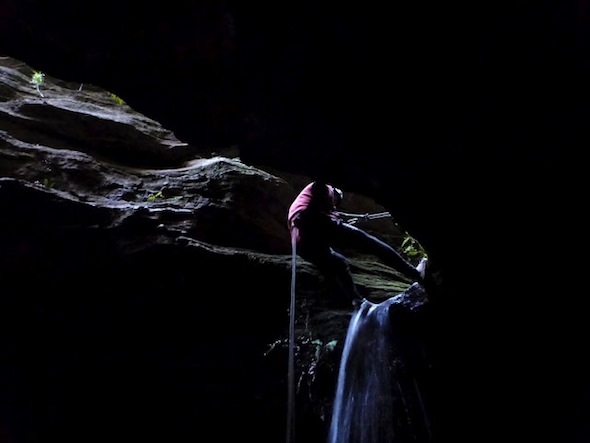 The canyon sections were short, but the abseils were attractive

Harnessing up, no one was particularly keen to go first, but one by one we dropped in, wading neck deep a few metres before clambering up onto a rock shelf. Holy crap was that water cold! The second half of the abseil was dryer, which we were all very thankful for.

Standing at the bottom of the drop one member of the group was already really feeling the cold, so some warm clothes were pulled out of dry bags and the first of countless changes was made (in the end there were two people who insisted on moving between wet and dry clothes for each deep pool we had to drop in to). 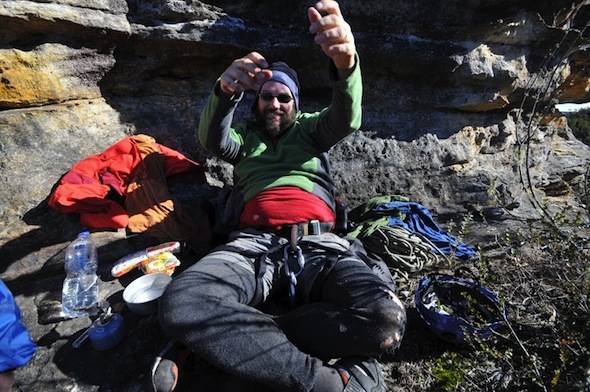 Wotta isn’t much of a canyon, so before long we were out of the constriction and instead warming ourselves up by picking our way through a forest of fallen trees. I can only imagine they were all brought down by that huge storm a year ago, because I don’t think I’ve even seen a canyon or creek anywhere with so much timber blocking the way ahead.

Finally we reached Birrabang Canyon, at a very attractive creek section, following it a short way to a point where we would exit on the other side. We only came to one deep pool, and it could easily be avoided on ledges to the left.

We warmed up on the exit, pushing up to the ridge top where there was finally some sun coming down. Unfortunately there was also plenty of wind! 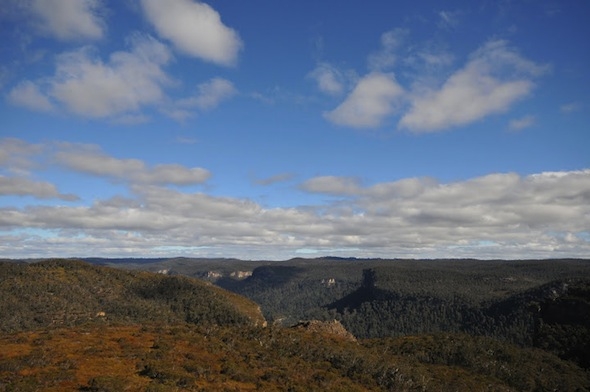 Along the ridge we walked to our turnoff into Better Offer Canyon — a distinctive rock pagoda. We decided to pause here for lunch, finding a small area behind it that had sunshine streaming onto it but was almost completely in the wind shadow. When we did move to admire the views we were almost blown away.

Down into our next canyon we went, scrambling a small waterfall and along the creek before an impressive narrow slot cut away below us.

This abseil was stunning, but best of all we were able to finish just above the water and walk around some ledges. 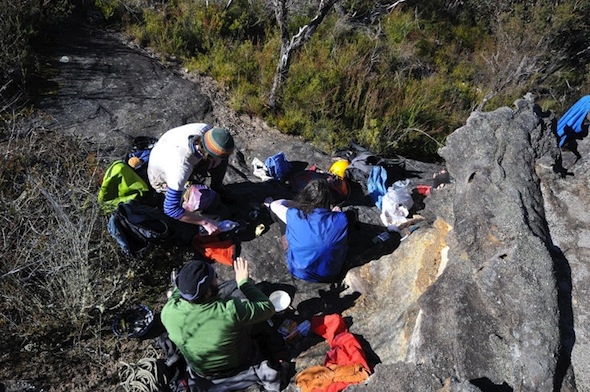 As we continued there were some short but attractive constrictions, and a few more wades to deal with. Then we came to a point where the creek plunged down into an impressive gorge just before it joined the Grose Valley.

We paused to explore a shale ledge in the sandstone cliffs that took us out along the side of the massive gorge, offered views over the chasm and the two remaining abseils far below. Unfortunately it ran out just before the corner where we would be able to look out into the magnificent Grose Valley.

The next drop was stunning — and best of all dry — with the winter light illuminating the rock on each side different colours. A final abseil, where Drew demonstrated a very unconventional technique, and we were done. 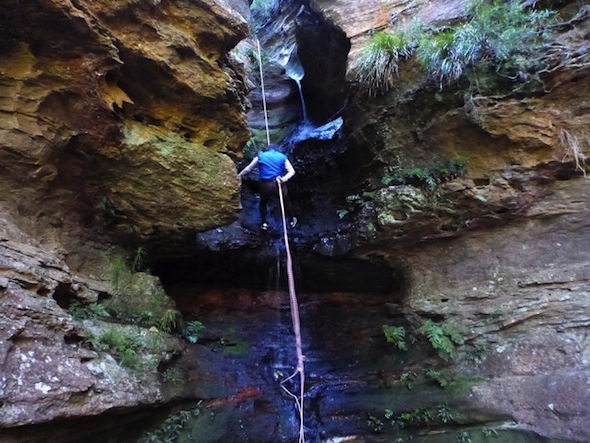 Down the boulder chute we went, then around under the towering sandstone cliffs on the left, enjoying glimpses through the trees of the amazing upper Grose gorge.

Our original plan was to finish by heading up Birrabang Canyon — which can be reversed — but with the short winter days we decided it was best not to. Instead we followed the creek a very short way, then went up a stunning pass onto the pagoda-tipped ridge above where we were greeted with incredible views over the surrounding area.

The wind was still howling, so we didn’t dawdle for long (there was no temptation to do any naked star-jumps), with an easy ridge-walk taking us to Bells Line of Road. We still had a couple kilometres back to the cars, during which we discovered just how narrow the shoulders are on this section of road and just how fast the traffic goes. We were most relieved when we were finished. 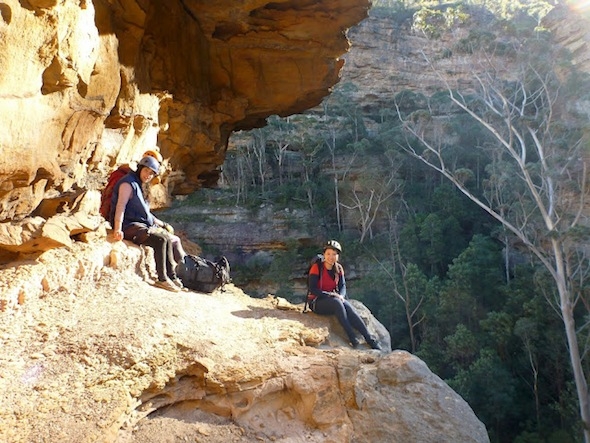 Soaking up some sun on the shale ledge

Arriving at Mt Wilson just on dark, we were greeted by the sight of a raging camp fire in the Cathedral of Ferns camp site. Julie was standing with a couple other people, so we thought some others must have taken up the challenge. It turned out they were actually a group from UTSOAC doing a bush survival course, but they still provided some great company through the night.

There was a plethora of food and drink, and we kicked on well into the wee hours before stumbling into tents (despite the now even colder and stronger wind) so when a few new FreezeFesters turned up in the morning at 8.30am they were greeted by snoring.

A couple people from the first day had to head off, and Julie was unfortunately not feeling up to the climb out of a canyon just after finishing her latest round of cancer treatment, but we only had five people ready to take the challenge.

After some discussion we decided on Serendipity (Why Don’t We Do It In The Road) Canyon. We wanted something wet, obviously, and it provided several very chilly swims. But we also wanted to be sensible and do something shorter, with the ability to bail early if we had to.

But we weren’t going to do it all easy. While two members of the group filled their packs with thermals, wetsuits, beanies and other warming attire, the remaining three made a pact to really up the ante on the yanks by doing it nude.

Now let me paint the picture of just how brave (or stupid) we were. I checked the data from the nearest weather station when I got home. It recorded that it was under 4 degrees celsius when we set off — the overnight low had been 2.3 degrees — and the top temperature of the day was 6.4 degrees. 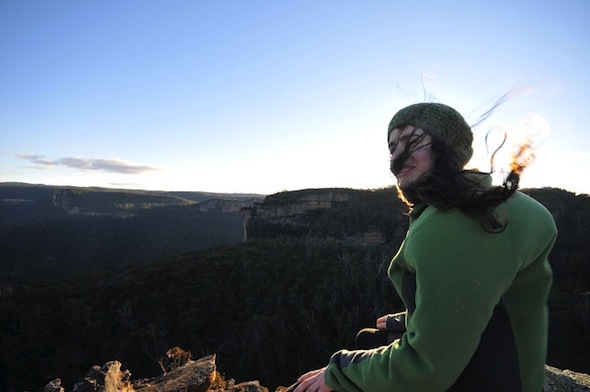 But the wind chill — which was substantial — is what made things really interesting. With the wind speed sitting just over 30 km/h, and gusts of double that, the apparent temperature never got above zero, spending the day between -0.6 and -9 degrees.

Given how cold the air temperature was, part of us thought the water might feel warm by comparison, but I can assure you it didn’t!

We set off along the fire trail — still fully clad because of how cold and windy it was — only stripping off when we hit the track that started to take us downhill, out of the coldest of the air. 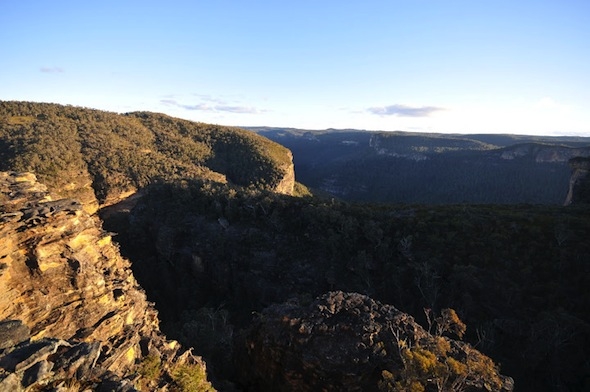 Our exit gully in the shadowy foreground (photo Joshua Hill)

The first couple abseils were great — nice and dry drops beside attractive waterfalls — so we didn’t feel the cold at all. It meant there was plenty of time to pause for photos and to enjoy this attractive upper section.

Down the creek we went, wading at points, but mainly staying dry. The ferns provided a pleasantly tactile feel on our naked skin. This section went on for some time, and all the scrambling meant we were nice and warm.

Then we hit the main constriction. Pausing on some boulders, we looked down into the dark chasm below us. It wasn’t deep, but the abseil meant enduring the spray of the waterfall, squeezing between a wet log-jam, then jumping into a deep, dark swim. 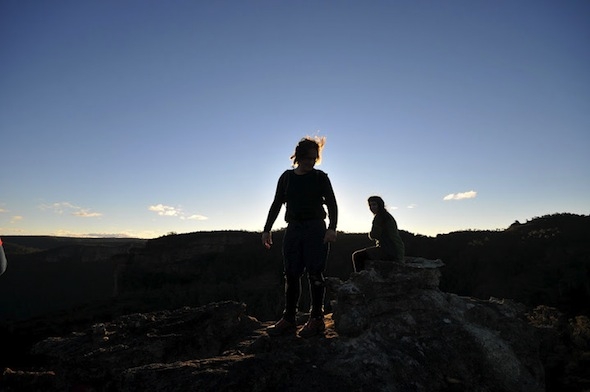 It was at this point — while we still felt warm and cocky — that Joshua decided to throw down his expletive-laden challenge to the yanks to take on the nude FreezeFest idea. Lucky we did it now, because a few more swims later we were feeling far less cocky!

There were a couple more abseils, a couple more swims, we bridged a narrow canyon section (which had I not been completely frozen I would have swam) and we were near the end.

By the final drop, into a deep pool with a long swim, I was shivering uncontrollably. Even the two guys in the warm gear were really feeling the cold. We didn’t muck about, just wanting to get through (so much so that Drew forgot to pull the rope down and had to swim back upstream to retrieve it!) 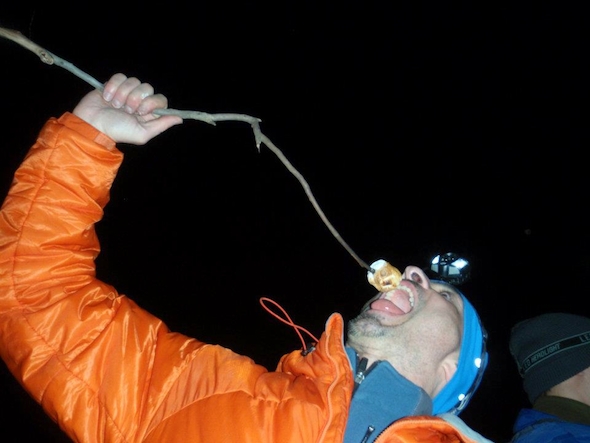 As the canyon ended, at the junction of the Wollangambe River, we were ecstatic. It had been an absolute blast! But we couldn’t really enjoy it until we were warm again, so we raced along the narrow ledge until we found some sunshine on the climb out.

As we reached a flat, sunny slab of rock the wind hit us, so we backtracked a couple metres and huddled in the sunshine to warm up. Off came the wet clothes (for those that had wet clothes) and on went some welcome warm, dry clothing for the walk out. 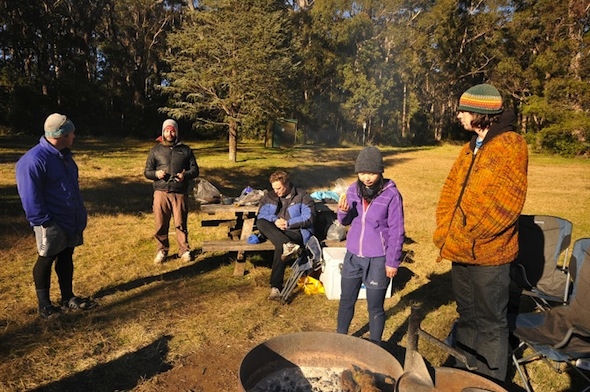 By the time we were back at camp the memories of the icy water were so faded we were discussing trying to squeeze in a second nude canyon to really maximise our fun, but the call of the coal fireplace at the Imperial Hotel along with the deteriorating weather convinced us otherwise.

Our first FreezeFest, while small, had been wonderful fun. Hopefully we will see more people willing to give the idea of mid-winter wet canyoning a go next year.

As for for the nude winter canyoning part, FreezeFest has always been about bad ideas that catch on, so perhaps we’ll see a lot more goose-bump-covered-purple-coloured-frozen-canyoner-flesh next year! 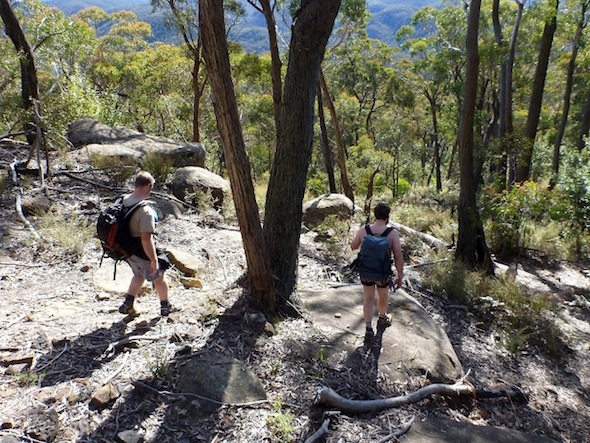 The nude walk to the canyon 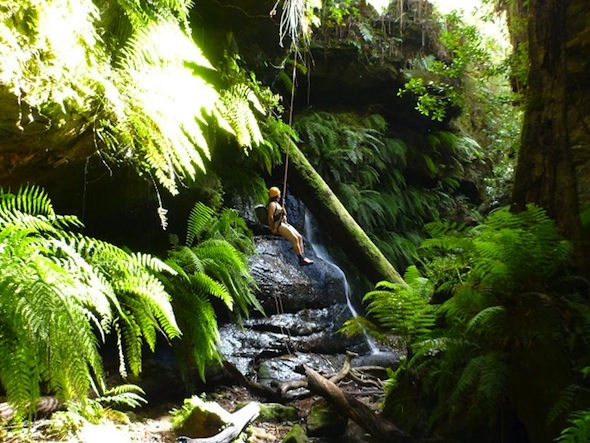 The lush green room in the upper section of Serendipity 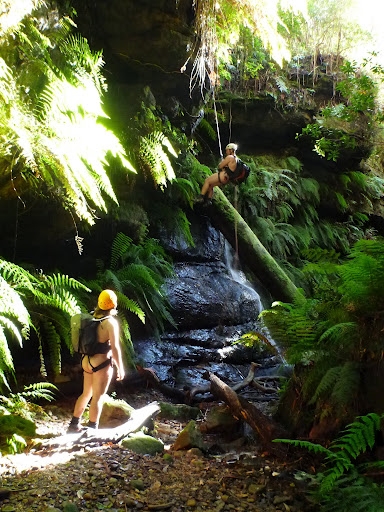 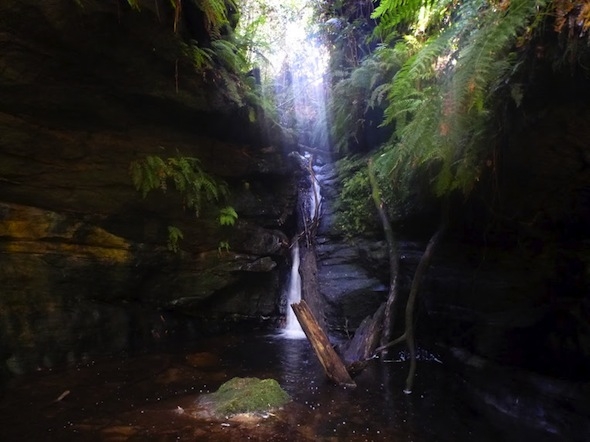 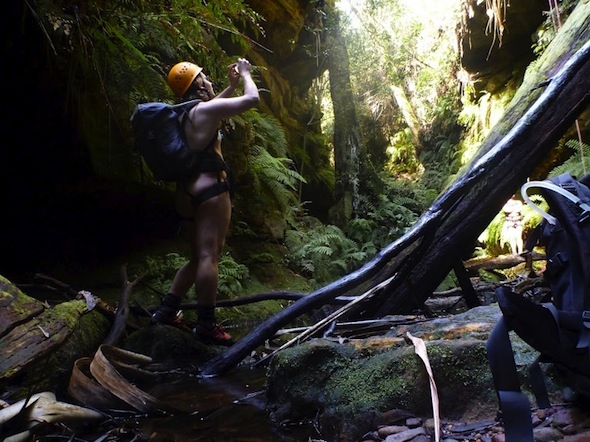 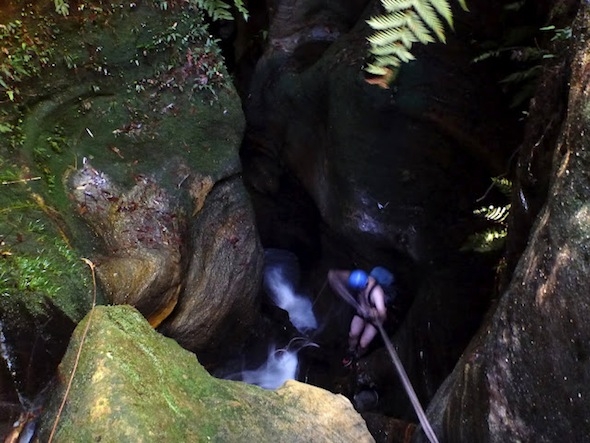 Descending into the main constriction 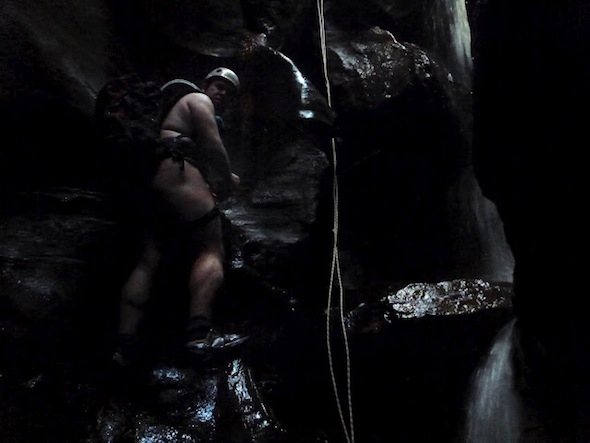 Joshua emerges from a cold swim 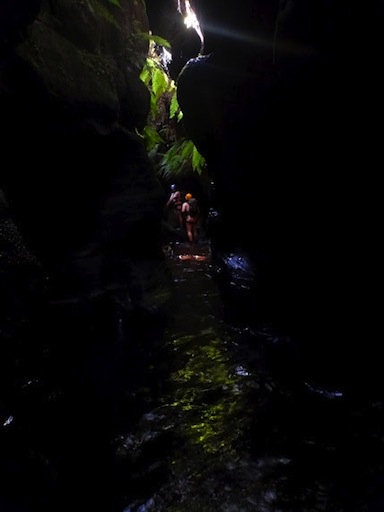 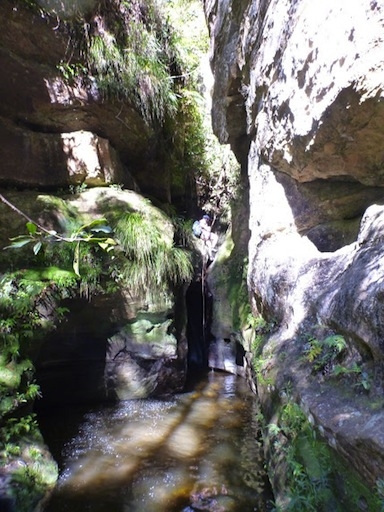 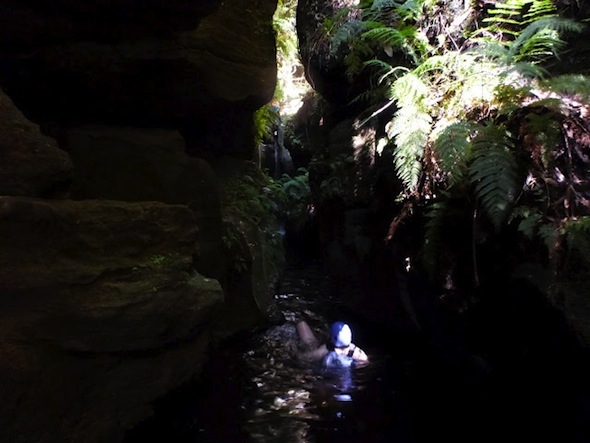 One of the final freezing swims 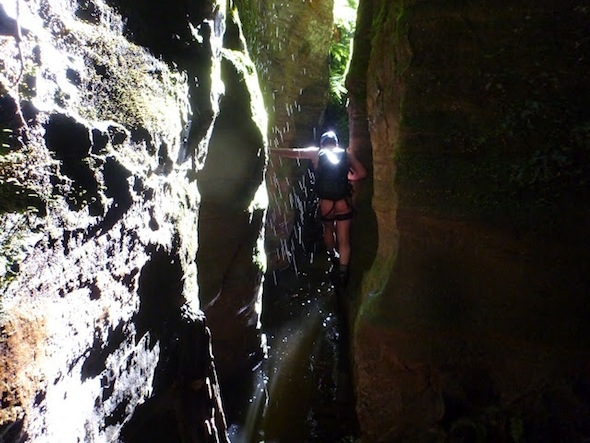