Three heads are better than one – a visit to Asgard, Thor and Valhalla Heads 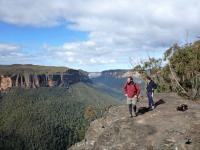 Trip Report: Three heads are better than one – a visit to Asgard, Thor and Valhalla Heads

Winter is a wonderful time to be in the mountains. The crisp, chill air is so refreshing, making for perfect walking, and the dynamic, ever-changing weather makes sure you get to see your surroundings in so many different lights that they seem constantly new.

This trip was exactly like that, with sunny blue skies interspersed with three kinds of precipitation, as cloud banks rolled through then cleared out time and again. Even the wind swung between howling gusts and moments of eerie stillness. Everything also seems to happen faster in winter, not only the weather changes, but the movement of the sun and moon, which climb and set so quickly.

We met towards the end of Victoria Falls Road at the relaxed time of 10am (okay we planned to meet a little earlier, but I was running a little late). I’d headed up the mountains earlier, catching up with an amazing bloke I’d been introduced to by Mooresy who custom makes packs in his back shed. (I’m really looking forward to getting my hands on the new canyoning day pack he is making for me!)

It had been ages since Joshua or I had caught up with Angie, so there was no shortage of chit-chat as we followed the old fire trail out to Asgard Swamp. We paused here, checking out Pyramid Rock and the pleasant little camp site, before continuing along the track to the old mine.

We followed the very clear path as it ran down beside a small creek and through the minor cliff-line to the base of a small waterfall where the small mine from the 1880′s was cut into the thick coal seam.

I was expecting it to be a little more substantial, but obviously the coal wasn’t of a good enough quality as the shaft only goes into the mountain about 20 metres. It did take a sharp right-hand turn though, so with torches off it was pitch black and felt like you were much deeper into the bowels of the mountain.

We continued along the base of the cliffs a short way to the well-preserved remains of an old beehive coke oven, which is in very good condition. It is mainly brick, which would have had to be transported to the site, but some of the outside walls were lined with sandstone which was probably hewn nearby.

Back up the track we went, returning to the now-fading fire trail, which soon turned into a single track. We followed it to a very pleasant lookout over the Grose Valley before heading up through a break in the upper cliffs and onto the ridge out to Asgard Head.

The views along here were magnificent. Not only did we have the expansive cliffs of the Grose, but down below we could see the impressive horseshoe shape of Victoria Falls. Opposite, the broken end of Burra Korain Ridge looked like an interesting place for a pass-finding trip.

As we returned north along the main ridge we had the first lot of bad weather, with clouds rolling in from the south, sharp wind, and a burst of sleet. I have to say, other than the slight sting it carried due to the wind, sleet is my favourite form of precipitation, with the little balls of ice simply bouncing off and ensuring you don’t get wet.

Before long we were scrambling down a small gully which took us back to the track near the swamp, just 20 metres or so from the pyramid rock. Our next turnoff was to the north, out the well-used track to Thor Head. We paused to admire the impressive colours of the plants, such as the wattles which are just coming out, before popping out of the forest and onto a rock ledge high above the valley.

We paused on the high-point nearby, which offers commanding views in all directions, before deciding to go off-track in search of the very end of the headland. There were a couple steep scrambles before we reached a saddle that took us to the final, semi-detached block of rock at the end. To get on top would have required either a very exposed climb, or a very exposed squeeze along a ledge, so we decided against it, but a chimney down an impressive narrow slot did allow access to the very end of the ridge.

We returned halfway up the hill, looking for a sunny spot protected out of the now gusting southerly wind, eventually lunching on a stunning ledge on the very cliff edge.
Rather than return the way we’d come, and go around the swamp to the next headland, we decided to look for a more direct route. We found a very simple, obvious pass down the first small gully, before pushing through the ferns and cutting grass in the creek to the other side.

Our first exit, up a steep slope, looked very promising, but after scrambling through a small cave we hit a short section of exposed slippery rock, and decided to backtrack. The next gully to the south — the first one marked on the map — offered a great pass directly up the wet boulders.

From on top we could see back across to our pass down, which was clearly the first break in the cliffs. From here we sidled along, heading to the cliff edge at the north of Valhalla Head.

There wasn’t as much in the way of impressive rock lookouts, so we kept moving along, nearly giving up until we found a massive crack that had opened up in the mountain side. Ange had been asking about the geology of the region, so it was great to find an example of the process where great chunks of the cliff-line are undercut, break free of the surrounding rock, then plunge into the valley below.

Soon after, we reached a stunning area where an impressive rock formation, held together with strong bands of ironstone, stood proudly above the gorge.

As we enjoyed the views and paused for some photo-pfaffing the wind returned with a vengeance, bringing with it some light snow. And what do you do when nature decides to throw its weight around? Get naked and howl into the wind of course!

Eventually the chill got too much for us, and we moved off up the hill. As we did the light snow was replaced with rain, but thankfully it was just a light shower that barely wet us.

Up on top we marvelled at some of the impressive gums, the attractive open forest, the patches of grassy swamps, and the occasional rocky areas that were almost pagoda-like.

We briefly took a wrong turn, heading towards Asgard Swamp when we’d actually wanted to push on a tiny bit further to the next ridge. A quick back-track and we were on target, having a final play on an impressive rocky high point — which offered stunning views to the east — before starting for home.

After climbing the next hill we hit an obvious track, which soon became evident was a well-revegetated old 4wd track. There were more nice views, and more nice walking, before we stumbled out onto a more used track.

When we finally got back to the road we realised the reason this track seemed better maintained was because local 4wd owners have apparently found a way around the locked gate, not only creating a new entrance, but carving an extra road through the bush a short way along where a big fallen tree had blocked the old trail off. Hopefully NPWS staff will fix this soon!

A quick trot down the road and we were back at the cars, and a quick drive had us at the Imperial Hotel. There aren’t many walks where the wait between finish and celebratory beer is less than 10 minutes! It was still early, only about half past four, so it was just a drink and some tasty wedges before we all had to set off home.

Walking outside we got one last surprise, with a heavy flurry of snow blowing around. Illuminated in the very last light of dusk it made a particularly beautiful finish to a stunning walk where Huey had well and truly decided to join us on the journey.