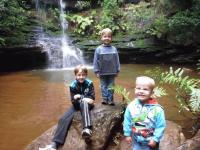 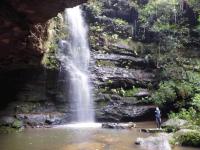 As we drove up the mountains, through constant drizzle, it was looking like we’d be stuck with a pretty miserable day. But the three boys in the back of the car, aged nine, four and two, weren’t deterred. It was the last day of school holidays and they were desperate for an adventure!

The plan was to do an interesting loop walk on the north side of Lawson, visiting Empire Pass, Echo Bluff and a number of attractive waterfalls.

We were meant to be meeting up with four people from the Sydney Uni Bushwalkers at Lawson Station, however when the train pulled in only Terence wandered out onto the north side to meet us. I didn’t want to leave anyone behind, so we checked out the platform, and went through the pedestrian tunnel to the other side just in case someone had their ‘north’ and ‘south’ mixed up (it wouldn’t be the first time!) but after about ten minutes it was clear we were on our own.

Amazingly, the rain had stopped just one suburb further down the mountains, and while the clouds remained it looked like holding off for a while longer. In the end we didn’t suffer any more precipitation during our stroll, which was a great reward for deciding to press on regardless!

We set off past the swimming pool, through a reasonable camping area (that I had no idea existed) and onto the signposted Dantes Glen Track.

Down we went into the valley, passing a worksite where some minor track works were apparently taking place, and before long we were making the steep descent down some old stone stairs into the creek itself.

At the bottom, a short walk took us into the impressive amphitheatre under Dantes Glen Falls. After a wet summer, and a day of rain, it was flowing well and the kids were keen to jump from rock to rock to get closer to the action.

We continued downstream a short way before heading up another little creek a couple hundred metres to the base of a second impressive waterfall, this time with a deeper pool underneath it that looked like a tempting spot for a summer swim if the sun was shining.

Back to the main creek we went, following the track along to the Empire Pass Track. Like so many of the historic bushwalking tracks in the mountains, this was built in the early decades after federation as the nation tried to cement its own identity (and communities like this one tried to cement their share of the tourist trade)!

In places the track followed close to the creek, which was lush and green, while in other spots we climbed higher along ledges with a substantial drop-off right next to the muddy, slippery path. It didn’t bother the two adults, but it made walking with young kids a little more nerve-wracking!

We crossed over onto the opposite bank for a while, before eventually returning to the eastern side near a major creek junction. Here we followed the track upstream towards our next waterfall.

Opposite us were some impressive cliffs, none of which are marked on the map, and the pleasant bouldery creek looked like further off-track exploration would be quite rewarding.

Despite the lack of further rain, the lush foliage dripped with water droplets, meaning we still got pretty well soaked (while the kids managed to end up with mud up to their thighs.)

Eventually we began to steeply climb away from the creek before the track flattened out and took us to the small but attractive Frederica Falls. These are hardly a waterfall — more an attractive little cascade — but again they offered a small swimming hole which is only about 500m from a vehicle access point if you were after a summer dip in nature.

We stopped here for a snack, and to pick a leech or two off the kids (which thankfully were climbing over them and hadn’t yet latched on). Amani, 2, had managed to walk this whole way on his own, so I didn’t mind too much when he asked to go in my kid-carrying backpack for the next section.

From here we unfortunately had to follow an old four wheel drive track, which made it a little less aesthetically pleasing, but the bush was still very appealing and beside us we had some small cliffs and hanging swamps to provide plenty of visual interest.

Where the road hooked around a minor spur — which came complete with some big boulders and cliffs — the kids insisted on having an explore, with Dyson heading out to the nose for the view while Uriah explored behind, finding a pair of interesting looking slugs. (We dubbed them the ‘love heart slugs’, given the distinctive red heart-shapes on their backs, but I’d be quite curious to know what they actually are!)

A steep uphill slowed us down a bit, but at the top we were able to turn off down a dryer track through open forest toward Echo Bluff. We came to a nice rocky outcrop, near the end, where we stopped for lunch.

Once finished eating we explored the last of the ridge, downhill to some impressive views into the small gorge. The casuarina needles made the rock a bit more slippery, making me a bit more nervous with the kids, but they convinced us to explore down a final steep section to a small overhang where someone had left a little collection of firewood.

We had some cooee lessons before returning to our lunch spot. The kids decided to explore some interesting overhangs, as well as demonstrating their bouldering skills, before a look at the time had us moving on.

It wasn’t long before we passed the shortcut track back down into the valley, then reached a gully which contained the clear sound of a waterfall.

At a small lookout we realised we were looking back down towards our second waterfall of the day, while ahead we could see a very distinctive cascade spilling down bright orange rock. This turned out to be Fairy Falls, which the track took us directly below.

Again, on a warm day, this would be a wonderful spot to cool off, and even in the wet, chilly conditions I had to call back the older two kids from getting too close to the flow.

Moments later we came to an intersection, and when I went to continue to the right Dyson bailed me up, asking if that wasn’t the way we’d already been in the morning. Sure enough he was right — the nine year old had nailed the navigation — and we turned the other way and headed for home.

We made it back to the station just after 2pm, bidding Terence goodbye while I calmed Amani down after he discovered one of his socks was blood-soaked thanks to a very fat leech.

The weather might not have been ideal, but the walk was still very enjoyable. Walking in wet conditions actually made some things better, with the greens so much more lush and vivid, while things like tree bark and rocks had their colour really brought out by the conditions. That said, it’s definitely an area to return to on a warmer day when all that water could be more fully enjoyed.