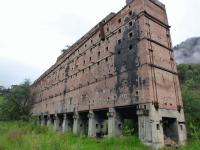 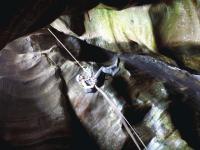 It was about 4am as we drove into Glen Davis, pulling up at the campground in town and throwing down our sleeping bags under the verandah for a few hours of much needed sleep before a big weekend of canyoning. About dawn we were joined by a healthy swarm of mosquitoes who seemed determined to drive us from our slumber.

Adrian and Deanpaul were already here — enjoying a much more civilised night in tents — while Todd pulled up a short time later having done a similar mid-night run out to the oil shale mining ghost town that would be our base for a couple days of canyoning in an impressive wilderness area. Kosta had unfortunately had to pike, realising there was no way he’d be able to get everything in order for O-Week if he joined us.

Glen Davis is the next access point to the canyons north of Newnes, and the slightly greater distance seems to keep many of the crowds away. Like Newnes it has many impressive canyons nearby, but is also a gateway to the remote Northern Wollemi canyons around Coorongooba Creek.

I’d been inspired to organise the trip after being contacted by Deanpaul, from Utah, who was coming to Australia and New Zealand for three weeks of canyoning to celebrate his 40th birthday. He was particularly excited by our Coorongooba trip in January, and had been hoping to find someone to take him into this area. I didn’t have time for a similar length trip, but I decided a few days at Glen Davis would at least give him a glimpse of some of the impressive rarely visited canyons we have.

So with impressive blue skies we set off, driving a couple kilometres out of town. We were forced to park just before the causeway across the Capertee River, with the recent rains making it just too high to risk in our cars. Unfortunately that meant wet, muddy feet from the start of our walk.

After a couple kilometres we crossed the river again, following the end of Coorongooba Creek for a short way before heading up to the cliffs. We were looking for a pass which I thought followed a small creek. Unfortunately I was wrong, so we did several extensive zig zags before being stopped by cliffs. Eventually we followed a ledge for several hundred metres before we managed to find a relatively easy pass winding up through the towering cliffs.

From near the top we got great views back over Glen Davis, and up the Coorongooba, where we could see an impressive canyon coming in. One for another trip!

Once on top it was easy walking through light scrub. Then as the ridge reached a high point it all changed. The tough, almost impenetrable scrub continued for some time, really slowing us down. Deeps, I fear, was less than impressed by his introduction to the joys of off-track walking in australia!

We finally dropped down a ridge towards our creek, abseiling down a large overhang directly into the creek bed. We were all rather tired and hungry — it was 2pm — so we stopped for lunch beside a very pretty waterfall.

With time working against us we set off downstream. There were several abseils, some quiet pretty, but the upper section of creek definitely wasn’t canyon. For one of them we rigged off a large tree high on one bank, only to discover a bull ant nest beside it as we began to use it. After a couple painful bites the rest of us moved very quickly!

After this interesting upper creek section there was a really long section of scrubby walking. Deeps graded the canyon a “C”, for creek. With all the vines that were catching us up and slowing progress a few of us muttered that the grade probably stood for something else.

Finally we reached an abseil where the creek dropped into an impressive canyon section. It wasn’t particularly narrow, but it carved a deep slot through the cliffs with abseil after abseil. With all the recent rain the waterfalls were pumping, absolutely pummelling us on a few of the drops.

On the way down we came across a small pothole, which thankfully we could climb out of, but it was kind of embarrassing given my advice to Deeps when he was packing his gear was that he’d “never” have to worry about potholes in the Blue Mountains.

After an impressive drop into a large cavernous area we started off down the boulder chute, thinking we were at the end. Unfortunately the canyon gods thought differently, quickly bringing us to a final massive drop that looked too long for our ropes. We decided to play it safe, given the time and the fact no one was keen on having to prusik back up, walking along a ledge for a couple hundred metres before finding a tree to abseil a shorter distance off. Once again we discovered an ants nest, and again after rigging the rope!

From here it was a scrubby bash down the slope, but eventually we hit the river to much relief. A short way up the other side we were on an old fire trail so could just cruise the final five kilometres back to the cars.

It was dark before we got back, and the energy levels were very low, which only added to the excitement when we hit the river crossing.

Back at camp everyone was pretty tired, although the mood improved when Todd pulled out an esky of beers. We had a fairly quiet night around the fire (or at least that’s how it seemed to me as I dozed on and off in my car).

Todd decided his feet couldn’t handle much more after the big day, so hit the road for home. It ended up taking much longer than the three hours it should, as a brief pause for a nap on the side of the Castlereigh Highway lasted several hours. He was eventually woken by a police officer who’d seen the car pulled off on the side of the road and wanted to check everything was okay.

Overnight the rest of us had some rain, and the weather didn’t look much better when we awoke. Deeps decided he was physically spent after a week of canyoning, so headed to Lithgow for a rest day, while the rest of us decided to do the shortest of the nearby canyons.

This time the river looked slightly lower, and given how much I’d been knocked about by the big day on Saturday I was willing to push my car a bit harder, so we drove across and headed out to the Coorongooba Camp Ground.

There was a light sprinkle of rain as we crossed the river, which was ominous, but we pressed on regardless. Up the ridge we went, hitting the cliff-line in no time. Our original plan was to use the same pass we found the day before, but after finding a fixed line hanging down a small climb we realised we were at the base of the climbing pass Todd had mentioned that runs parallel to our previous ascent. Given we had a shorter day ahead of us we figured we might as well mix things up.

Of course this decision convinced Huey to send down some more rain, which seemed to coincide in intensity with the difficulty of the climb facing us.

Thankfully we had Bjorn and Emma to free-climb each ascent, regardless of the difficulty or huge exposure, so Adrian and I could enjoy the safety of a top belay. It was here that I was most happy that my new 5.10 canyoning shoes had climbing rubber on the soles, which made a big difference.

A final long ramp led us up to the ridge top. While we could have sidled around to the impressive lower section of the canyon we decided instead to push back along the ridge from yesterday (only the non-scrubby section) and make sure we checked out the upper section of the creek.

We were pushing down the slope in quick time, but when we spotted a small overhang out of the rain we decided maybe lunch was in order. Given our late start it made sense.

From here we managed to zig zag down the slope, with just one small abseil into the creek. While not canyon, the upper sections of this creek are well worth visiting. There were several impressive abseils, stunning lush green moss and ferns, nice little waterfalls and impressive cliff walls.

Eventually scrambled past a large boulder only to discover the ground had given way, with a deep, dark, winding slot carved through the sandstone in front of us. There was a little bit of pfaffing about as we ensured a good pull down, then it was into the unknown.

This canyon isn’t very long, but it is incredibly impressive. While normally dry, the wet weather meant we instead abseiled down a waterfall into a dark cavern which required a short swim. The canyon formation in here was mind blowing.

Around the corner it opened out a bit, offering us our first glimpse of the valley below. From the top of the drop only two words came to mind… f**k me! It looked far too long for our ropes, but there was no other option.

I went down first, with a little trepidation, but as soon as I was free-hanging I could see the ropes made it. Phew! From that point on it was pure enjoyment. This is one of the most spectacular abseils I’ve ever done.

At the bottom another little windy canyon section took us to the third and final massive abseil. Again it looked too far for the ropes, so I tied a knot in the end, but again they were perfect. This drop had us pop right out the side of the mighty cliffs through a narrow slot before descending a massive overhang. I’m certain the waterfall made it even more impressive than usual.

We decided to avoid the boulder chute, instead heading right and following a spur back down to the river. It was much easier going than the day before, and knowing the car was directly opposite made it even better.

With plenty of time up our sleeves we decided to explore the old industrial ruins. While the mining at Glen Davis was shortly lived and less impressive than the facilities at Newnes, it was more recent, so more of the structures above ground remain. We marvelled at the amazing brickwork of the tall, narrow main building. Despite the fallen bricks and warning signs we couldn’t resist a peak inside, marvelling at the complexity of the refractory brickwork.

Some building had crumbled to just a concrete skeleton, while others had not only brick but also shards of glass still in the windows. Despite being abandoned for less than 60 years, nature had clearly taken hold, taking over the buildings inside and out.

Finally we headed back to the car and into town. Given the shorter day our energy levels were higher, so there was plenty of merriment. (A little too much perhaps).

By morning my hangover, combined with a second night of sleeping in the car because I was too tired (or drunk) to set up a tent meant I was not feeling up to either of the big canyoning days we could do. Thankfully the weather was still crap, so the others didn’t complain.

In the end we bid Deeps adieu and set off for Mt Wilson, but that didn’t mean the end of the canyoning fun… in fact, we ended up having a most enjoyable day in Why Don’t We Do It In The Road (Serendipity) Canyon, seeing it as none of us had seen it before!