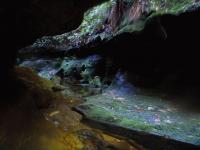 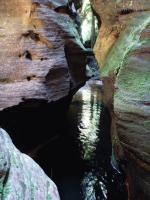 This summer has been such a washout that I’ve pretty much resorted to planning day trips with just a couple days notice when the weather forecast looks promising enough. This trip actually took that to the extreme, with the decision just a day before, but it paid off wonderfully when we woke up to a stunning sunny day.

The three of us met up at Penrith Station before setting off up the mountains. Once we escaped the weekday traffic, things got much nicer, and Diego got to see the spectacular views over the Grose Valley from Bells Line of Road for the first time.

We found the turnoff towards Koombandah Canyon (I have never actually noticed this dirt track at Bell, and had to hit the breaks hard then reverse 10m on the verge) before driving for a couple kilometres and finding a wide spot where we could safely park.

As we walked across a hill we were rewarded with expansive views of the farmland to the west — not something you normally see on a canyoning trip — before dropping down into a gully that would lead us to the canyon.

This part was probably the toughest of the trip, as we hit an area of swamp filled with cutting grass that really slowed the pace.

Soon we were down in the creek, which was stunning. It was so lush, green and prehistoric that it felt like you might stumble upon a dinosaur around the next bend.

The creek was flowing beautifully — like most at the moment following all the rain — and I was hopeful for some impressive looking abseils.

Then suddenly it was dry, and I mean bone dry. My first thought was it had dropped under the sand and we were about to hit the canyon section, but when it continued for a couple hundred metres I really started to wonder what was going on. Even when water started reappearing there was just a tiny trickle.

My conclusion by the end was that there must have been some fracture in the rock caused by the old coal mine and the creek was disappearing into it. (If anyone knows the real story, I’d love to hear an explanation).

Soon after, we were at the short but spectacular canyon section. We abseiled a short drop before we were forced into the first cold swim. Diego summed it up well when he said it felt like we had descended into the dermis of the earth.

Astley volunteered to make the tricky scramble up one wall to the tree above, with his repayment being a longer and more impressive abseil.

We all paused to hang in the dark chamber — the darkest part of this slot — snapping a few photos as we slowly spun around.

After another little swim we paused to enjoy a shaft of sunlight that was slicing through the cliffs.

Soon after came the last drop, and we used a sling to lower ourselves down before jumping into the final icy pool.

Below the canyon section the creek had even more of a ‘Jurassic Park’ feel, with Diego doing his best velociraptor impersonation.

We briefly explored little side streams, with the second the most impressive. A massive waterfall tumbled down the huge cliffs above into a little dell surrounded by huge boulders.

The creek walking was slowed by a fair amount of fallen timber from the big storm last winter, but before too long we could see the old bridge ahead from the former coal mine. I went to the right, which backfired when I hit a clump of lawyer vine, while Astley and Diego picked the better bank and had an easy time of it.

We took some time to explore the remains of the old mine, trying to look in the old shaft and marvelling over their love of concrete. (Not only had the miners covered a huge area of land with the stuff, they’d even concreted the creek as it passed by!)

From here it was a simple task to walk out the old road. It was clear that it still gets some occasional (probably illegal) use, although a large section of recent erosion looks set to end that, with a major crack in the road hinting that it could give way very soon.

As we got higher there were some impressive views over the upper Grose.

Towards the end we followed the old railway line, through a cutting that is apparently undergoing rehabilitation, past some dams and other remnants of the mine to the main railway line. From here it was a simple walk back along the railway service road to where we’d parked.

The drive back down the mountains was slowed a little by school zones and traffic, but I made it just in time to drop they guys off and head to work. It still blows me away that we have so many wonderful spots to visit so close to Sydney that I can even manage good trips on a work day!