Xmas and NYE in the Kosciuszko NP 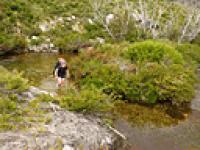 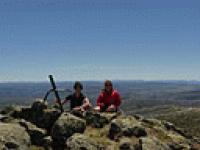 TRIP REPORT: Xmas and NYE in the Kosciuszko NP

Party: Mary Merlo and Lisa Jonas (and a short appearance of our friend Joe from Camden)

Short version for those of you not keen to read long stories: We left Sydney on the 22nd of December, we spent 10 days down the Kosi doing 2 multidays walks and a half day walk and we survived: nasty weather with heaps of rain, cold, wind and 2 super nasty hail storms, a couple of interesting off track sections (were we really meant to go that way?!?!), an “interesting” conversation with a wild pig hunter, deadly smelly self-walking socks (mine), a pair of crappy new model volleys – what a failure, nasty scrub (our legs still thank us for that), a sunburn, 3 brown snakes, heaps of annoying march flies and aggressive ants, tropical temperatures in Derschkos hut, and NYE with only ONE glass of wine each and half bottle of port to be shared among 3 (bloody Joe didn’t bring a thing!!!!) The good bits: absolutely stunning country, and that was worth all the above.

If you want to know more about it, keep on reading (I’ll try to keep it short!)

I had always wanted to spend a few days down the alpine area but, a part for a ski excursion and a short trip in the very north part of the NP, never got to do it, so this Xmas break seemed to me the right time to give it a go. Problem was that I had no idea where to go…mmhh… SUBW was the answer: why not going to the Xmas dinner walk bringing the whole lot of the Kosi maps and ask some of the experienced members for some help?! Good call Mary: after a few drinks ‘n’ swims down the Cox, the trip was successfully planned – thank you guys 😉

Despite some interest from other members of the club, in the end only 2 European adventurers took part in the trip: myself (the Italian) and Lisa (the German). We set off in the early morning on the 22nd of December and in no time we were down the snowy – just kidding, it took us forever to drive down there! We thought it was good idea to register our intended trip at the Jindabyne NP office, you know after all we were not all that experienced with maps and compass and navigating with the sun doesn’t quite work when you come from the other side of the globe! The first part of the trip was meant to be a 4-5 (lazy) days walk starting from Guthega and heading towards the main range track, the lakes area, Mt Kosciuszko and all that, so off we went down to the island bend near Guthega where we camped for the night. We were welcomed by plenty of rain. In the evening we were entertained by a feral pig hunter with such poor memory that he asked us where we were heading the next day about 5 times. We reckon it had something to do with too much alcohol.

The next morning we set off for the walk in a stunning sunny day and soon after leaving the carpark we walked on the suspension bridge across the snowy river. From there it was time for the first off track section up to Mt Twynam so we had the pleasure to meet the famous Kosi scrub – if you’ve been down there you know what I’m talking about, naaaasty stuff! We enjoyed every single bit of the walk among beautiful snowgums, creeks, flowers and even patches of snow (and the nasty scrub, of course!). Everything was going fine, having a relaxed walk down to the blue lake until … the sky turned black, the first drops of rain hit us, thunder and lightning appeared in the sky, in NO TIME the storm was above us. We just managed to build up a shelter with a couple of rocks and my fly tent when hail pea-size hit us. It went on for ages, it was cold, it bloody hurt the knuckle of our hands, it was not nice. But we survived 🙂 We camped at Charlotte pass for the night.

The next day was the photocopy of the first one: stunning sunny day, even more beautiful snowgums, awesome views and flowers, heaps of tourists on Mt Kosciuszko (oh sorry, that was the bad bit of it), all going fine until the daily afternoon storm came AGAIN!! This time the nasty thing caught us in the worst place you could ever think of. That Joe friend of us suggested a “beautiful camp spot” just on the other side of the great dividing range, what a great idea… if you’ve ever been down there you might know that “the other side” is not easy stuff, even less when you’ve got a bloody black nasty storm quickly approaching! So there we were, trying to beat the storm walking as fast as possible down the gully between Mt Townsend and Abbott peak but man…that was not walking, it was a nightmare: rock hopping (avoiding the first of 3 brown snakes I almost stepped on in this trip), water from the patches of snow running everywhere, holes in the ground where you didn’t expect them and super nasty scrub slowed us down so much that when the storm hit us we were still half way down the bloody thing. We had no choice but finding a shelter, quickly. I couldn’t believe it when Lisa pointed at the only overhang rock of the entire alpine area: we reached it just in time, the storm came and it was awful, I had never seen such a thing before in my life: the hell came down the sky, wind was blowing from all directions, it rained cats and dogs, thunders seemed to be right above us, and then the hail came again, buckets of it. It went on for more than 2 hours, my body temperature was dropping down quickly, a decision had to be made: spending the night right there didn’t look like an option, keep going down didn’t look good either, going back up and camp in the open saddle wasn’t promising at all given our too small tents (you really need to have the right gear for this kind of trip!), so what to do? This is when Lisa came up with the best idea of the entire trip: how about going back to Seamans hut where we can have a good shelter and maybe some fire to warm us up? Good call Lisa! It was 9pm when, under a steady rain, we got to the hut where there was a German family finding shelter from the unexpected storm. Do Europeans underestimate Aussie weather conditions?!? We certainly did. Anyway, they gave us the warmest welcome: the fire was going and they went on singing Xmas songs (in German- Lisa almost got homesick!) while we were having our well deserved dinner! What an awesome Xmas eve 🙂

The next morning we woke up super early and our only thought was “let’s get off this mountain before the storm hits us again this afternoon!” as we were sure it would have happened again. It was a long but pleasant walk back to the car in Guthega, just in time for the first drop of rain – and I’m not kidding you!

We took a couple of rest days waiting for the weather to settle down, we bludged in Thredbo for a day enjoying cold beers and dips & biscuits and then drove to Geehi flats for a short tour of some historic huts of the area (strongly NOT recommended as the area is packed with 4WD campers, so much traffic!)

The 28th we finally set off for the second part of the walk: Round Mt hut -O’Keefes hut – Mt Jagungal – Valentine Hut- Derschkos hut and back via Round Mt fire trail. In this part of the NP the vegetation and the wildlife are very different from the lakes area, with more trees, big variety of flowers and heaps of annoying march flies – what-a-nightmare!!! On this walk we hopped from hut to hut which turned out to be a great call as we met quite a few people and interesting conversations would arise under the shelter of the hut while sipping wine and port. The second day we climbed the big J via Bogong creek and Jagungal saddle in the most beautiful sunny day you could think of, the view up there was absolutely terrific. It’s a shame it’s not the highest Australian peak as it’s heaps nicer than Mt Kosciuszko. On the 3rd day we met our friend Joe who had been chasing us for 2 days! We went to Valentine hut via a no longer existing track which made us crossing the river millions of times. The bit next to Valentine falls was like walking through a jungle, in typical SUBW style! What a lovely hut it is although it makes you feel fat every step you take! We enjoyed a nice dinner in the hut and were very pleased to have our friend Joe with us until we found out he hadn’t brought any wine or port, nothing whatsoever: he was no longer our friend and we kind of regretted taking him on board with us!! The next day we headed back to spend NYE at Derschkos hut and thought it was a good idea to have some fire going, just for that one night. What a great idea Mary… that stove was shocking: in no time and with very little wood the hut reached tropical temperatures inside, we tried to spread to the far corners of the hut in the attempt to escape the heat (opening the door wasn’t a good idea as millions of march flies and mozzies would come in), in the end shorts and swimmers popped out of our packs along with the last bit of wine and port (just to warm us up even more!!). We were waiting for the 9pm fireworks but they must had been cancelled as it didn’t happen; we had to wait for the midnight ones then, so more coffee was made and more bullshit talked – a good combination of feral pig hunter stories and my smelly self-walking socks threats, can’t be reported here!

The next day we were welcomed into the new year by a beautiful sunny morning –which caused me a sunburn, right on the last day… Had breakfast on a couple of rocks just up the hill with an awesome Mt J and misty valley view – what a great start for this 2012! By lunchtime we were back at the cars and from there it was a looooong drive back to Sydney.

I know I said I would have kept it short, but it was such a beautiful trip that I could go on talking about it forever! I would recommend it to anyone who wants to spend a few days out bush! Thanks to Lisa for coming along and to all the guys that helped me plan this trip on the Xmas dinner!