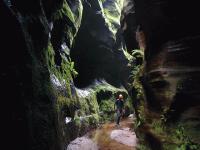 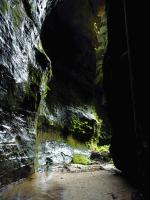 After a long winter break from proper wet canyons I was itching for a good hard trip through some spectacular slots to blow the cobwebs out of the system.

We decided on an ambitious double — Heart Attack and Surefire Canyons — which while physically next to each other meant we’d have a long, hard day ahead of us, with plenty of walking and a requirement for some reasonable route-finding.

At first it was going to be just the three of us, but we ended up deciding to open it up to Suboir. I was quickly swamped with interest, turning a few people away after it reached the worryingly large size of six within about an hour.

With some spectacularly warm weather promised, we started our trip out on Saturday night, amazingly getting Barcoo Swamp to ourselves when we arrived in the late evening after a CityRail debacle meant Kosta spent two-and-a-half hours on several different trains to try and complete a 50 minute journey!

It wasn’t the only chaos that day, with Nigel cryptically dropping out and Cat and Jiri bailing following a setback with a recently reconstructed knee. It was too late for the two who’d been knocked back from the trip to join us, so it returned to the original three.

After a stunning night under a clear starry sky (preceded by a few beers around the camp fire of course) we were up early, driving out to the locked gate which we reached right on 7am. Some quick packing and we were on the old fire trail, moving at an impressive pace.

We made it into the creek above Heart Attack Canyon without trouble, ignoring some slings on a tree and finding an easy scramble down a short distance away. From here things slowed down, with thick scrub slowing progress. After a bloody long walk I vowed to take a shorter route in next time!

There were a few little bits where the creek seemed to promise to go canyon soon, only to offer more disappointment, before we finally got to the spectacular chasm capped with a large chock-stone that this canyon is known for.

The abseil in is amazing, with a stunning waterfall cutting into the deep, winding constriction. It’s certainly a good one to get the heart pumping for the day ahead.

There was some great formation, and some fun hand-over-hand’s and abseils, including a very awkward one from an apparently recently-fallen tree where we cut off some old slings that were now hanging in the middle of nowhere.

We climbed out the easy exit gully, pausing under an overhang for a quick lunch, before making the final push to the tops.

The next bit was a little tricky. We weren’t completely certain where we needed to drop in to Surefire, and were a little paranoid about missing some canyon, so we walked a couple hundred metres along the ridge before beginning our walk in. In hindsight it was unnecessary and cost us time, but it was still spectacular looking down as the gorge opened up before us.

It took about 15 minutes to find a way through the cliff line — with the drop just long enough that we weren’t sure our ropes would reach — but T1 eventually spotted a gully that went down a crack, so with a little bit of chimneying (and a narrow squeeze at the bottom) we were soon through.

The creek above Surefire was prettier and easier walking, with much less scrub, so we didn’t complain about the extra distance we had to cover.

An easy abseil had us in the canyon proper. From this point on only one word described it: Wow!

Surefire Canyon was magnificent. Long, dark, narrow, wet, mossy. There were straight sections, along faults, then windy bits where it seems to disappear through the side walls.

Unfortunately we couldn’t fully enjoy it, with the stinking hot weather that we’d enjoyed so far leading to a thunderstorm which began dropping rain not long after we entered the constriction. It meant the temperature plunged, the light died and made our journey a little more nerve-wracking.

By the time we got to the log-jam abseiling it was almost pitch black, making rigging a little awkward and leaving T1 to nearly tumble backwards down a hole.

We walked past the exit canyon, enjoying a few hundred metres of good canyon as well as the huge overhang at the end which forms an amazing natural amphitheatre. It would be a great spot for a wedding, if you happen to have VERY fit friends and family.

A short back-track and we were going up the exit canyon, which is also quite pretty, although loose sand, rocks and logs did threaten to swallow you up if you put a foot wrong.

After a long day the awkward scrambles up were a bit hard on the muscles, and trusting the fixed sling up a very wet, slippery and muddy slab wasn’t great, but we were soon at the base of the cliffs which made walking nice and easy again.

This exit is quite amazing, with the creek rising up to the very base of the cliffs for a weird little swampy section before again dropping into pleasant creek.

We made it to the fire trail just before sunset, with the glowing red horizon keeping us company as we powered along the track.

The road bash back is very long, and the legs were tired, but the bush was stunning, and the wild flowers impressive, even in the twilight.

I think it was about 9pm when we finally got back to the car, with our stash of water, food and dry clothes most welcome.

Unfortunately T1 had a bit much of the first two, with the intensity of the day catching up with him and putting his body in a state of shock reminiscent of what I suffered a couple months ago after the Wilf Hilder memorial.

After a few kilometres he pulled the car over, jumped out, desperately fighting the urge to vomit.

After that he wisely asked me to drive. (Well, maybe not wisely if you’ve seen me drive). It was the slowest journey I’ve even had back to Zig Zag. Every few minutes it seemed we had to stop again so a very green T1 could leap out.

Finally, at the RTA weighing station at Bell, T1 managed to purge, leaving a most unpleasant gift for the truckies in the morning.

Thankfully he felt much better after that, even falling asleep, so we made good time to North Richmond where I’d stashed my car, before meeting up for a quick Maccas stop.

Back at Penrith Kosta made the last train to the city, which thankfully ran on time.

I’m not sure any of us could walk properly the next day, but we all had beaming smiles considering the spectacular canyons we’d done.

Surefire outdid all expectations, leaping into my top five of all time.