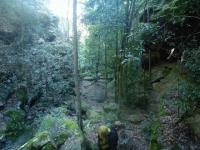 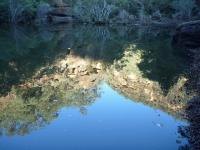 When you think about the ways a canyoning trip can go horribly wrong, your mind normally goes to things like thunderstorms, snake bites, rock falls or rope jams. But for all those potential disasters, there is at least the pay-off that you still get to do the canyon. Unfortunately, on this trip that wasn’t the case.

We should have known we were destined for failure long before we set off. Despite agreeing on a maximum group size of six, there were 10 people signed up just a day out, and it was only thanks to a bout of illness (Stacey) and a midnight text from Sierra (who wisely figured a few days of insomnia, working until 2am, then setting off just after 3am due to track works wasn’t smart) that we got down to eight.

T1′s beginner trip through Coachwood Canyon the day before had already set the tone, with a late start, inexperienced group and need for early finish forcing them to bail halfway through the canyon. Then after a pleasant camp at Wheeny Creek (where Nigel and Pete had joined up) the next part of the chaos occurred when Nigel was left behind as the convoy raced along the dirt roads.

Stephen, Mary and I had managed a flawless meet-up in Penrith and flown up to the Culoul Range Firetrail by 7.20am to wait for the others. The rest of the group arrived five minutes later, but unfortunately minus Nigel. And with each minute that passed his disappearance became more worrying.

After some failed attempted phone calls and texts, T1 and Tracey raced back along the Putty Rd to do a quick search. Forty minutes later they were back, still without Nigel. At that point we figured there was no hope, with more than a couple joking references to Nigel’s previous navigational issues.

Just as we saddled up and began to drive down the fire train Nigel roared up behind us — looking rather unhappy — just in time to grab his gear and hop into one of the cars. The fire trail was very enjoyable, and other than some very slippery mud sections towards the end it was in good condition. Although despite leaving the 2wd’s behind, no one wanted to slow down too much for these muddy sections as you could easily get bogged.

We arrived at the locked gate about an hour late, yet despite this T1 still managed to pfaff about reorganising his car while Nigel pulled some breakfast out. We set off, still with little urgency, carrying a couple hundred metres of rope with the plan that we would make up time by leapfrogging through the canyon.

Now normally I’d have glanced at the maps and have an idea where we were going, but I’d only started packing at 11.30pm the night before, so hadn’t even thrown a map in. T1 seemed confident, despite a worrying reference to someone else’s advice to drop north into the creek being wrong (it wasn’t!). So like sheep we blindly left the navigation to him.

Before long a large creek was forming to the south, so we picked a nice ridge and made our way down. The upper sections had some nice creek walking, with occasional short, scrubby, lawyer viney mess, with just enough in the way of a foot pad to convince us we were on the right track.

It was around here that T1 lost his camera (for the third time in six months). I informed everyone of the result of finding a lost camera on a FCC trip, and sure enough, no one wanted to help look (except Pete, interestingly enough!). T1 eventually gave up and we continued.

As we walked on, the creek began to drop through boulders, with some rather nice mossy sections. Suddenly we could see large cliffs ahead of us, a little too large for another creek, and the first thought that we were in the wrong creek set in.

Sure enough, a quick scramble down a waterfall had as close enough to confirm that this was definitely the Colo River. Whoops. Who stole Wounded Knee Canyon?

Pete and T1 huddled over the map while the rest of us enjoyed the impressive views, eventually realising that we were indeed too far south. It turned out we’d done Pass 6, which I can recommend as a lovely bushwalk into the Colo.

For the last scramble down some over-zealous person has decided to carve out a series of hand holds. They unfortunately scar the rock quite badly and really take away the feeling of remoteness, solitude and exploration that you should get in this area.

Once at the bottom the next challenge was crossing the river, which while lower than a few weeks earlier still had much higher water than usual. After much deliberation Pete and Tracey swam across, with Tracey’s order to “toughen up princesses” enough to inspire the rest of us into the cold water.

On the other side there was some sunlight to warm us up, slightly, so we paused to enjoy it for a moment before setting off upstream. The river walking was fairly easy, even if the recent heavy rains meant there weren’t many sandbars left in place.

After a while a familiar looking section came into view. Sure enough, a deep slot was carved down the middle of it. This was our canyon, plunging into the Colo about 2kms upstream of where we came in. It is a stunning spot, and would have to be one of the more impressive final abseils from a canyon.

Not long after we were at the junction of Wollemi Creek, which was also flowing well. We paused for lunch in a nice sunny spot, but the low winter sun meant that by the time we were half way through long shadows were threatening our position. With that we abandoned our plans for a swim and moved on upstream.

Foolishly we stayed on the eastern side, where we had to fight through boulders and bush, without realising a perfectly formed footpad was directly opposite. Eventually we came to an impressive log which spanned the whole creek, providing a dry route across.

The only downsides was that the log was quite worn in places, developed some intense vibrations as you walked on it, and required an awkward manoeuvre to pass a boulder. Thanks to this, the girls stayed on one side (yes, I’m including T1 and Nigel), while the rest of us picked up the lovely footpad and wandered on blissfully.

‘The girls’, being stuck on the rugged side, were forced to scramble up the precarious cliffs towards Pass 1, while we enjoyed a stunning camp cave, nice pools and beaches, a quick wade and a relatively easy track up the ridge. The only downside to this pass is the fact that the cairn fairy had been hard at work, placing little piles of rocks every metre or two in some places.

About half way up we realised we were ahead of ‘the girls’, so paused to admire the huge horseshoe bend in Wollemi Creek and the junction with the Colo. Together once more we continued up the pass, through a few final scrambles, to the tops.

A five minute detour led to Crawford’s Lookout, which is easily one of the best views anywhere in the Blue Mountains, so we enjoyed a well earn’t break as the last of the sun’s rays illuminated the towering cliffs of the Colo Gorge.

Despite being quite flat, we were all fairly tired, so the walk back to the cars was done at a less than cracking pace, with darkness descending completely just as we arrived.

From here we said goodbye to Pete (although he was spotted at the truck stop at Colo Heights hoeing into an ice-cream a short time later) and made for the Macquarie Arms in Windsor where some well-deserved and very hearty meals were ordered, and washed down with some pleasant amber fluids.

But the story doesn’t end there. Three days later T1 was back, on his own, and managed to find his lost camera. Best of all it was not only still working, but had plenty of battery for the canyons he was planning to do the next day on the western side of the Newnes Plateau.

But to complete T1′s run of canyoning bad luck, that night was the night of the wind storm that flattened Blackheath and Mt Wilson, crushed a train and left more than 30,000 people without power. So after being trapped by fallen trees on Bells Line, and nearly being trapped in the state forest, he and Adrian wisely aborted, camping near The Lost City.

On the plus side, if bad luck comes in threes, T1′s next canyon should be a cracker!