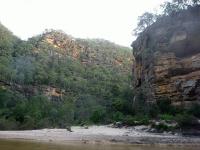 I’d spent more than a month trying to find out what Michelle wanted to do for her birthday, so when she eventually asked for an easy overnight bushwalk I figured it was finally my chance to head into the Colo River.

For some reason I’ve just never made time to explore this incredible rugged gorge, despite having a long-running plan to lilo the river. While there are plenty of passes and interesting spots, there were really only two that would fit the ‘easy’ request, so I chose the slightly more challenging of the two: Canoe Creek.

I’d planned for a lazy start, but when a couple people missed their train and Sky got navigationally challenged (her and Beth made it to Clarendon Station before realising not only had they made a wrong turn, but iPhones have maps!) the rest of us had another half an hour to kill. Thankfully the weather was a vast improvement on the cold, windy and wet week running up to the trip.

Smoke on the water… or at least mist on the Colo
We dumped Sky’s car with its low profile tires and set off up the Putty Road, finding the the Grassy Hill Fire Trail without much difficulty (bar the illegal u-turn). After 100m Angie bailed with her little 2wd, so we planned to shuffle everyone in my car. Not too far back along the trail I found Chee had decided to chance it, gingerly driving down some of the more severe ruts in his car.

There were plenty of burnt patches from a recent hazard reduction, but it was all green by the locked gate and there was thankfully no burnt areas on our actual walk, although some spots could be seen on the nearby ridges. Once on foot we raced along the old logging road, reaching the track surprisingly quickly.

The walk from here is spectacular, with open woodlands turning to rainforest as the track zigzags steeply down the rocky slope. There were a few awkward spots, but it was mostly easy, and some lovely orchids, ferns and mossy areas made it very pleasant. In less than an hour we were in Canoe Creek, which meandered down between boulders before making its final plunge over a waterfall towards the Colo.

Towering cliffs line the Colo River for most of its length
We paused at the lookout to survey the stunning views along the river then made our final descent to the flats below where we would camp. On our right I spotted a good looking cave but foolishly didn’t examine it, so it was only an hour later — after tents were up — that I realised how good a camp cave it was. No matter, we still ended up spending most of the night there anyway, avoiding the occasional rain showers and enjoying a lovely fire.

After lunch Michelle and Nikita decided to have a siesta while the rest of us went strolling a short distance along the river. The water was freezing, so there wasn’t much desire to go too far, but there was still plenty of fun to be had (dinosaur impersonations, penis shadows, etc). There was also an amazing mist that had settled just on top of the water upstream.

Back at camp we had a quick conversation with a group who’d come down from the Central Coast, before heading to our cave. Dinner was a little bit of a blur, but we ensured we covered off all the important topics of conversation, like male pubic grooming, while Angie also got to observe the impact of illicit substances for her degree and Sky suffered the embarrassment of a few classic stories (like the time she couldn’t check the time on her phone because “I don’t have reception”).

Enjoying the camp fire under a large, dry overhang
As the last of us were planning to finally crash the heavens opened, and after trying to wait it out for 15 minutes we finally made the dash to the tents in the rain.

The increasingly wet weather meant no one was keen to rise in the morning, so we all enjoyed a quality sleep in. When we eventually got up for brunch we packed and went back to our cave for some food / Scottish dancing / penguin impersonating before setting off a bit after midday.

We were expected to take much longer on the way out, due to the long, sustained climb, but ended up making surprisingly good time. There was plenty of sweat, mixed liberally with rain, so the breaks were only ever short as the dry cars beckoned to us.

All up it only took about 2 hours to get back, so we headed to Windsor to collect the cars then enjoyed an early pub-dinner and beer at the Macquarie Arms Hotel (supposedly Australia’s oldest pub) before heading for home where some sore muscles were nursed by a few of the group.