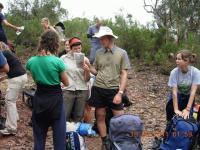 A cast of thousands. Bigger than Ben Hur. Well ok that might be an exaggeration but still, 22 people is a record for the SUBW navigation weekend, a fantastic turnout of new members considering the weather.

Heavy rain during Friday night deterred only a few and despite the many people, cars and coordination with the notorious NSW rail system, everyone appeared at Bell station more or less on time on Saturday morning. A fine drizzle and mountain mist made for damp conditions for spreading out maps, so we retreated to the dry comforts of Bell station to look at maps prior to setting off. Here the beginners learned about map reading and contour lines. Unfortunately I couldn’t translate what a spur and a ridge was into Italian for the benefit of the international cast of students present, but we made do with a few examples and I think everyone got it .

Once the theory was done with, we all filed off into the bush, hoping for the mist to lift by the time we reached the rocky summit of “994” so we could continue the navigation practise. The weather obliged, and by the time we got to “994” the clouds had lifted and we had a 360 degree panorama, perfect for compass work. Everyone took their lunch and their maps to the top and surprisingly there was plenty space for 22 people on this little rock platform. Everyone used their maps and compasses to identify the features around them.

Once again we set off, a long chain of people meandering their way down to the Wollangambe River. We crossed the river and pushed steeply up the opposite side through the dense wet scrub, just as the clouds lowered and brought once again the threat of rain. There is only one place in this wilderness where such a large group can be kept dry and comfortable on a wet weekend, especially when there aren’t enough tents to go round. So the task for the navigators was to find their way to this place, a huge cavern surrounded by amazing rock formations. We all set bearings and headed up a ridge, aiming to reach an intersection of two fire trails. On the way up, a family of little ringtail possums were spotted in a tree. They were awake in the broad daylight, moving among the branches, a mother with two baby possums clutching to her thick fur.

After a couple of kilometres of walking we reached the road we were aiming for an only 50m from the track junction, proof that the techniques we were using actually work! Then we set new bearings, and our task now was to work out how far along the track we should walk before turning off it to go to our campsite. With this done there was then some more scrub and a little swamp to cross, and then a short climb onto a low ridge. I startled a tigersnake that was trying to sun itself in the feeble warmth of this cloudy day, or rather, the snake startled me. Everyone except Samanta gave the rock the snake was hiding under a wide berth – Samanta just stood on top of it and wondered what all the fuss was about.

It began to drizzle as we collected some water and then we all made our way down a bumslide and into the long promised huge camp cave. This was an amazing amphitheatre and there was plenty of room in there for everyone to stay dry. The rain set in as we collected firewood, and soon a cheerful fire was going. A great evening was had with everyone congregated around the cooking fire, and it was well after midnight before the last of the group retired.

Next morning the late risers were woken by the call “heading off in 10 minutes!” An hour and a half later we were about ready to set off. It was still drizzling lightly so we set some bearings before heading out of the cave. We crossed another swamp and climbed to some high ground, and navigated on bearings down another ridge to the Wollangambe River.

The river was crossed easily, except for the scrub, and we then climbed the final ridge towards Bell. We came to a place of panoramic views, and there we recognised summit “994” where we had had our lunch the previous day. This was one last opportunity to do some compass work and determine our position once more. It was also the last opportunity to savour the sweeping views of the Wollangambe Wilderness before heading back to the cars.

A highly successful navigation weekend with a great group of people! Welcome to all the new SUBW members!