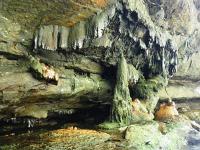 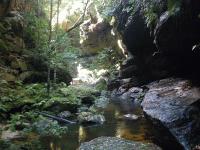 After a nice early start we set off through the scrub to find a way into our chosen canyon – Ashcroft Ravine. Our information was light in detail, but we managed to find a relatively straightforward scramble down into the gully.

Here, the creek proved less than straightforward, with lots of scrub, boulders, wades, and the occasional swim. However due to our early start, and steam rising off damp vegetation, the lighting was impressive.

Continuing on, we hit a brief but superb constricted section of canyon.

We had lunch shortly after reaching Wentworth Creek, and admired a series of impressive ironstone stalagmites and stalactites, quite unusual in a canyon!

We had been warned of the “rockclimbing” exit of 3 pitches, which turned out to be a short, scrubby, and reasonably simple scramble out of the exit gully, similar to that found in a number of other canyons.

We had an uneventful walk back to the car, reaching it just in time for the heavens to erupt with a downpour, capping off a good day in the bush.