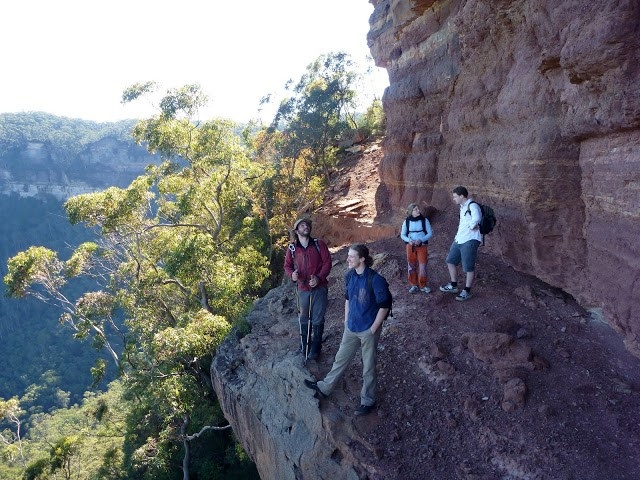 Despite a long-time desire to spend a bit of time knocking over the passes of Narrow Neck – which are steeped in more bushwalking history than just about anywhere else in Australia – my trips always seem to overlook the area and involve more remote locations. Determined to rectify this, and conscious that I only had time for a day trip and was still nursing an ankle weakened by a sprain on my trip to Pantoneys, I decided to organise a run through of a few good ones.

The plan, though rough, was to head out from Green Gully, up Carlons, down the recently rediscovered Harmil Ledge, back up Dunphys, then on to an area which I thought looked promisingly like the home of a yet undiscovered pass based on a previous trip a few years back.

After a slow start (thanks in part to an unnamed walker who managed to get lost on the way up the mountains and turned back without telling us), we set off on the brisk but clear morning. The trip up Carlons was clear cut. The lungs got a work out going up the steep but attractive open forested ridge to the first of four sets of chains. At the second set of chains, which hang precariously off a near sheer rock face above a rather small rock platform, Bjorn decided to demonstrate his climbing skills and free-climb the rock without use of the chains or spikes. The rest of us made it up without too much trouble, and we found the views getting better and better with each short climb until we reached the top.

We raced along the ridge to the fire tower, running into a NPWS ranger who laughed off our suggestion that he take us up the top for a tour. Then it was on to the fire trail for a short distance before slipping off to the right in search of the entrance to Harmil Ledge.

This pass, only rediscovered in the last few years, was surprisingly simple to find, with a beautiful little gully cutting through the upper cliff line and taking us to one of the nicest shale ledge traverses I’ve ever done.

At the nose Joshua decided to dice with death, stepping on a large flat rock that proceeded to break free and slip off the edge of a 30m cliff face. Despite natures attempted homicide, we decided it was a nice spot to stop and enjoy morning tea, admiring the views while cursing the sixties bureaucrats who decided that carving a gash through the Wild Dogs for a high tension power line was a good idea. 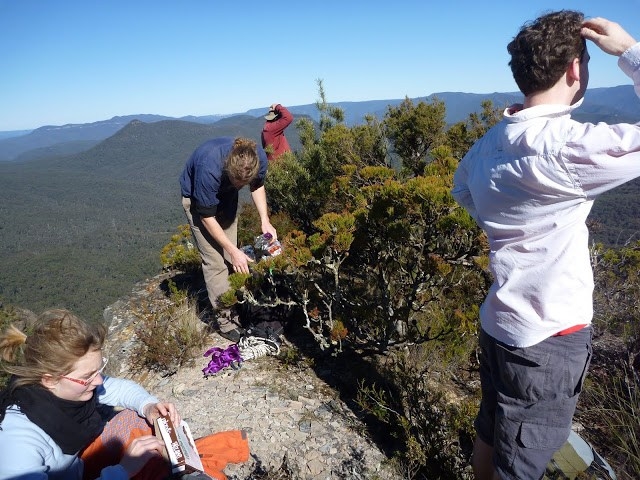 From here the navigation took a turn for the worse. For some reason I had the idea that we needed to follow a ledge east from here to hook up with Dunphys. After several attempts, each time making it several hundred metres before being halted by ledges that disappeared into an abyss, we realised we must need to head right to the base of the cliffs and go from there.

Given the time wasted, and the fact that I wanted to try and find my new pass, we pushed down through several small cliff lines and down the ridge to the fire trail. We walked north, stopping at a small creek for lunch and water, then continued on our hunt for my pass (which in my delusion I’d already named Rocky Wombat Folly. If it makes sense to you, you’ve clearly walked with us too much). I won’t be too specific as to the location, not wanting to ruin anyone else’s desire to explore the area. Needless to say, we push backed up to the cliff line, where we left Felix and Camille.

The remaining three pushed along the ledges, finding occasional areas where we could scramble up until we were at the last ledge below the towering cliffs. We followed this for some time, reaching two creeks whose waterfalls came in just metres above us. There were at least two spots that looked climbable, but even if we succeeded, they weren’t what could be called a pass in a true sense. That said, they were no worse than some of the rock faces that had chains or spikes installed many years ago. 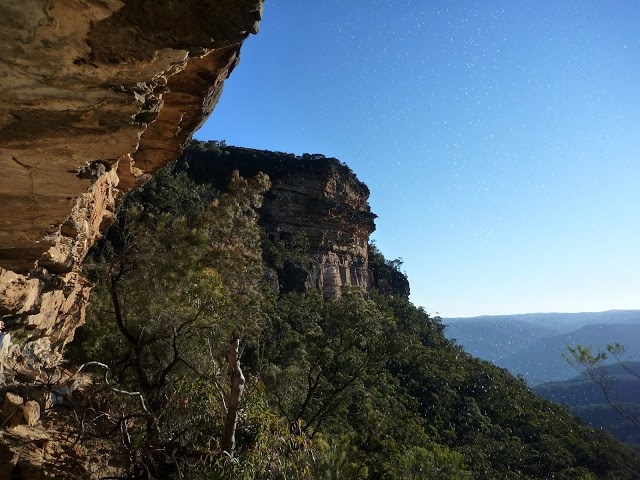 With daylight starting to run out we gave up, headed back to the others and pushed back to the cars. Joshua piked on grabbing a beer at the pub (possibly because he had lost a bet earlier in the day and owed me one), so the rest of us headed down the mountains for a drink and a quick feed.

The day may have been a failure on the hunt for a new pass, not to mention a failure to find an 80-year-old one, but it was a great reminder of just how much fun Narrow Neck is, how incredible the views are, and what a plethora of potential walks there are in the area.