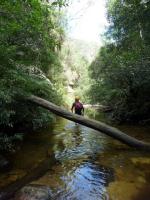 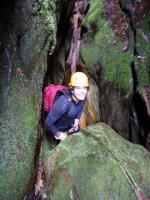 Even with the usual poor planning – a trip decided on less than a week out – a spanner managed to get thrown in the works when I came down with an appalling stomach bug on Friday night. After a rather unpleasant night, and a morning in bed, I finally made contact with T1 a couple hours before we were due to meet up to let him know that I was going to have to bail. After some convincing that I could at least spend a quiet day at the base camp if my belly didn’t come good I finally decided to push through and go ahead with the trip.

Even the quick job of packing – which was made pretty easy given my canyoning gear was still sprawled on the front verandah following three trips in the last fortnight – took it out of me, and I needed a half hour lie down before I could finish the simple task. When T1 and Kosta arrived I was still dubious about my chances of seeing much of the canyons, but I piled my gear in the car and we hit the road.

At North Richmond we stopped for a quick dinner, grabbing some big greasy burgers from the takeaway shop. Given it was the first solid food I’d had in over a day, it went down a treat, and miraculously proved to be just what I needed.

By the time we got to the car park it was just after 7, the light was fading, but I was feeling much better. Despite it being a long weekend, there were only two other cars there, which was good for us but a bit of a surprise.

We set off and made great time out the fire trail, with the plan being to find a little camp site at some point near the end of the road which we could use as a base camp, and that would be easy for Bruce to find when he walked in late Sunday night to join us.

Near the old car park we stumbled upon a group of about 15 young folks with a couple packs between them who told us they had planned to go for a walk “down to the river”. It turned out the two cars were theirs. They had left a few cars further back on the road with a good number riding out in the tray of a ute. We managed to let them get out of earshot before laughing too hard at their stupidity.

Near the end of the old fire trail we picked a nice spot to camp, and by about 9 we had the tent and fly up, firewood collected, bottle of wine open and were settled in nicely. Best of all the weather wasn’t too bad, and despite plenty of clouds the rain didn’t come down until we had gone to bed, and while fairly constant it never got too heavy.

The next morning I woke up just before dawn, feeling energetic and antsy to get moving. The belly was tip top, and for someone who is usually last to rise it was a nice change. The rain had stopped, the clouds thinned, and the day was looking promising. With a few bad attempts at singing (“Oh what a beautiful morning” etc), and some noisy breakfast preparation, Kosta and T1 gave up trying to sleep and got up too.

We were going by about 7.30, with the rather ambition plan of knocking over Bjelke’s Mind and Steep Creek (Bridge), which between them were going to require close to 20 abseils and a hell of a lot a walking. Navigation was made easy with a fairly clear foot pad following the ridge tops almost the whole way to Steep Creek. When we got there, we realised we were right up at the top of the creek, so decided to keep on going over the next ridge and do Bjelke’s Mind first, which we later discovered was a great move considering how scrubby, swampy and generally sh*t the upper section of Steep Creek is.

A quick easy abseil down the cliff line and we were soon in the creek, which was pleasant walking and allowed us to make easy time. The canyon itself was spectacular. Deep, dark and increasingly narrow. It is hard to do it justice, but hopefully the photos give an idea of how good it was. There were a few jokes about my chances of making it through, however the one time I got jammed it was the pack – not the spare tire – that caused the problem, and slipping it off I was all good.

Soon we were down at the South ‘Boori, which was looking very pretty. We found a nice sunny rock, grabbed lunch, refilled our water and then headed up the easy pass back onto the ridge top.

There was some debate about how high the canyon would go in Steep Creek, so we walked a little higher than was probably necessary before finding a nice pass down a gully and into the creek.

What we discovered was one of the swampiest, scrubbiest creeks I have ever seen. We alternated between wading through the brown water – forcing our way through the overhanging bushes – and climbing up on the banks. We discovered that even what appeared to be land wasn’t, and was more a floating pile of plant matter held together by grasses and ferns. Generally it held up, but every few meters one of us would drop a metre into waist deep water. Eventually we got to a nice section of canyon, although it didn’t last long.

After a fair bit of slogging down the creek we were getting a bit despondent, with the cliffs of the ‘Boori only a few hundred metres away and not much promise in the creek. However it finally got good, and we then came upon abseil after abseil, and a few hand over hands, as we quickly dropped downward through some very pretty sections of creek. Best of all was the second last abseil, down a waterfall and into a deep, water-worn hole that plunged 25 metres into the ground before the water headed through a tunnel. It was an incredible, picturesque drop.

The only downsides were the usual idiotic anchors that one finds in canyons, like the backup sling that had been removed from a rock protrusion and abseiled off, the sling on the tiny sapling (removed), and unnecessarily small, unrated maillons, which we replaced.

Finally we got back to the creek just before 6, filled up with water for our dry camp and trudged back up the pass, which was much harder on the legs the second time around. We moved with some pace along the ridge, down the saddle above Steep Creek and up the other side, getting onto the faint foot pad right on dark. We pushed along in the faint light as long as possible, before it finally got so dark the head torches had to be used near the Froth and Bubble turnoff.

Other than one point soon after where we lost the track and got turned around, the navigation was flawless, and with the help of a compass we did a great job of staying more or less on the track, getting back to camp just before 9.

After stripping off the wet clothes, collecting a heap of fire wood, and gorging on some chocolate, we finally started on dinner around the camp fire, which was joined by a couple bottles of red. We were half expecting Bruce to turn up, so we enjoyed the fire into the wee hours, finally dragging ourselves to bed some time before 1.

Just before six we were woken by the sound of footsteps, which once we called out and got a reply in a thick American accent confirmed Bruce had safely made it. Despite the plan to do two canyons again that day, we were all exhausted and fell back to sleep, leaving Bruce to rest on his pack in the brisk morning air.

When we finally got up and made a much slower breakfast before started the push back out the ridge, it became pretty clear none of us where keen on another big day, so we agreed to just do Froth and Bubble (Bubble Bath) Canyon.

The walk out was almost entirely retracing our steps from the day before, the drop in was easy, and soon we were wading through the pretty upper canyon sections. When we got to the first little drop, Kosta decided to be different and demonstrate his swing technique (captured on video here: http://www.youtube.com/watch?v=G28vvdr5jAg ) which gave us all a chuckle.

Soon we were dropping into the main constriction, a spectacular, cavernous area with a tiny slot high above. From a chockstone we abseiled deeper, walking on the sandy creek banks before it narrowed into a tight slot. Eventually it opened out again, before taking us to the huge overhung boulder blockup at the end. We were all shocked by just how good the canyon was – better than anyone expected – and good enough to get declared Crikey’s little sister. It was well worth the trip, but not one to be rushed through, rather it was a pleasure to explore, photograph and marvel at.

Finally we had lunch before heading up the exit gully and back to the ridge.

A couple hours later and we were packing up the camp site then on the fire trail back to the cars. We were back by about 4.30, with plenty of daylight, and time for a pub dinner on the way home.

The navigation had been almost flawless, T1 and I made it four trips in a row to finish in daylight, and our trial of the fare at the pub at Kurrajong Heights was rewarded by some tasty, well priced pizzas. A great trip in a wonderful area with good company: what more could you ask for?