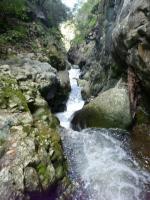 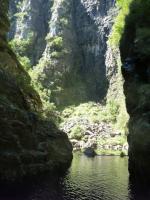 T1 and I made an early escape from the city on the Friday afternoon, getting to my place by about 5 so we could pack the car and head off. The drive up the mountains was wonderful, the weather forecast good, and we were at the start of King Pin Fire Trail by about 8.30, a good hour ahead of the second car load. We set up the tent, scavenged a healthy pile of fire wood and lit of great little fire. The wine soon came out, and by the time Jiri, Cat and Bjorn arrived we were more than a little merry.About midnight it was off to bed, with the alarm set for six.

Jiri decided to have a little fun in the morning, and at five to six the entire Kanangra region was jolted from sleep by U2’s ‘It’s a beautiful day’ as he blasted the noise from has car stereo and flashed the headlights on and off. Needless to say, we got out of the tent pretty quick, mainly to try and stop the noise as T1 and I, who had been the primary drinkers, were feeling a little seedy.

After a nice hot breakfast and a rather slow repack of bags we got on our way about 7.30. The fire trail walking was pleasant, and before long we came out of the trees towards Mt Thurat. From here it was a nice little track that eventually disappeared among the scrub. The nice wide ridge was looking quite lush and green, and every so often we’d get glimpses of the plunging valley to our left.

By about 9.30 we reached the rocky outcrop which indicated our turn off down a steep scree slope full of precariously balanced rocks ready to crash down at the slightest touch. By 10 we were in the creek, which was beautiful and lush, and seemed to have a really healthy flow of water. It was only a short walk beyond and we got to the first of four massive drops which make Davies so impressive. The falls plunged to our left almost 60m to a pool below, before turning almost 180 degrees and coming back past us, leaving a finger of rock jutting out to abseil off. Opposite, a lush green slope appeared to be the remnants of a past path of the mighty creek.

Not long after we were at the second impressive abseil, down the side of a pumping waterfall. This confirmed our view that the water levels were above normal, with the falls looking much more impressive than expected. We made it down to the pool, which came complete with the first of three floating dead wallabies, waded through a narrow section, admired the towering bluffs opposite and started on to look for the next abseil.

Foolishly we’d only left Jiri and Cat to do the pull down, and the rope had stuck on the long drop. By The time Cat chased downstream two of us were already down the next drop and had to clamber back up to go back and assist. All up the mistake cost us a fair bit of time.

It was then back down the next drop into a narrow section. Tired and frustrated by the rope problems, I decided to stop for lunch, and cooking up some noodles and a cup of tea on a sun-drenched rock certainly lifted my spirits.
The next drop, although only about 10 metres, was possibly the most fun of the short abseils. From some bolts on a boulder we dropped between the twin streams of the waterfall, past a pretty overhand, and into a wonderful pool.
We were a little more worried about time now, so we powered on down the creek with a little more determination. Like all the canyons in the region, the jagged angled rock creates some stunning scenes, shaping the creek, creating falls and rapids, sharply turning on itself, and ensuring the scenery is never boring.

The third big drop was possibly the most spectacular, with the wide falls to your side plunging into a deep pool that then flows into a slot less than 50m further on. The slot section is quite pretty, and different to most of the creek.
After a little more time we got to the top of the last big drop. We wasted a fair bit of time looking for slings, finding three old slings that would now require going through a fairly scrubby area, so eventually we pushed downward and set up a sling on a nice little tree right on the edge. It was another fun abseil, although went past some pretty loose rock, some of which went crashing down when Jiri made the initial descent, leaving all our hearts in our mouths. Bjorn managed to avoid the loose rocks, only to get stung by the wasps from the nest we had to jump directly over half way down.

From here there was another chunk of creek walking to our camp site near Whalania Creek. Several more little falls, most of which could be skirted, appeared in our way. Even the small ones seemed particularly attractive.

Eventually, at about six we arrived at the creek junction and began looking for a nice flat spot to spend the night. While there was no shortage of possible areas, although almost all were covered with stinging nettles, so it took a bit of time before Jiri discovered a good spot. We set up, collected wood, and by about seven were settled down by a nice little fire cooking up dinner and getting into the well deserved beverages.

Despite my fears of another early wake up from Jiri, Sunday was very civilised, with no one leaving their sleeping bags before nearly eight. After few cups of tea, a hot breakfast, some resting of sore muscles and finally packing of bags, we set off at about 10. The spur onto Paralyser kept us busy for the next few hours. Bjorn and Jiri cheerily plowed ahead up the unending ascent, while I brought up the rear, streaming sweat and cursing my appalling fitness. Looking back, we caught glimpses of the third spectacular set of falls, as well as a view of similar falls in Whalania Creek which definitely deserves a trip of its own.

There was a rest at the top of Paralyser to sign the log book and knock back a celebratory tipple of Sambuca, before continuing up to the next peak on the ridge. We soon stopped for lunch (at my failing legs insistence), enjoying the nice breeze which had blown up.
The last section of fire trail was raced down and we were back at the cars well before five, with the sun still high in the sky.

We headed off to the Hampton pub for dinner, with T1 and I turning taking a few minutes longer after faulty shocks (one was 2 inches lower than it should be) caused the car to drift off a corner, leaving T1 to fight it as it headed first for a tree, then for a dirt bank which exploded in a cloud of dust as we slid sideways.
Amazingly we didn’t roll, or cause any damage to the car, so were able to catch up with the others at the pub and enjoy a well deserved country style (code for ‘every meat you could imagine’) meal.

A great trip through a wonderful area, made all the better by recent rain which ensured it was particularly green and the creek was flowing very healthily.