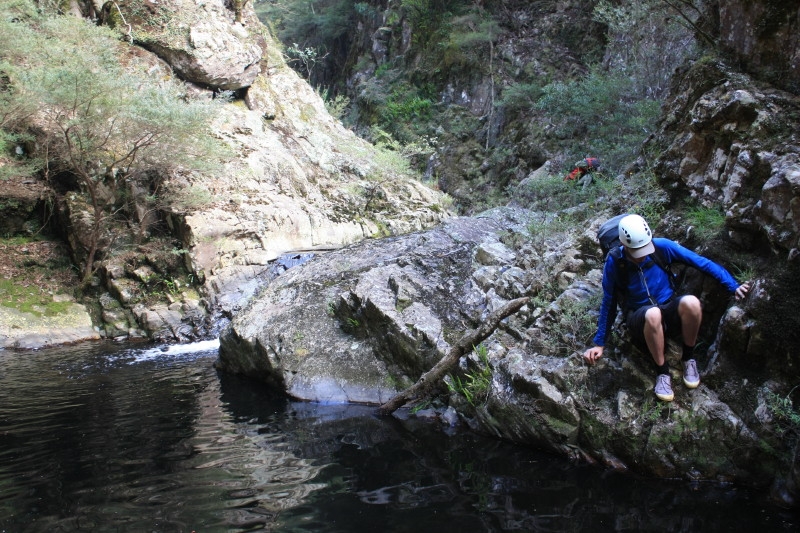 “A tremendous trench in the Earth’s crust” became the agreed clich for this deep gorge after a long descent of it on Saturday 23 Jan.

After travelling up by various means and at various times the group coalesced on Saturday morning over an obligatory cup of tea. Then it was off to Mt Thurat and into the gorge fairly high up, entering in the lower part of Thurat Creek. This gave us the opportunity to see some of the upper gorge which was beautiful on this hot day, with several wades, short swims and downclimbs.

Finally by around midday we rounded a corner to behold a yawning chasm reinforced by towering quartzite walls. Jutting out into this colossal incision was a Minas Tirith style prow of rock, dropping 60m either side. After a brief search we found some old slings right at the very end of this prow, creating an awesome 60m abseil down to the edge of a shimmering pool.

But there were matters of great importance to attend to prior to this abseil – lunch. Glen rigged an extra bit of sling for security on this long drop and was first down, followed one by one by the rest of us.

300m further on was another gigantic 60m abseil in stunning surrounds. Then After dealing with that the group spread out a bit, Dave and Glen going ahead to rig the next pitch while the rest of us followed in good order. We regrouped at the next 20m drop but where was Doug and Rachel? I went back to find out, and it turned out their progress had been suspended due to injury time. Doug had a bit of a cut on his leg but Rachel had a broken hand. Actually, we didn’t know it was broken at the time but it certainly appeared to be a serious injury, so serious in fact that Rachel had to do the remaining abseils left-handed. This included the final 60m drop! But no one was deterred from completing the canyon, least of all Rachel herself, and it took some hours of steep scrambling and creek walking before we finally decided to stop just on dark. We had to make to with what was available for camping, but it turned out to be quite comfortable once we were settled in.

It was into our tents soon after dinner because of the lateness of the hour of our arrival here. It had been a long and exciting day!

Next day the weather was much cooler and the high tops were shrouded in a damp mist. We set off on a steady climb up a long ridge, nearly 1000m of height gain overall in a single hit. Once we reached the plateau we found ourselves enveloped in damp mist and among this moody setting were silent trees and ferns, like a painting.

It was very pleasant level walking on rarely trodden and partly overgrown vehicle tracks for a few hours back to the cars. This stage of the trip was punctuated by a lunch stop where the industry of tea and jaffle making was carried out with great focus. And thus a great weekend was ended, off to the hospital for Rachel for splinting trussing and pinning of her carpel injury.