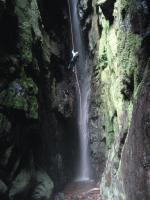 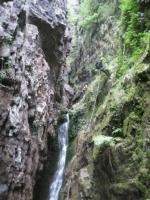 The 3 day Australia Day long weekend was a perfect opportunity to set up a base camp near Kanangra and spend each day in a different canyon.

One thing the trip wasn’t was carbon neutral. Because each participant was either coming a different way or arriving or leaving at a different time, all 7 people on the trip had to end up taking their own car. And to make matters worse, Pete turned up not in a car but a one ton truck! Anyway, climatic considerations aside, back to the canyoning…

My photos are here:

Saturday 24 Jan – Danae and The Spires

There followed a series of spectacular and exciting abseils. The canyon was a deep vertical incision into the Boyd plateau and surrounded by steep quartzite spires and walls. There was water splashing down some of the drops, a welcome relief from the heat outside. The water levels were lower than normal but we were kept wet, assisted by the occasional rain shower that was sometimes hard to differentiate from the spray of the many waterfalls.

We made excellent time as we had plenty of rope, allowing us to rig the abseil ahead while people were still coming down the one behind. After the abseils we came to the yawning chasm of the Pooken Hole, surely one of the mightiest of all blue mountains gorges, with its river bed choked with huge boulders.

We reached Kanangra Creek for a well earned lunch, and rested in the shade before the sweltering climb over the spires.

The afternoon was spent climbing the spires, spectacular pinnacles basking in the heat, with an exposed abseil off the highest spire to gain the narrow notch between it and the Thurat Range. Then there was a long climb to a spectacular high vantage point with views looking over the top of Kanangra Walls and beyond to the Broken Rock Range. Finally a bash through scrub to Big Misty and beyond to the Thurat Fire Trail and back to the car.

Setting off from Kanangra Walls at around 9am we soon caught up with a group ahead of us, and this caused some waiting at the top of each abseil, but the scenery and weather was so great this wasn’t a problem. The trip started with an easy walk down to Kalang Brook and the abseils started soon after. There were some huge ones, two abseils were about 60m in length so we made the most of our ropes.

Everyone had great fun on the abseils. We had to time our lunch strategically, snatching a bite to eat while waiting at the top or bottom of an abseil. Each abseil had a waterfall and a nice cool pool at the bottom and some of us couldn’t resist a refreshing dip in the water.

That evening some returned home, leaving 3 of us to enjoy more wine and food with another canyon to look forward to …

By the third day it was time to wind down with a gentler and easier canyon. Dione Dell is a beautiful gorge with 4 or 5 easy abseils. It was a beautiful day, very warm, and there was no better place to be than here. The abseils were nice, the creek lovely and clear and we had all day. It was a great way to spend Australia Day. We enjoyed a dip in a very inviting pool at the bottom of one of the abseils and had lunch in a great spot with a great view just before the climb out.

After the easy climb out we were back at base camp by early afternoon so took our time to pack up and then drive back home to our different destinations.

A great weekend had by all!