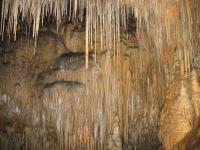 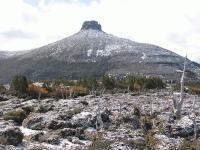 Party: Me, Vannessa and Andy Jacobs

We were a bit worried about the weather as we passed through a downpour on the bus on the way to the start. The forecast wasn’t the best, but at least it was dry as Vannessa and I started our trek in the colourful moor lands. We soon reached the pretty Crater lake, that was surrounded by beautiful orange deciduous beech trees (Fagus) at this time of year.

We continued going up towards Cradle Mountain, arriving to a lookout over Dove Lake where we scoffed down some lunch in the cold winds. Continuing past the side of Cradle mountain under cloud, we soon reached our destination for the night just before the rain picked up!

Here we met Andy who’d been here a couple of days already, climbing the nearby peaks of Cradle Mountain and Barn Bluff. We spent a good night in the old hut where the wallabies were grazing on the grasses at the front.

The morning was dry, but just as we set off some light sleet came down. Passing by a few lakes en-route, we reached Lake Windermere for an early lunch just as another dumping of light snow came down between gaps of sunshine. After lunch we reached some button grass plains as we admired the surrounding peaks through gaps in the cloud. A short diversion en-route took us to some ancient King Billy Pines.

This was a long day for us as we continued – passing through some forest before reaching Frog Flats where we were rewarded with beautiful views of Mt Pelion West with a light covering of snow. After another short slog uphill we finally arrived to the hut just before dark.

Blue skies and a light covering of snow made for a pretty start to the day. It was a slight uphill walk to a junction leading to Mt Ossa and Mt Pelion East. We started heading up towards Mt Ossa before realising that the summit was covered in clouds. Mt Pelion East was clear so we decided to climb that instead. We hurriedly descended back to the junction and had lunch. Vannessa decided not to join us and instead walked on to the hut.

It was snowing intermittently as Andy and I hiked up towards the summit of Mt Pelion East. Luckily there was a break as we reached the top for broken views of the surrounding landscapes.

Almost everyone in the hut was up before dawn today to get an early start, another great morning with blue skies. We walked in the pretty rainforest for the next couple of hours towards Hartnett Falls.

We left the Overland Track at Hartnett Falls following a route through the ‘Never Never’, heading towards the Walls of Jerusalem National Park. We followed the Mersey River upstream passing by several spectacular waterfalls. We ‘lost’ the route on several occasions but it was easy navigation beside a creek. Once we had climbed up above Clarke Falls it wasn’t long before we saw Junction Lake. Here we relaxed for a while in the warming sunshine removing a few leeches that had latched on to us. We then found the characteristic old hut in the forest set beside the lake’s inlet creek, and enjoyed a relaxing afternoon and serene night.

The morning’s walk started with a chilly crossing of the creek, then following a route uphill towards Lake Eros and the Traveller’s Range. It was a still, misty morning – so misty that when we reached the lake it took us a few moments to realise it was in fact the lake and not a valley filled with clouds!

It wasn’t long before the track vanished and we were left to navigate across the range; a breathtaking terrain with lakes of various sizes interspersed with rocky outcrops surrounded by scented and colourful shrubs. It was slow walking through the shrubs, around lakes and up and down the rocky sections. It took us most of the day to reach the pass down to Du Cane Gap.

We had nearly given up finding the route down, but just before 5pm we found it. It was a quick half hour scramble down and another half hour of walking in the dark back on the Overland Track before we reached the tent platforms at Windy Ridge. Here we were joined by some game possums who tried their best to get some of our food – one even put a small hole in our tent.

It was a 3 hour trudge down to Narcissus Hut – mostly in forest with some button grass plains along the way. We reached the hut just before lunch and radioed the ferry base to book a seat on the ferry. They didn’t have room for us, but advised some people may not show, so it was an anxious wait for a couple of hours before we were allowed to board the ferry!. It was overcast and raining so we did not get to see Mt Olympus and the other peaks which guard the lake.

After our trip we spent a few days exploring Hobart and surrounds, including Port Arthur, the dolerite sea cliffs of the Tasman Peninsula and finally Hastings Caves. We celebrated our trip at a good pub, enjoying seafood meals with some Tassie apple ciders to wash it down.