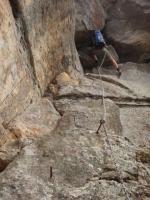 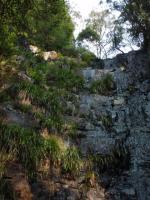 WHERE: Moko Creek, Blue Mountains NP
WHEN: 4-6 April 2008
WHO: Jiri Svec, Tom Murtagh, plus a cast of pikers
WHY: Seems to be getting to be a bit of a habit

I’d been wanting to trot down Moko Creek for some time — I can’t think precisely where I heard it, but the rumour went that despite the sound wisdom of Bash The Ridge And Not The Creek, several of the streams running south off the Gangerang Massif are in fact excellent walking, with crystal waters, beautiful cascades, the creekbed comprises extensive and impressive rocky slabs stretching to the far yonder, it’s a fully licensed venue, there are friendly yowies to carry your pack and massage your feet, et cetera et cetera. Clearly worth a look, even if only to disprove the rumours of a wet bar on this Big Rock Candy Mountain.

So we got a group together,
drove out to Carlons on a Friday night,
walked into Mobbs Soak just past one,
shivered away a scant few hours,
and woke fresh and pure as the driven snow not a minute after six AM,

one of the party members decided that the walk was too long, the sleep too short, and the odds of survival too small.

Needless to say this disgraceful and extremely poorly-timed act of piking was not received with the best possible graces, and pre-dawn politics resulted in two of us bashing the Narrowneck back to Katoomba while the others contemplated the inside of their eyeballs for a few more hours in the dusty surrounds of the Mobbs cave. The joke was on them — we re-designated our victory beers as angry beers, and polished them off en route.

Not being of the easily-educated mindset, last weekend we decided to have another crack. Jiri, Mitch and I headed out from Katoomba Station, got into Mobbs — again, well into the witching hours — and again woke to the inky blackness of six AM,

Mitch decided that his legs were too sore, or he had sleep apnea, or his hat was the wrong bloody size or some such rot, and that all things considered would we mind particularly much if blah blah blah. By the third blah he’d already fallen back asleep and we were on our way down Yellow Pup. Must be something about the air in that cave. Caveat pikor.

As we descended into the Coxs, we were enveloped by the smoke from NPWS’s “hazard reduction burning” on the Krungle Bungle range, which effectively hid the other side of the valley from view. I mention the burn because it cast a (literal) pall over the entire weekend, setting the sun a deep orange even in the middle of the day and making us smell like a couple of burnt, sweaty eucalyptus lozenges. Bashing the Neck on Friday we had become aware of the eerie patches of wildfire on the adjacent range, red eyes glowing in the dark, our fingers crossed that the fire would stay put and not, you know, spread, or chase angry packs of toasted dingos into the Moko catchment.

Up the other side. We dropped into Moko Creek just after Moorilla Maloo, indulged in some fairly light scrub bashing for a short while, enjoyed the scenic rock slabs, and suddenly the bottom fell out of it and we were into the first of many, many abseils. We brought a single 60m rope and made good use of it (spoiler: we’re not still stuck in the creek) but several of the drops we ended up doing as two-stagers. It was past three o’clock before we’d negotiated the obvious steep bit on the map — and twice as far to go again.

Fortunately there were only a couple more abseils, but they were punctuated by vicious viney jungle, full of all your favourites. We were getting tired, Jiri’s knee was playing up, then he got done by a giant stinging tree, then I got done by, ahem, a dodgy anchor of my own choosing … but as we trudged along the lowest sections of the creek we were relieved to find it generally agreeable rock-hopping rather than the other stuff, and collapsed into camp at the Coxs as the last minutes of twilight ebbed away.

Next day was up Howling Dog to Splendour Rock to collect Mitch, Cat and Bec, and back to Carlons for a sly lift out. Huzzah!

General comments: this was a very fulfilling trip, but very long. It almost seems worthwhile going into Konangaroo to get a headstart on the Saturday, but this makes for a VERY short sleep followed by a long day. Not a good combo for abseiling. Maybe come in from Kanangra? Is that cheating?

Notwithstanding, this was an excellent weekend in the southern Blue Mountains and thanks to the rotating cast of thousands.