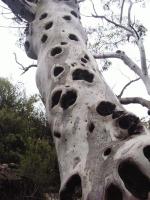 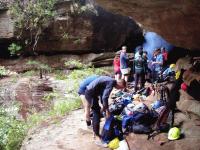 It had been raining a bit (or rather a lot) up the mountains just before the weekend – but that didn’t seem to deter any of the starters – but at the North Richmond Bakery – we thought it prudent not to do Claustral Canyon which most of the party intended to do (in two groups) and instead join a group that Peter Raines was leading down Why Don’t We Do It In The Road Canyon at Mt Wilson. So we drove to the mountain and met up with Peter at the fire station.

It was raining and quite cold – so most of us got into wet suits at the fire station – then set off for the short walk into the canyon.

On the way – we overtook a UTSOAC party doing an optional early abseil and ran into another UTS party on the second abseil. We found an alternative belay point and abseiled into the canyon. In the creek – the water was up promising us an adventure. We continued down a nice gorge section of the creek and soon arrived at the lower canyon section. This began with a nice abseil down a waterfall into a dark pit. The current was strong enough for John to loose one of his volleys in the dark pool. Then followed two short abseils. Some in the party injured their knuckles on one of the drops – and another major mishap occurred when a (very fancy brand new!) GPS device slipped out of Chuin Nee’s pack and vanished into the torrent. Despite a lot of searching – it was not found.

At the end of the canyon – we had lunch in a large dry cave. A fire was lit and the jaffle irons were unpacked. A friendly water dragon posed for photos just outside the cave. The walk back began with a nice ledge traverse to avoid trying to wade up the Wollangambe (which given the current would have been futile). Then a nice climb in mist and drizzle back to Mt Wilson.

Some of the party had to return to Sydney, while the rest of us made our way to the Festival of Canyons party at the Cathedral of Ferns Campground.

Thanks to local, Peter Raines, we had a nice pile of firewood ready to burn – so a large fire was built and many fine ales and wines were consumed (perhaps too many?)

Another great day of canyoning. The water was high which made for a fun trip. The level was not really dangerous – and you only had to be careful in a few spots. We did puncture a few lilos however.

The canyon was very beautiful -with lots of long pools. We exited via Joe’s canyon which was actually flowing quite well.

A great weeekend. Thanks to all that came along and made it such a great group of people. In particular – thanks to those hwo brought along ropes on Saturday and assisted with the abseils, and to Peter for dumping the firewood and in particular – to the main organiser – Ellen Braybon from UTSOAC.