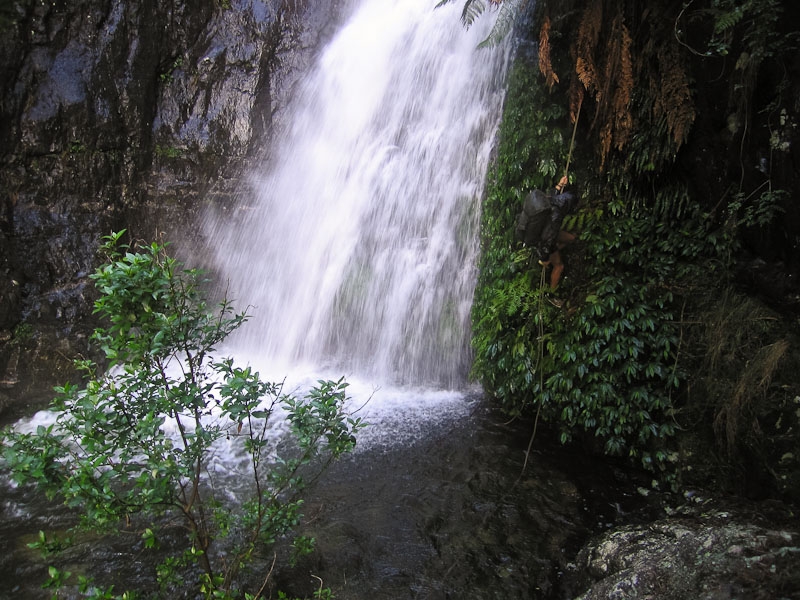 Leaving Sydney on a Friday night we met in the Kanangra Boyd National Park at the start of a fire trail late that night. We unwillingly woke up with the sun, and after some preparation set off on a clear day at 7:30am.

A couple of kilometres later we reached our turn-off and started along a walking trail into the scrub along the ridge top. After battling one thick and unpleasant section of scrub, we thought we’d reached our intended turn-off point into the stream. So down we went into this lush and pristine stream. A little while later we realised our minor navigational error and continued walking along the stream until we reached the first waterfall of about 40 metres.

Abseiling down beside the water flow, we noticed that the water was very high due to recent rains. Our next abseil took us closer to the flow in this wild and lush creek. And the abseils continued with another few excellent drops in quick succession. Two of them in the direct path of the gushing whitewater, where we struggled to maintain control. A couple of us emerged with cut and bruised elbows.

Then it was a short walk along the creek under the dark canopy, passing by the full skeletal remains of a wallaby, before we reached the top of
our next fall. Here we stopped briefly for lunch and replenished our energy levels.

We then continued down the next few big drops. The first abseil had us arriving at a small pool, before the water plummeted over the lip of the next fall and down about 55 metres. Here we opted for the safer descent to the side of the flow as it was just too strong!

This took us straight down through the cliff-hanging scrub and thick green undergrowth, with the odd leech to fend off. It took a while to get through the scrub, and after descending most of the way, I was disappointed to find the rope was just two metres short! I had to prussik back up 10 metres to set a re-belay from a tree hanging off the cliff in order to reach the bottom.

Next down was Mitchell who managed to get this pack stuck mid-air in a small tree, requiring some more time to resolve.

Then came another long drop before things started to level out a little,and the odd shorter drop was required.

The day was getting late, and as we were behind time, we decided to camp on a flatter section a few hundred metres short our intended target at the junction with Kanangra Creek. Again, there were a few leeches about, but we got a fire going and all enjoyed a well-earned meal before nodding off for the night.

We all slept in a little the next morning before continuing down to the junction trying hard to avoid the many stinging nettles! We filled our water bottles, then started up the steep ridge 750 metres to Burra Gunama Hill. It was hot and humid, and I was totally soaked in sweat!. We had lunch on the hill, as we were bothered by some biting blow flies. We then continued along the more gently ascending ridge until we re-joined our route of the previous day, and trudged back to the cars.

On the way back to Sydney, we stopped in Mt Victoria to enjoy some burgers and drinks in the balmy afternoon weather.

It was an excellent trip, down a rugged and wild creek, with the severity of the terrain slowing our momentum.