Up North – The Yodeller Range

The Yodeller Range is an alignment of massive sandstone blocks to be found in the extreme north of the Blue Mountains, running in a rough arc from the south to the north to the east it offers some of the most sensational walking come scrambling to be found in NSW. The nature of the scrambling combined with sometimes extreme exposure put trips to the Range in a vague category between bushwalking and rock climbing. The Yodeller range presents a new facet of bushwalking for those who feel that they are at heart frustrated mountaineers. 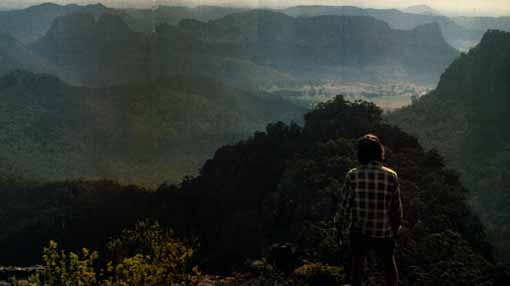 Starting the trip from Nullo Mountain the prospective is likely to be in for a large shock when, having breached the initial barriers of scunge, the first cliffline is reached and looking north the Yodeller leaps, larger than life from the conservative contours of the map. The initial bumps are quickly overcome till a ferocious saddle is reached. On the first trip our party learnt two important principles here. The first was to be sure of your starters as we were forced to camp by a newcomer who wasn’t all that he made out; the second important principle can be applied throughout the Range, that the impressive cliffs that frequently bar the way often offer passes in the most unexpected places. Thus we were able to climb directly out of the saddle and do a virtually skyline traverse to just below the top of Watts Mountain. From a pinnacle in the saddle the oscillations traversed can be appreciated at sunset from the shadows cast onto the opposite side of Emu Creek. A group of us, reflecting on the semi alpine nature of the day, dubbed the unfortunate obelisk the Aiguille du Midi, a sad reminder of the dry nature of Yodeller camp sites.

The following day’s effort saw us continue our route with ever increasing difficulty till a high cyprus pine topped hill was reached, here the ridge undergoes a change from often steep but solid ground to a more broken and dissected nature. A steep pass put us onto this section of ridge which is before the first great saddle before a large isolated and un-named peak. Here also we found the Jungfrau, a large hole gouged from the rock leading down for 70′-80′ to emerge on the other side of the ridge.

Things now begin to look difficult with a large pinnacle barring the ridge, the Aiguille du Schooner. As it turns out the Yodeller Principle of Direct Scrambling came to play and the thing was traversed over the top and down the other side followed by an amazingly steep pass directly onto the Un-named Peak.

Upon reaching this saddle one could easily despair of reaching the top of the next peak but with a little nerve and some basic rock climbing ability a route appears, as usual directly to the top of this, perhaps the most isolated and satisfying peak to climb. An extremely exposed but easy downclimb (probably better abseiled) leads to the razorback and the Blue Yodeller after picking your way through assorted clifflines Octave Gap is reached.

The ridge from Octave Gap onto Watts is a rather bothersome affair, it offers some of the most enjoyable scrambling to be found on the range but is capped near the top by a nasty vertical 30′ wall which bars all progress, bypassing it would be a rather contrived affair and climbing it decidedly hairy as the ridge abutting it is a thin razorback with overhanging dizzy drops on either side and belays are scarce, it presents quite a challenge. One could do the trip in reverse and abseil from the top but it would be still be avoiding the problem. Watts mountain itself is good fun to traverse and the route down through a cave over thin ledges has been tested for weights of up to 19 stone, heavier people are advised to start jogging. Here too one can see a large arch, the Beer Stein, at its best angle on the Emu Creek side.

The most spectacular peaks follow Falsetto Gap, the Wedding Cake – completely cut by savage gaps on either side it presents a fearful profile from the farmland above which it towers. Paradoxically it is one of the easiest to climb; if you can pick the route a complete traverse of its two peaks is possible ending in a steep pass directly into a narrow chasm on the Wedding Cake’s eastern side. This notch 200 feet deep and 80 feet wide comes as something of a shock when first seen from the road below.

Two main peaks remain: the Oakland Peak and the Christmas Pudding. The first is, again, completely isolated by the notch on the west and a thinner but not so deep slot on the other. We have found only one route onto it directly from the main notch, the other slot presents a complete impasse and severely limits the possibilities of a full traverse. The Christmas Pudding is joined by a narrow isthmus to the last, comparatively straightforward piece of range ending in the Cats Ears.

So that’s the Yodeller Range – rugged and uncompromising, a place to purge yourself of weekly humdrum, the country is harder but the rewards are greater. One could possibly compare it to a monstrously distorted Korrowal Buttress.