Trip To The Blue Breaks

On the walk were Dave Noble (sometime leader), Ross Bradstock, Chris Wall, Ian Watson, and myself.

DAY 1. We set off early from Batsh Camp, skirted around Bent Hook Swamp, and ascended Kooragang mountain and Mt Meier and descended to Colong Station for morning tea. The weather was fine and after crossing Alum Hill Ck and climbing Colong Gap, we were afforded a tremendous view into the Tonalli River Valley. We descended to the road and had lunch near the dam at Yerranderie.

After lunch three of us climbed Yerranderie Peak. The view was magnificent as usual with all the sandstone clifflines and a glimpse of the top end of the dam. This peak also affords the best views of the new airstrip – that great piece of scenery which manages to clash with and despoil its surroundings. Thankyou Yerranderie Total Environment Project.

We descended from the peak and joined the other two as we walked around Yerranderie and wondered at the restoration work at the Church where stove-pipes have been put through stained glass windows; Thankyou Chevalier College, and the partial demolition of those horrible old sandstone brick police out-houses (thankyou MSWDB?).

And so it was with heavy hearts that we left Yerranderie and headed for the Tonalli River immediately below Lacys Gap. There was a beautiful sunset with the Burragorang Walls turning orange and the sky a deep blue. Camp was made just on nightfall on flats beside the Tonalli.

DAY 2. Dawn saw us totally inactive. We had a late start but soon were climbing steadily towards Lacys Gap. We reached the cliffline, then sidled to the left and went up through the gap. The view was once again impressive despite the weather (overcast).

To get to the end-point of Lacys Gap involved a jump across a deep slot the return jump being more interesting due to the uphill nature of the jump. Ian Watson, the last to return baulked at the jump.

Other walkers: “You’re going to die. You’ll never make it. Its too far.”

Watson: “It is difficult.”

Other walkers: “Not yet, we’ll get the cameras.”

Exeunt, return with cameras. Watson jumps and clings to the other side. Rocks are thrown at him but he scrambles to safety. Boos.

“Wait until next time.” Despite the offer of a schooner, Ian refuses a re-run.

We set off across the tops through low scrub towards Lacys Creek South Canyon, passed the cliff line at the creek (293913) and descended to the creek. The valley floor was covered in Blue Gums for its full length. They were all sizes but there was a dense mass of ferns, vines and bushes, which made it quicker, if colder, to walk the narrow twisting creek.

About a mile before the creek swings to the north and plunges down we found a rare open flat spot beside the creek and decided to stop early and camp.

DAY 3. After an early start we were quickly at the point were the creek swings north and plunges down. There was an abrupt change in the creek with the sandy bottom giving away to large room size boulders, waterfalls and cascades There was no difficulty getting down the creek although after rain you may be forced onto the obvious ridge on the left hand side. The last couple of hundred yards before the junction with Lacys Creek North Canyon was easy rock hopping.

There was a good swimming hole at the junction so we stopped for an early elevenses and a swim. The water was bloody cold.

We went downstream and turned north out of Lacys Creek and climbed over a small knoll towards what has become known as Watsons Pass. The knoll soon gave way to some cliffs of grass and as these flattened out to some terraces below the main cliffline the vegetation changed to a deep twisted mass of Lawyer Vine, ferns and prickly bushes. We had to push along the terrace towards the gap in the cliffs and then battle this type of scrub for much of the climb upwards through the cliffline. As we were all in shorts and T-shirts this scrub became very interesting.

Voice from the front: “This scrub is bloody murder.”

Voice from the rear: “Why don’t you follow the track I’m on?”

Eventually we gained the top of the cliffline where we stopped for lunch and admired the excellent views, of the cliffs and hills around Lacys Creek. Over lunch the subject of a name for the pass was raised and solved:

“Why don’t we call it Watsons Pass?”

and so it became known as Watsons Pass.

After lunch we headed to the other side of the Bimlow Tableland and turned west following it to the area marked as clear where we camped. The area was a bit hard and we had difficulty in obtaining water, but the views from the nearby clifflines where we could see the Broken Rock Range, Gangerangs, Wild Dogs and Kings Tableland made the campsite an excellent one

DAY 4. We were up early to photograph the views in the early morning light. We soon packed and left to the assurances of Dave that tonight’s campsite would be the “best in the mountains”.

At the top of the small rise behind us we stopped to make an entry in the small logbook which is kept in an ovaltine tin. We then went to the nearby headland (Noble Head) and used Presidents Pass to get through the cliffline and then descended to Greenwattle Creek for morning tea.

After morning tea Dave took the lead and we wound our way along this very pleasant creek towards the “best campsite in the mountains”. About lunchtime we came to a creek junction and Dave identified the creek to the right as Butchers Shop Creek and so we went to the large flat to the left of the main creek. It was a beautiful site. Large grassy area, big trees, plentiful firewood and water nearby. Dave found the exact spot that he had used last time when passing through, the fireplace and the log that Moose had slept next to. We lit a fire and spent the afternoon around the fire yarning and drinking tea in the sun.

DAY 5. It was a clear but chilly morning with a heavy dew so we took a while to get moving but we eventually set off up the ridge towards Vengeance.

We climbed quickly until the land flattened out and a dissenting voice was heard from the rear:

“Hey Dave, isn’t that Vengeance over there?”

Voice from the rear: “Then why in bloody hell is there a huge creek between us and it.”

The map was consulted and the error found. We had not spent the previous night at the “best campsite in the mountains” but in an imitation. Dave was banished from the lead and we descended to the creek, crossed it and started up towards Vengeance for the second time that morning.

The traverse of Vengeance was very spectacular. At the narrow necks there were only 10 – 15 feet between clifflines and so the walking was very interesting and the views of the surrounding Blue Breaks were also very good. We went over Vengeance and then Bull Island and then onto the Axehead where the only difficulty was encountered and we used a packhaul to get to the top of the Axehead. We finished the traverse at Gander Head where we could admire that beautiful galvanised iron shed that the trailbike riders have put up, and the good job they have done of clearing all that horrible bush out of Byrnes Gap. The road was followed down to the Tonalli River, where we camped.

DAY 6. Our last day was a short one and we retraced our steps of Day 1 back to the car at Batsh Camp whence we drove without interruption to Hampton where the walk was brought to a happy conclusion. 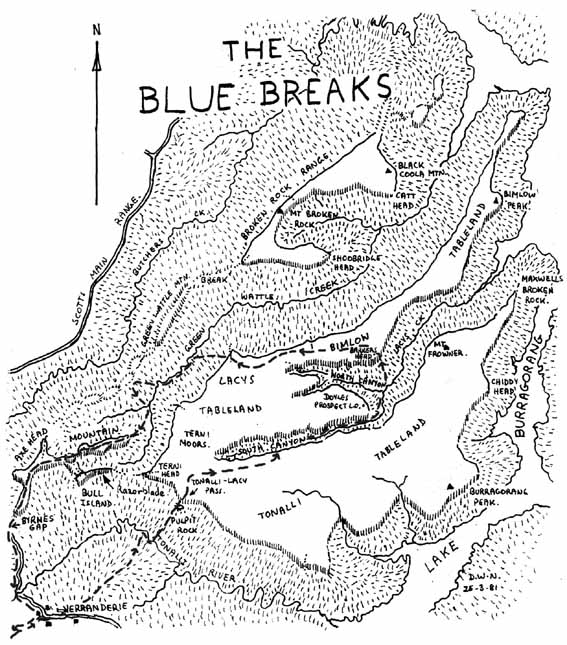 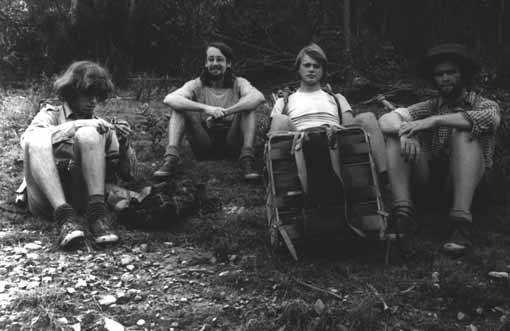 Above- Dave Noble, Keith Maxwell, Ian Hickson and Dave Ludowici at Butchers Creek on a Blue Breaks trip to Tonalli and Bimlow Tablelands (circa 1976) where they met up with Tom Williams. They then climbed a new pass up Shoobridge Head of Broken Rock Range. Photo – D Noble