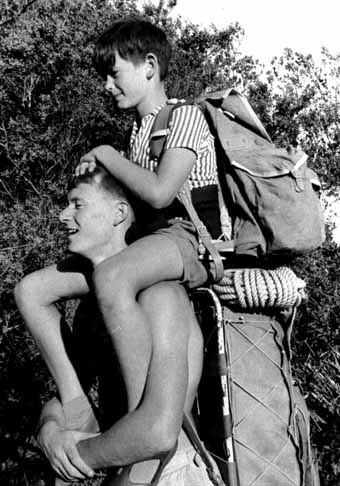 As far as I was concerned our hunting started at 11.00 pm. Friday night, by slightly choking myself on a wire fence (out in the middle of nowhere for no apparent reason (100 foot by 100 foot square around one fire place & two dykes).

That Dave Dash – “we’ll be camping 400 yds off the road (Bell’s Line of) along a fire trail labelled Mt King George” – unfortunately no one told me that Mt Banks & Mt King George were synonymous & so I proceeded in a 1962 Falcon (my lift) to explore all fire-roads in the vicinity unfortunately Pearces Pass is most steep & most boggy – so – we got bogged. He refused to drive down any more firetrails & so after many what seemed hours of wandering around firetrails (& chocked on a fence, having almost tripped over a Mini-Minor) I arrived – “Gad – a camp site,” having woken everybody up.

Saturday morning, after a surprisingly warm night, up early & left at 8.30. Dave thought we might enjoy the view off Mt Banks & neglected to inform us that we would be coming down the way we went up – so we climbed Mt Banks packs & all, but it was quite all that bad.

We charged off along a fire road to the head of our supposed canyon west of Mt Caley & along the ridge parallel to the valley waiting for it to look promising. After a short way it did, so down we chundered & began looking for our canyon after one & a half miles we became very disinterested – no canyon and then (after a tributary comes in from the left) we found one – a bit doubtful at first but by lunch & another mile we had done several swims and a lot of wading & found one fall (- Shale Falls we christened it,) & did two abseils (down to the right of the falls) one about 45′ onto a ledge & then a 30′ onto a rock 6″ by 6″ at water level & went for a swim – by this time we were all having trouble speaking properly between the shivers & the shakes. Just around the bend from the fall we stopped for lunch on many rocks about 30′ above a torrent (no more than two per rock) & the fire would not even heat water in a billy – the wood was waterlogged & rotten.

After lunch, with renewed spirits we chundered off from gibber to pool, gibber to pool down the Canyon (Dave’s very own – was he thrilled) & woe and betide more swims – not too long, all but one – does it present a formidable sight. (i) One must jump 6′-8′ into the pool – thus one gets thoroughly immersed & frozen (ii) one can see 40 yds of the swim (iii) One can not see the end (iv) there does not appear to be any places to stop on the way.

The end of the swim was only just out of sight & there is a submerged log (one can just stand on it) & a small sand bank (- virtually useless) towards the end.

Eventually we reached King George Canyon & after two more swims (one which can be avoided) we found a tremendous campsite on the right hand side of the creek below a bluff 50 ft. up from the water at a point where the creek cascades — there’s plenty of wood & grass to sleep on (behind a couple of big rocks).

Everyone gorged themselves & dried everything out (we did not expect any more swims) as miscellaneous gear (like everything in my case) was soaked. After much bushwalking talk & discussion as to what to call the canyon we toddled off to bed, me with a rather large hole in my sleeping bag – Moral! – ‘do not leave sleeping bags near fires unattended! They burn.’

Sunday morning, after another surprisingly warm night, & a terrific porridge-like breakfast we set out. After a little while reached Thunder Canyon (- opened out considerably here -) changed into dry clothes & began looking for a way out – no luck & Dave led us as far downstream as the tributary running into Thunder Canyon from the left just before Tomat Creek & there we found a terrific spur leading up onto South Tomah. (We needed to use a pack rope twice to pull our packs up small cliffs at the beginning).

Just before the climb onto Tomah the ridge is covered by a grassy clearing, here we had lunch & did a tin of fruit go down well. We eventually came onto an old overgrown jeep track which leads up to abandoned quarry & thence to Bells Line of Road.

Neville hitched back to the car (Mini Minor) 5 miles away while Al and I got a hitch in one of the first cars along virtually to my front door.

A very fortunate ending to a canyon trip with a very unfortunate beginning & a tremendous, but freezing middle. 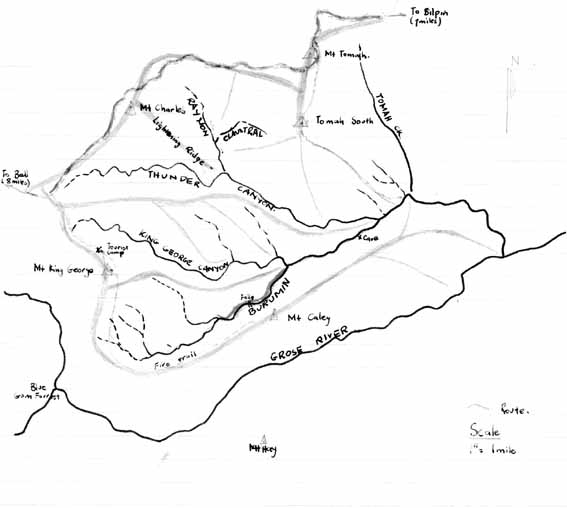