It was at the inaugural SUBW Dinner that I just suggested this trip to Dave. He was in quite high spirits at the time and he agreed without a second thought.

It was 8 months later, after we had called off the trip twice because of heat wave conditions during the summer months, that we arrived at Narrow Neck one very cold Saturday morning (at 12.35 a.m. to be precise). We were anything but prepared for the task we had set ourselves. Dave hadn’t been walking for several weeks and I had only permitted myself a daywalk the weekend before to Queahgong. I had put in a food dump for the SUBW GIRLS’ 3 Peaks which had left O’Sullivan’s Road about 2 1/2 hours previously (they were reversing our route); we were looking forward to seeing them in Kanangra Creek at about lunch time.

With little ado we hopped out of Dave’s faithful Beetle and trundled off along Narrow Neck to arrive at the Fire Tower (commonly known as “Big Brother”) 1 hour and 50 minutes later (walking all the way). We reached the fire road at the base of Carlons Head 40 minutes later where we stopped for a drink before Dave led off along the ridge toward Carlons Farm. We did have some trouble finding the top of the Carlon’s Gully track as neither Dave nor I had been there for 18 months and Carlon had since instituted his pack saddlers recreation.

Nevertheless we finally did manage to sort out the innumerable tracks and fire trails in the dark and eventually reached the Cox’s 3 1/4 hours after leaving Katoomba. Here we tripped over Ben (we always seem to be tripping over him) whom Dave recognised by his characteristic booming voice which emerged from the depths of his sleeping bag. Ben was going to Guouogang for a day while he got over a smallpox injection he’d been subjected to a few hours earlier. The doctor had warned him not to do anything energetic – so he promised not to go rockclimbing and instead spent the early hours of the morning running across the Megalong Valley and down Breakfast Creek so that he could climb Guouogang the next day and return to Katoomba to climb on Sunday.

It was still well before dawn (2 hours) as we attacked the Gasper Buttress which I had marked with a cairn the previous Saturday. (I think this is a good idea as the buttress is only 40 yards wide at its base and is set back from the river behind a copse of trees.) We had little trouble climbing slowly by torchlight and 1 1/2 hours later we topped Jenolan where we enjoyed our first rest and ate a little. We opened a tin of pineapple on Queahgong 25 minutes later and reached Guouogang 40 minutes after that – we stopped long enough to note our names in the logbook (7.40 a.m.). Somewhere between here and the top of Nooroo Dave looked at his watch incorrectly and thought we were well behind schedule. So we half ran and half tripped and fell down Nooroo Buttress to reach the bottom (Whalania Creek) 55 minutes after leaving “Gogglegong” Trig; we felt somewhat beat. A good feed of chocolate and licorice allsorts was had before we started up Paralyser. We reached the top 1 1/4 hours later (10.30 a.m.) although we found attacking the side of the North Buttress to be rather steep; however, there is no alternative. We took the South Buttress of Paralyser and reached Kanangra Creek at the bottom of Thunder Buttress. Dave had been feeling pretty beat and had been doing most of the leading so we stopped for 20 minutes. Here we met a snake which persisted in making a beeline, through Dave’s lunch, to wherever it wanted to go. This didn’t agree with Dave at all who wanted to eat his lunch and so the snake found several boulders coming its way every time it even hinted at coming ours.

We arrived at Cloudmaker at 1.30 and had our third tin of pineapple. Much to our great joy we were greeted by “Oh solomio’s” as we topped Rip Knoll. Not only were the five girls: Flora, Wendy, Rae, Denise and Kerry at the cairn but also a party of 4 C. M. W.s including Ray Peretz. He had set the previous record for the 3 Peaks (at 23 hrs 45 mins) with Ray Jerrems and John Fantini (who had won the S. U. 50 mile walk the weekend before). We spent 20 minutes chatting before Dave and I set off over the High Gangerangs for Gentles Pass and the Cox. We missed the best ridge to Dex Creek Clearing and finally followed the creek downstream to the Dex Creek campsite. We bashed through the mallee towards Gentles Pass which we misjudged by one spur and it took 1/2 an hour for us to find our position again. We had a good look at Marcotts Pass Ridge before descending Gentle’s Pass and following the ridge to the Cox where we arrived an hour and a half before dark.

We began to feel pretty lousy at about this stage and just wandered along the Coxs to White Dog, having a drink at the only permanent water: Bungalooloo Creek. At the bottom of White Dog we enjoyed another (our 4th) tin of pineapple that we had to bash open with a rock and spoon. We found that we couldn’t stomach or digest anything else but the chocolate and pineapple; we had to bring our steak, vegetables and peanuts home. It is definitely advised that future marathon walkers find something else to eat in order to add variety and balance to the menu. An hour later saw us on top of White Dog thence the slow plod to the ladders. Deberts Pup was a real cur — as Dave puts it: “The biggest little B….r in the Blue Mountains”. Once we were on the top of Narrow Neck we had brilliant views of the moon as it rose in the East. We then set off at a good pace to cover the neck in 1 hour 50 minutes despite stiff joints and bruised feet.

We reached the VW at 10.19 p.m. – 21 hours and 44 minutes after starting and we promptly climbed in to get warm. My shorts had split right across the crutch and to say the least it had been rather cold trundling the Narrow Neck. I just kept on thinking: “It’s doing my mutation rate good”. Dave then drove the 100 yards to the upper cave where the S.R.C. bods found us 1/2 hour later when they returned from the pub. 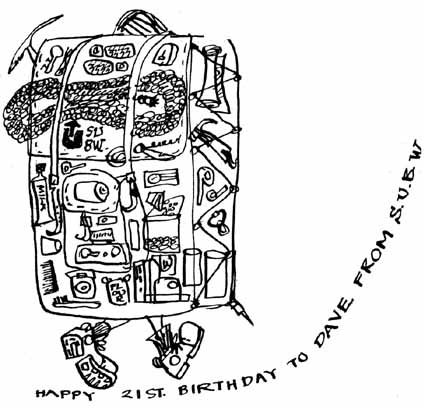