Round The Hunter Range

Some time ago I read in the “Sydney Bushwalker” that two of its earlier pioneers had ventured forth into the Macphersons. Because they did it a long time ago before any body else had got “tired” of the Blue Mountains, and even the more adventurous hadn’t got further north than Barrington, and, as, I say, because it was so long ago, therefore they were the first bushwalkers to have done that thing.

The years have rolled by and bushwalkers have been to Tasmania and to Atherton and not a skerrick of the eastern coast of Australia didn’t have a hobnail mark on it some where or so it seemed. Pessimism made me broody, and when I brood I brood over maps, and lo and behold what did I see but somewhere I hadn’t ever read about or heard about, complete with bits of country around the 4,000 feet mark.

And nobody had been there, either. After inspecting Parish maps, County maps, Military Surveys, Geological maps and Aeronautical Photos and writing to at least half the inhabitants of the 2,500 square miles – which makes about twenty of them – and gathering together some foolhardy types such as only a Bushwalking Club can produce, we got going. 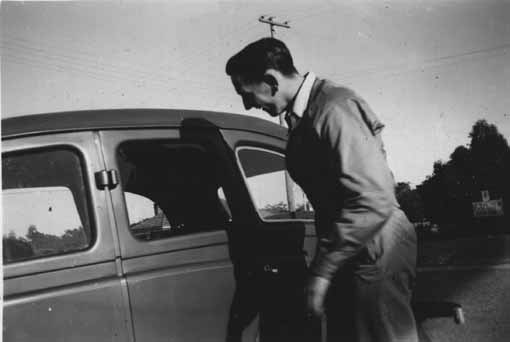 How we got there would receive a disapproving frown from the capitalistic elements, but we left Denman on the Goulburn River one Friday night which we spent in Garrawa Hall. The journey cost 2/- per head and four schooners.

The next morning we roadbashed much to the astonishment of the other half of the population I hadn’t written to. This King’s Creek was a pretty alley with cows and things and a few lumps of fossilised wood and flat floor and steep sides which we started climbing, after seven miles too far on the road. 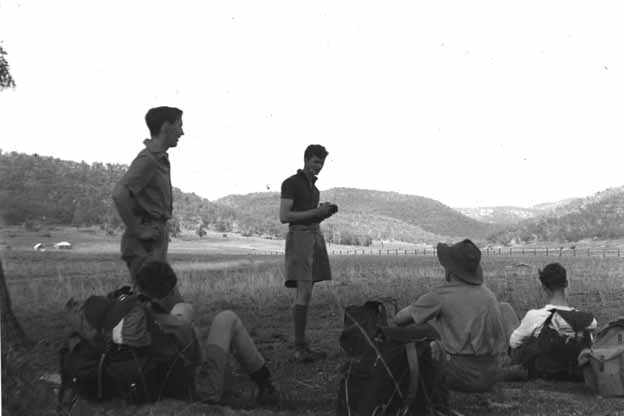 The top of the watershed wound around heads of innumerable creeklets and was very rough and very narrow. It rejoiced in a trig. station called Corner Hills which gives a 360° panorama all around the place from Barrington to Monundilla. It was also inscribed “Baerami Horror” after the tribulations that some locals had in its ascent.

Baerami Valley looked lovely from up top, and though we saw a sort of Carlon’s down below we were kept out of the valley until nigh on sun set. A request for milk resulted in 2/3 pint of cream per stomach for tea, which actually turned us off cream for quite a while.

The Monundilla I mentioned before is a local highspot, basalt capped like Hay and King George, forty miles from the nearest pub in any direction, and this is what we were heading for. Baerami Creek starts up that way and has a road going up it half way there, so up the road we went next day.

More milk, tons of advice, a lift in some prehistoric machine, and oh! joy (tempered with thoughts of cream) we were at last being the first since the aborigines to walk over that bit of country. But I doubt if they did it for pleasure. We were told there was no road. As we had noticed its disappearance some five miles back, we were nonplussed.

It is a very pleasant creek, Baerami Creek, very pleasant, and very easy to follow. It has innumerable headwaters, but which one we were on we don’t know. In the middle of the afternoon we climbed out of it on to a ridge, and there was Monundilla. Much nearer now but not on this ridge – which ditched us in some unknown creek for the night.

We shall pass over the next few days in silence in memory of bush walkers who were bushwalkers. We were lost with only a glimpse of our mountain now and again. Between the nows and agains we were in the creeks. But somehow we stumbled on to the main ridge and stuck there until, much to our astonishment, Monundilla was in front of us, above us. We staggered up to the top a day later than as per schedule.

I shall leave the magnificent view for the next venturers to describe. The other astonishing thing was the prolific jungle growth at this altitude, just like Mt. Wilson. But the pleasant varies directly as the unpleasant and vice versa, and you’ve guessed it, so help me, having had lawyer vines and nettles yourselves.

On the other side of this four thousand foot “mound” we found a small tent-sized plateau, a little way off from a convenient soak. Wood, water and what not ,blessed our dirty socks; but the postulate of direct proportionality which you’ve just read brought on a westerly gale from sunset to sunrise exclusively.

And so on to the next day which was like all the others except that we covered twice as much ground and only one river. Here we were on the Hunter Range following the route of the old cattle duffers who lifted their pocket money from Putty and took it over Nullo Mt. to Denman. All went well this day and we followed the range fifteen miles, past the twin basaltic peaks and high sandstone cliffy lump of the three Kekeelbon Mts., getting lost on Mt. Brown further on, until we got to Coricudgy. From the Kekeelbons a cattle pad winds its way to Mt. Coricudgy, but it disappeared here and there gremlin like and only came to light on narrow saddles where it just couldn’t help it.

Around Coricudgy the scenery changed, what with hungry cattle and the effects of bushfires, and timber getters. I predict a fine flurry of conservationism when the place becomes more popular with bushwalkers, because although at the moment the fine timber on top of these basalt capped mountains is a bit out of the way, timber shortages may eventually lead to heavy inroads on these natural resources.

On the flanks of Coricudgy the track became a road which led out into The Ovens on the head of the Cudgegong River. Max Gentle knows this country and can tell you all about the road there from Kandos. So will I if you want to know, and more, but suffice to say we reached Rylstone two days later, after numerous friendly clashes with very interesting locals – a story unto itself. 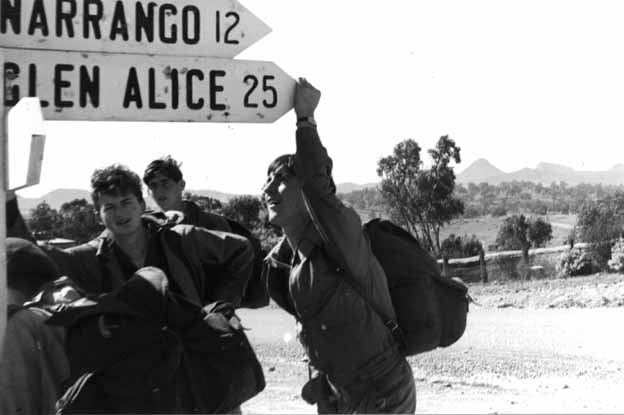 So now I feel pessimistic all over again. We’ve done it; we were the first to go right through on foot, and I’ll be going there again.

But I brood again, I brood.

Below is a copy of a letter and a hand drawn map of the “Woolomi” country drawn by Bill Clark.

You have certainly picked on a trip of trips this time, as you say the blank spaces on a map have a strange fascination for belated explorers of our ilk. Believe me, the route you suggest is a tough one. I have at times been over most of it east of the Woolomi Rv, as you will see by the enclosed rough map, or shall we say rough outline of this piece of Australia in question, at the most we have never been 10 miles west of the said River and that only in two spots, each of which were deuced tough, water being the main drawback. Your best plan on arrival at Putty would be to contact Mr Col or Austin Cobcroft (refer to map) who know this country west well & could on the spot direct you far better than any map, or for that matter any man in NSW.

Re supplies: I would advise you forwarding a quantity c/- of Mr W.R Merrick, Carrier, Putty (again refer to map) to Singleton Railway Stn. These he can collect & take to Putty & hold until you call. Firstly, this curse will save you carrying too heavy a load on the first leg of the trip, & secondly, will ensure adequate & fresh food for the last lap. By the way, Singleton (50 miles) will be your nearest town or store of any kind.

Being unaware of your experience at this type of mountaineering I am taking the liberty of giving just a few hints which I hope may be of some use to you.

1. A water bottle to each man, fill every time you strike water.

2. one 22 cal Rifle ample for the Party; practically no game to shoot.

4. Wax matches in a watertight tin.

5. Some form of waterproof coat.

7. Medicine, on no account leave without Chamberlains Colic remedy and Chlorodyne. Bad water or a change of water upsets the stomach quickly. Bandages etc.

8. Be careful all the time. A broken leg or sprained ankle 100 miles from help is no joke.

9. Allow for up & down hill on map distances. They measure in a straight line, say approx, if the map reads 10 miles, we have 20 miles to go.

10. lastly, never come to a hurried decision, far better to sleep on it, remember you can always back track if in trouble.

Trust I haven’t bored you, fellows, also trust you have a good trip; would appreciate hearing of it. 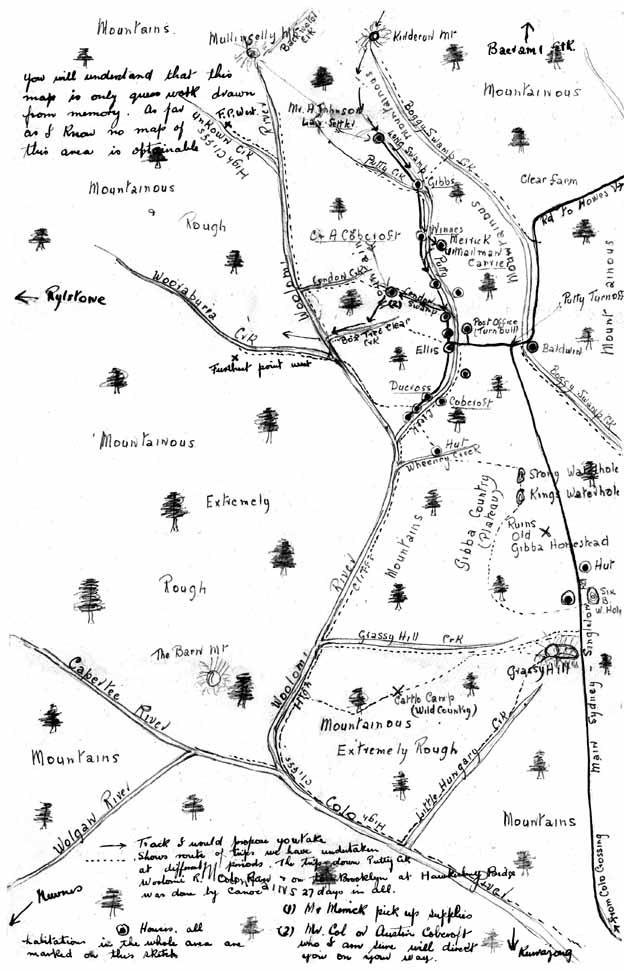 The nearest I got to going back to the lonely isolation of the scattered farmhouses of Nullo Mountain with Denis Robertson thirty years ago, and earlier this year the Olinda turnoff on the Rylstone – Glen Davis road, and the Arrowfield Winery east of Denman with Dorothy and my sister. A few weeks back I took a look at my photos of the trip for the first time in 48 years. What a scrubby bit of country, no wide canyons, no deep gorges! There’s a 4WD track along the Range now, and it could be an interesting half-day drive from Rylstone to Putty. But the memories are all the better for not trying to see it again. Monundilla’s basalt-soil forest probably hasn’t changed much, wattles and Hardenbergia must surely still glorify clearings in the spring, and while a new generation will be working them, the valleys will still be as pretty as ever. Olinda’s hall and its hony-tonk piano are probably no more, and the beer at Rylstone now can’t possibly taste as good as the first one did then.