The Freshers Walk of February 1978 was wet. Very wet. As were many (most?) of the subsequent memorable SUBW walks of the next decade: the great flood in the Budawangs in May 1978, the “water bed” trip to the Valley of the Trolls on the Routeburn track in New Zealand in 1982, the “bed sores” 8 days stuck at Square Lake in the Western Arthurs, the Chris “Cyclops” Cosgrove Fresher’s trip through the Royal National Park, nearly all the great Tassie trips through Cradle Mountain – Lake St Clair and along the South Coast track, the unintended “swim” near “994-Centre of the Universe” one August and the intended (but very cold) Mid-Winter Canyon discovery near Glen Davis. But I jump ahead of myself – the reminiscences of fantastic friendships and great scenery from a bushwalker not yet retired to the armchair but who has added some 24 kilos, a Goretex jacket, a wife and three children and two cars (and neither a Volvo)!!

I have not retained a copy of the 1978 summer walks program. I can guess that it was dominated by walks in the Blue Mountains led by the greats of that time and legends in their own lifetime: Dave Noble, Chris (“The Old Mole”) Cosgrove, Ross Bradstock and Adrian (“Ariadne”) Teague. The Young-uns (Nipper and Aidrie – “The Leaf Family”) Wilson, Chris (“Gutman”) Catt, Brad (“The Brigadier”) Phillips) and even Michael (“Ted Mack”) Maack and Roger (“Ramjet”) Lembit were not yet members.

The magic of the Blue Mountains was not only the great scenery but the fact that all walks were within walking distance (even if a long walk!) of the railway line. Cars (and tents) were usually in short supply.

In that program, there was a rather innocuous “Freshers Walk – Galong Creek – Cox’s River – Breakfast Creek” entry. It looked innocent enough.

The Freshers Walks, with their promise of a new talent of “Fresherettes”, were always good fun (especially the one a couple of years later featuring Willow Marshall, the memory of whose exploits at Little Marley still bring smiles to nearly 20 males’ faces about 17 years on).

The 1978 Freshers Walk was not my first. That had occurred in 1977 to the mighty Bluegum Forest – a truly magnificent place. However 1978 was to be one of the more memorable.

Fortunately (?!), enough cars were borrowed, stolen or whatever for the 30 or so participants to be chauffeured to Carlon’s Farm. On arrival, the proposed route changed. I do not recall why. It may have been the threatening weather. It may have been a shortage of tents. Whatever the reason, the route changed to the Wild Dog or Gangerang Mountains out past Debert’s Knob, to the huge camp cave at Mobbs’ Soak, down to the junction of Breakfast Creek and the Cox’s River, up Breakfast Creek and back to Carlon’s Farm. That was the theory!

Being young and silly (and poor!), I enthusiastically set off in my grey nylon raincoat, A-frame pack on my back (the same one which for years had been used to deliver dodgers), an old down sleeping bag and a new lilo in my pack.

I recall very little of Saturday’s walk except that the only dry period was spent at Mobbs’ Soak on Saturday night. No doubt there were lots of “Did you enjoy the trip?” “yes, I’ll come back next fall” jokes in the slippery conditions. No doubt also there would have been the excellent (!) camp fire singing, tales of great exploits, jokes (including “warming the (w)hole of my body over the camp fire and reflections on the occasion when Ross, after spending an afternoon at the pub, filled 8 piping hot tinnies), all washed down with copious quantities of port (the winner on the triumvirate of price, weight and alcoholic content per volume of liquid).

The rain continued all Saturday night in Noah’s Ark-type quantities. Keen to try out my new lilo, I beat a quick path down to the Breakfast Creek-Cox’s River Junction. I blew up my lilo. (A unique model somewhat narrower than the favoured Palma models and purchased at a bargain price at Moss Bros Disposal Stores in George Street). Encouraged by the friendly and helpful words of that expert, The Old Mole, to ensure I floated beyond the bluff of rocks on the left hand side of the river, I shot down the waves of the Cox’s River past the bluff. I was young and naive. However, as a recent student of vectors in HSC Physics, I could see the easiest way back was not around the rocks of the bluff but on the right bank of the river. Exiting on that side, and after a quick run up the river on the right bank, a very fast paddle across the river to come out just above the bluff and a short stroll up the river on the left bank, I was warmly welcomed by a grinning Old Mole. He enquired how I had enjoyed the traverse around the bluff. Indeed I had!

Breakfast Creek usually consists of a series of pools and runs a couple of centimetres deep. However the waters were rising. A rope was strung across. The first people crossing had no problems. Still the waters rose. By the time all were across, the waters were about chest deep. My recollection is that Ross volunteered as last to cross and was almost washed away. 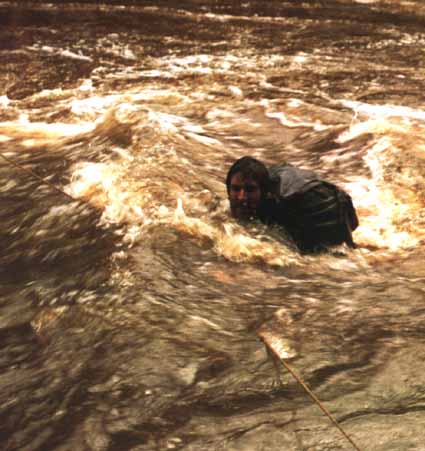 The trip back was via Iron Pot and along the ridge to Carlon’s Farm. Arriving at about 5.00 p.m., the cars were on the opposite side of what is usually a blackberry infested creek. The bridge between us and the cars was washed out. The telephone lines were down.

Steve McDowell, The Old Mole and I set off for Katoomba. I achieved a number of firsts – my first Carlon’s Head up the chains, my first “Neck” and my first experience of the “loaves and fishes” parable. Heading along the Neck in windy and wet conditions, still in my grey nylon raincoat, we stopped very briefly at the cave. Poor Steve McDowell suffered. He limped along, suffering cramps and slowing the pace. Finally arriving at the bus shelter near Katoomba Falls, I experienced for the first time how small supplies of food can miraculously appear following a walk. A feast of cheese, chocolate and fruit was consumed.

Calls were made to anxious parents at Katoomba Police Station. At about 11.00 p.m., we arrived at my grandparents’ house. Soup, party pies and sausage rolls followed. Steve and The Old Mole did not make it back to Sydney on Monday morning as intended. The SRA was upgrading the train track. Very small piles of earth had been left around the stanchions. With the big wet, the dirt had been washed away. The stanchions had fallen.

In about July of 1978, I was invited by The Old Mole and Dave to join them on a 3 Peaks trip. Only later did I find that I owed this “honour” to my baptism during the 1978 Fresher’s walk.

The attrition rate following most Fresher’s walks is high. 1978 was unusual. Most returned.

For me, that walk was to begin a decade of marvellous friendships and great enjoyment. There is no truth that 70% of the pleasure of bush walking is planning the trip, 70% telling people about it afterwards and minus 40% on the walk!