Early in the third term of 1946 I was fed up with spending half my days in a laboratory in the Chem department, and was not looking forward to November. I remembered with pleasure that in the .previous long vac I had gone for a long trip hitching to Kosiusko then walked for a week ending at Kiandra. This walk was led by Ian Ross and was the one long walk of the University Rover Crew for that vacation.

Although I knew I would have to take casual work for much of the three months university vacation, I decided that I wanted on to go on several very long bushwalks. Such walks should not be done alone. Having been a boy scout in Sydney I was a member of a suburban rover crew. However all my mates in this crew were working, and the crew would not be organizing a long walk. I thought of joining the Sydney Bushwalkers but I knew nothing about them. I expected that they would be “old fogies” who because of their work would not be interested in the long walks I wanted. The obvious solution was a university club. As none existed I then though it would be a good idea to start one. Even though I suspected that SBW would not like it I though it would be a good idea to call it SUBW.

At first I got nowhere. The general reaction was that it was a good idea but the exams were too close and we should wait until they were over. This meant no walks that year, so I persisted. Finally I spoke to Vern Gilbert who fully agreed. From then on things went very quickly. Vern recruited his friend Quentin Burke, and others quickly joined us.

We then had an informal meeting, booked a lecture hall for an inaugural meeting, and sent a notice to Honi Soit. At this stage we were heavily from Science II. We then recognised that we would need a chairman for the meeting. Ian Ross was suggest as a good bushwalker who had all the attributes needed for a good chairman. When we approached Ian, his initial reaction was that it should be deferred until after November but immediately appreciated that earlier action was needed for the coming long vac. Incidentally Ian’s involvement in SUBW’s foundation did not prevent him gaining the University Medal that year.

I was amazed at the numbers that came to the inaugural meeting. It was an idea whose time had come. We had booked the Botany lecture theater and it was nearly full with students from all faculties and years. Ian Ross was an excellent chairman and the SUBW was formed with Ian as its initial President.

At the meeting we were mostly strangers to each other and although I stood for Walks Secretary I was not elected. This was fortunate for I knew nothing about the job. When I was elected the next year I could follow the excellent model that Fred Doutch had established. 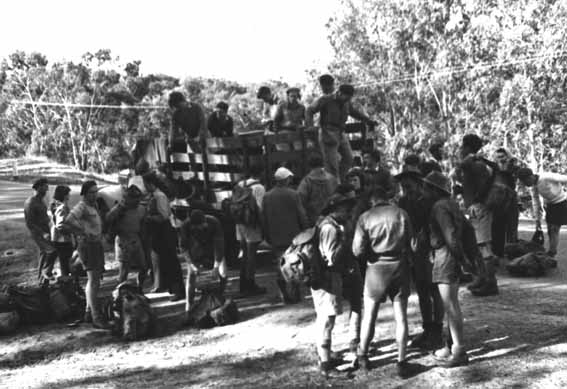 Above – Returning from the Second SUBW Marathon, 1949. “How did we all fit into the track? – Like sardines!”. Photo – Denis Robinson.